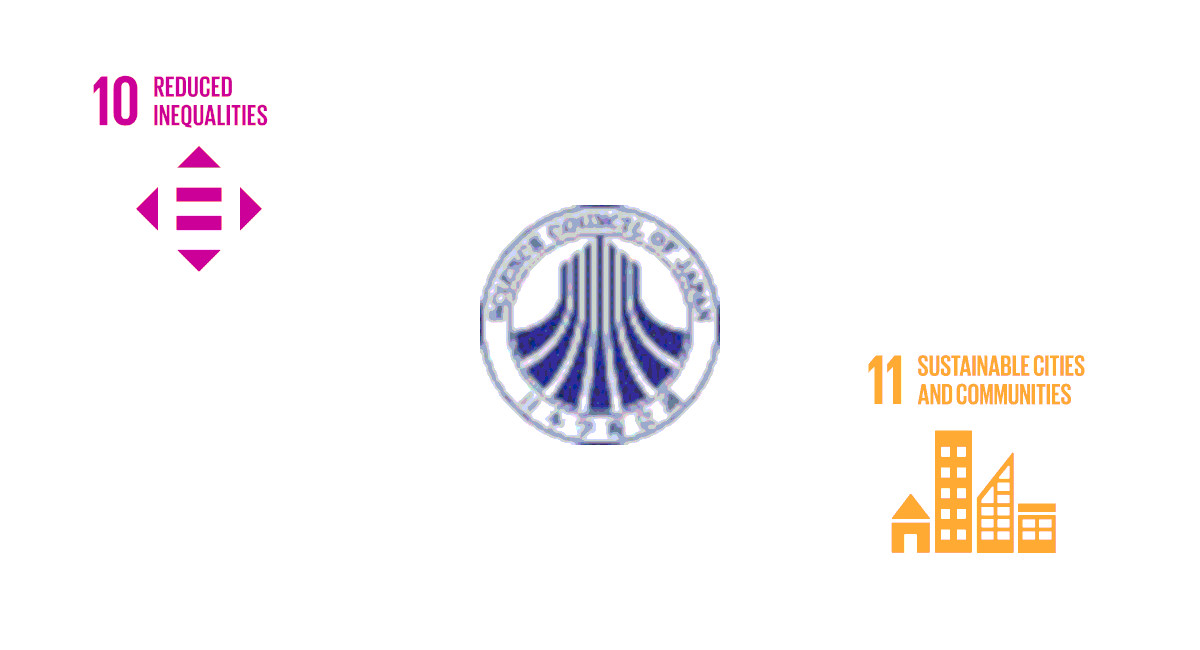 The Science Council of Japan made the very interesting exercise of classifying the resolutions it adopted in the period 2014-2017 according to the SDGs. Let’s have a look at SDG10 and SDG11.

Elimination of economic inequality: recommendation for building the “inclusive society”

The in-work poverty and deterioration of working conditions, including long working hours, have become huge social problems in Japan. This document recommends to the Japanese government to reformulate its social and labor policies to incorporate the principle of “social inclusion” at its core, and suggests actual reform ideas in its social security, public assistance, education, and labor systems.

Evacuees of the Fukushima nuclear accident should not be forced to select either returning to the original home town or completely moving to other places. SCJ recommends keeping a “designated municipality” for the time being, under the Nuclear Power Plant Evacuees Special Law, and proposes to establish a system that allows evacuees to maintain ties with both evacuation sources and destination municipalities. Having possible similar cases in mind, the Japanese government should develop new systems such as “Special Residents” for people who keep resident registration in the original municipalities and “Specific Relocated Residents” for those who transferred registration.

City where we can continue living even if an earthquake occurs: toward disaster-proof mega cities (including earthquakes)

Tokyo is one of the largest cities in the world, and is the capital of Japan, a heavily earthquake-prone country. The Japanese population and much of its functionality are highly concentrated in Tokyo. Since the Japanese government may be unable to respond properly following such a major disaster, countermeasures should be carefully prepared. These countermeasures shall focus not only on post-earthquake recovery, but also on a long-term seismic-resisting strategy accompanied by drastic structural changes to the city aimed at reducing risk. These efforts shall be carried out cooperatively by various groups, such as individuals, families, companies, municipalities, and the government.

Delivery of scientific achievements to society for disaster reduction: promotion of cooperation and co-creation by science and society toward reduction of disasters and formation of a sustainable society

Many scientists in Japan are doing research aimed at alleviating disasters and forming a more sustainable society. However, good research does not always reach society, nor is it justly appreciated by society. JSC recommends provision of the places for cooperation and co-creation of science and society toward reduction of disasters, provision of the opportunities for education and learning that form their bases, and further development and release of the regional information useful for reduction and mitigation of disasters.

Deliver our discussion to the world further: disaster risk reduction and promotion of international research on disaster prevention and mitigation – recommendations for implementation of the Sendai framework for disaster reduction and Tokyo Statement

We should achieve disaster prevention and disaster reduction all over the world through international cooperation as well as in Japan. The SCJ held its “Tokyo Conference for International Studies on Disaster Prevention and Reduction” in January, 2015. By presenting the results of the discussion here to the “Tokyo Declaration” and “Tokyo Action Guidelines” to the international community, the importance of science and technology in the “Sendai disaster reduction framework” was adopted at the United Nations World Conference on Disaster Reduction in March of the same year. This proposal summarizes these discussions and comprehensively presents the matters to be implemented in cooperation from all over the world in terms of science and technology, the implementing body and concrete activities, and actions to be taken by Japan.