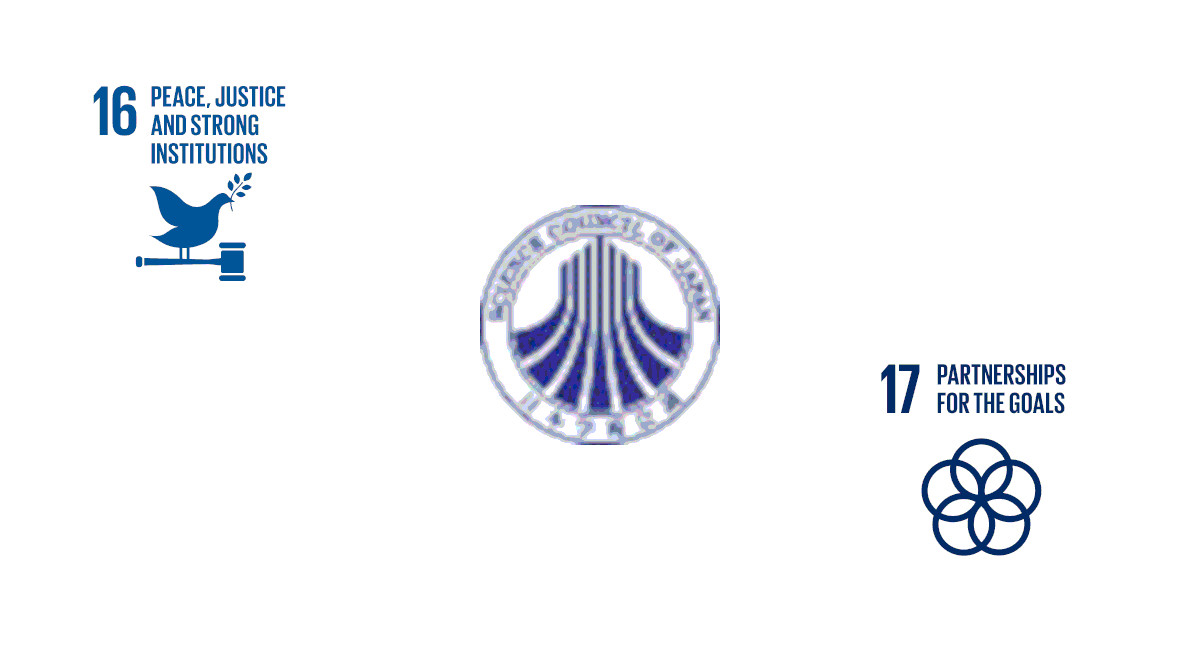 The Science Council of Japan made the very interesting exercise of classifying the resolutions it adopted in the period 2014-2017 according to the SDGs. Let’s have a look at SDG16 and SDG17.

Prevention of research results from being used for war and terrorism: dual use problem on pathogen research

The pressing concern that pathogens could be used as bacterial weapons and cause bioterrorism is becoming a reality. For instance, the urgent concern of scientific researches on high-pathogenic avian influenza caused by specific genetic mutations could be potentially abused by terrorism has been raised in 2011. SCJ recommends the measure to disseminate among researchers the possible risks in pursuing pathogen research and propose recommendations for the relevant education and management.

The subjects of “politics and economics” at high school and the basic knowledge of political institutions about political education were merely acquired in public education in Japan, to maintain neutrality. However, education that balances neutrality and participation learning is newly needed, as the age of voting rights has been lowered to 18 years and new subjects “public(tentative name)” are introduced. Therefore, SCJ recommends concrete measures of education to cultivate the ability to participate actively in the formation of the state and society by students acquiring the ability to understand the political issues themselves and to analyze and judge complex phenomena.

SDG17: Partnerships for the goals

Toward realizing a sustainable global society – promotion of Future Earth

Future Earth (FE) is an international program by collaboration with the scientific community, UN agencies, and other organizations to promote research to deal with various global environmental issues at the regional and national levels related to SDGs. It is pursuing a number of interdisciplinary international collaborative research projects, with the aim of solving issues such as water, energy, climate, ocean, ecosystem, and cities. One of the five international headquarters secretariats of FE is in Japan, and the SCJ is in charge of its operation. This recommendation calls for promotion of FE in Japan to all scientific communities and stakeholders (policymakers, enterprises, local governments, media, education officials, citizen groups, etc.).

How do we prevent disasters such as major fires and building collapses that are expected to occur in cities during a major earthquake? According to conventional earthquake resistance standards in Japan, it was supposed to prevent building collapse against the level of earthquake motion occurring just once in 475 years (10% probability in 50 years). On the other hand, the criteria have been revised to assume the earthquake ground motion of the level once occurring in 2475 (the probability of 2% in 50 years). SCJ recommended 11 items based on the latest scientific knowledge and its expanded imagination.

To eliminate poverty in developing countries, it is extremely important to achieve industrial development, to create employment, and to improve the standard of living. However, there is no widely accepted strategy for industrial development. To provide more effective development support, Japan, which has an abundant proven track record of assisting developing countries in Asia, should develop support strategies by taking advantage of its experience.