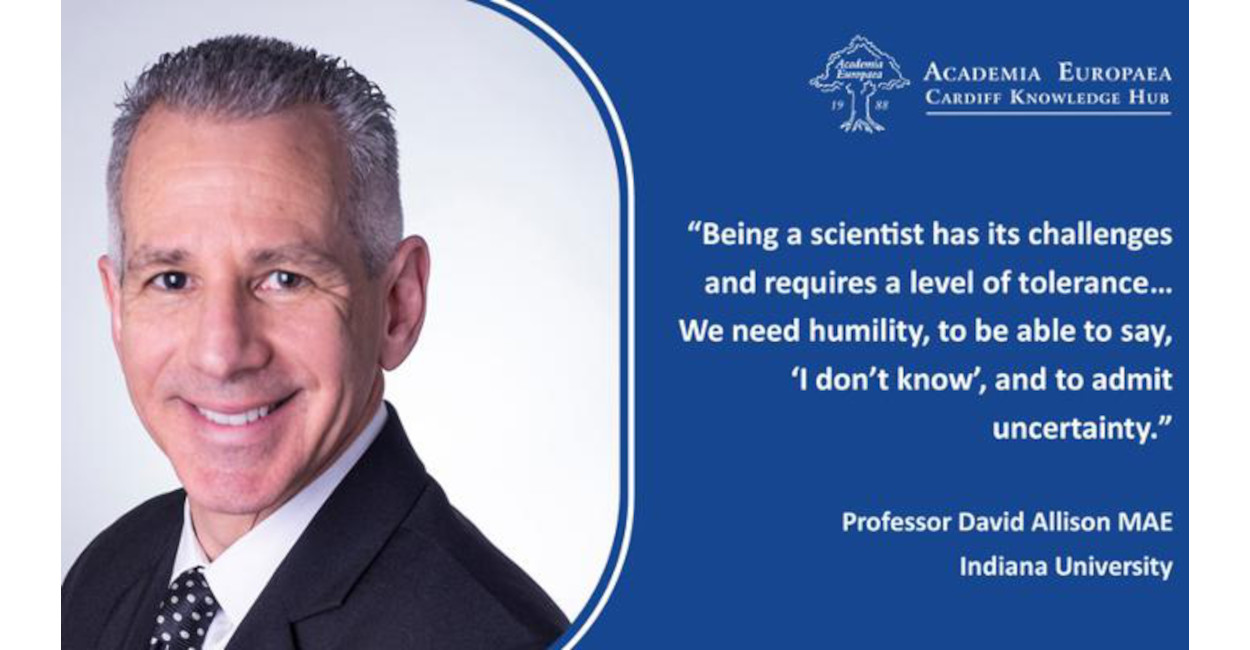 In an interview with Academia Europaea Cardiff Knowledge Hub, Prof. David Allison of Indiana University talks about obesity, nutrition and his passion for evidence-informed policymaking.

David Allison MAE is Dean, Distinguished Professor, and Provost Professor in the School of Public Health-Bloomington at Indiana University. His fields of scholarship include nutrition, obesity, behavioural medicine and medical psychology. He has authored over 500 scientific publications and received many awards, including the 2002 Lilly Scientific Achievement Award from The Obesity Society.

You are a strong advocate for scientific rigour and establishing a strong evidence base for policymaking. What has led you to taking this stance?

“From a young age, I have always asked the question, ‘why?’  When training as a researcher, I wanted to understand the evidence I was seeing rather than just accept it. I hope this natural scepticism has made me into a reasonably good scientist.

“Being a scientist has its challenges and requires a level of tolerance. We need to be tolerant when some groups in society oppose what we are doing. We need humility, to be able to say, ‘I don’t know’, and to admit uncertainty. Today, though science may be as or more rigorous than it ever was, there is always opportunity for strengthening academic rigour. We must tackle cases of error, obfuscation, exaggeration, and hype. The report of the National Academies of Sciences, Engineering and Medicine’s, Reproducibility and Replicability in Science (2019), for which I was a panel member, concluded that there is no crisis, but also no room for complacency.

“When it comes to science for policy, there is a misconception that science should drive policy. In reality, there are additional factors involved, for example, social, economic, and political priorities and values. As scientists, we should therefore make a distinction between being advocates for evidence-informed rather than evidence-based policy.”

What are you aiming to achieve with the Strategic Council for Research Excellence, Integrity and Trust?

“The Council is an initiative of the National Academies of Sciences, Engineering, and Medicine. I am one of three co-chairs. We are still refining our remit, with President Marcia McNutt’s leadership, but our main aim is to increase the quality, integrity, efficiency, and impact of the science being done in the world.

“I have my own personal views on what might be done, although I stress that these do not necessarily represent the views of the Council. Regarding quality, William Bruce Cameron mused that “Not everything that can be counted counts, and not everything that counts can be counted”[1], but surely what gets counted, ranked, and rewarded gets attended to and sought after. Numbers of publications, grant dollars, and citations are relatively easy to count. The establishment of methods for counting research quality to compare investigators’, funders’, institutions’, and publishers’ output quality in uniform, credible, high-throughput ways could plausibly drive a sea change in what constitutes ‘bragging rights’ in science and a radical increase in research rigour.

“Regarding efficiency, an example to promote gain would be to agree on a single, unified disclosure of interests forms to replace the myriad different forms we have now. We could then publish and link this standardised form to the author’s ORCID. Regarding integrity, there can also be measures taken. Training is one example. Another is the vital role of journal editors in preventing errors or, when that is not possible, correcting them.

“Regarding impact, how we catalyse science that is truly impactful. Can we predict that in advance? Should we invest more in ‘people than projects’? Perhaps we need to differentially train, select, and incentivise grant application reviewers to value creativity and risk taking more? Arguably we need more (and not less as some have opined) big prizes for the pursuit of bold risky science and the attainment of good results even when such attainment may reflect luck as much as skill and also provoke what some call ‘hypercompetitiveness’?

“Lastly, we should think about how to make science a welcoming place for everyone, regardless of gender, age, ethnicity, sexual orientation, or any other factor besides willingness and ability to contribute positively to the scientific process. This is so for at least three reasons. First, doing so will bring a greater breadth of insight to the scientific process. Second, doing so allows science to draw on the best hearts and minds from the entire pool of humanity and not just a subset. Finally, it is simply the right thing to do.”

Within your own field of obesity and nutrition, what does the evidence tell us about what works in tackling obesity and promoting nutrition? Are there any examples of good practice you’d point to?

“The answer many people want to hear is nutrition and exercise initiatives like farmers’ markets, dance classes, and cookery lessons in schools. Those are great ideas but so far, there’s no compelling evidence that they are effective. The intervention that is most clearly demonstrated to have a powerful effect, not only on weight or body fat, but also on health, longevity, and quality of life, is unequivocally bariatric surgery. The second impressive area of evidence is medications, where some are starting to rival surgery. In the last few years, clinical trials show not only that do some FDA-approved pharmaceuticals lead to weight loss and fat loss, but actually prolong life in humans.

“In terms of diet and exercise, there it gets tricky. We know that adhering to some diet and exercise plans leads to weight loss or fat loss. However, trying to adhere to dieting and exercise plans results in modest long-term weight loss and fat loss, at best. Trying is a very different thing than actually following the diet or doing the exercise. Trying, even trying hard by good people with good intentions, unfortunately tends not to be all that effective in the long run for most people.”

What do you see as priorities in terms of research and policy development in your field, over the coming decade?  Are you optimistic that we are heading in the right direction in terms of policy goals?

“In the field of nutrition and obesity, and in other fields as well, we need a much more serious commitment to truthful communication about the evidence base. We need to have all the evidence out there in the most unvarnished, complete, truthful and unexaggerated manner. And only then can we start to say what we want to do with that evidence. I think that is vitally important. We need an ironclad commitment to that.”

What are you working on right now, and has the pandemic affected your plans?

“I’m working on many things. One of things I’ve always enjoyed is having a broad range of research, from the relatively basic to the very applied, from diets and exercise to pharmaceuticals and surgery, from model organisms to human clinical trials, from evolutionary and ecological to molecular and cellular. Intercurrently, some of my more impactful research has been in the area of senescence and healthy ageing.

“With other researchers, we’re looking at a range of issues, including the biology of ageing and how energy intake affects that. Using both model organisms and epidemiology, we are studying transgenerational effects, such as how your mother or father’s BMI affects the relationship between your BMI and your mortality rate, and also, how weight change affects the rate of ageing. And then, how does all this relate to COVID-19 and other age-sensitive immunologic factors.

“We had a paper in Science, led by our colleagues in the Mayo Clinic (Paul Robbins, James Kirkland and others) on coronaviruses and how they affect the accumulation of senescent cells in mice, and how using substances called senolytics, that reduce senescent cells in the body, lead to greater resistance to negative health effects and death-inducing effects of coronaviruses and related viruses in mice. Examining healthy ageing is a challenging and important area of research; it can require long-term study over decades involving thousands of people. There are biomarkers of ageing that we are looking into, all through the lens of good quantitative science, rigour, reproducibility, and transparency. In short, honest truthful reporting.”

This interview was first published by Academia Europaea.