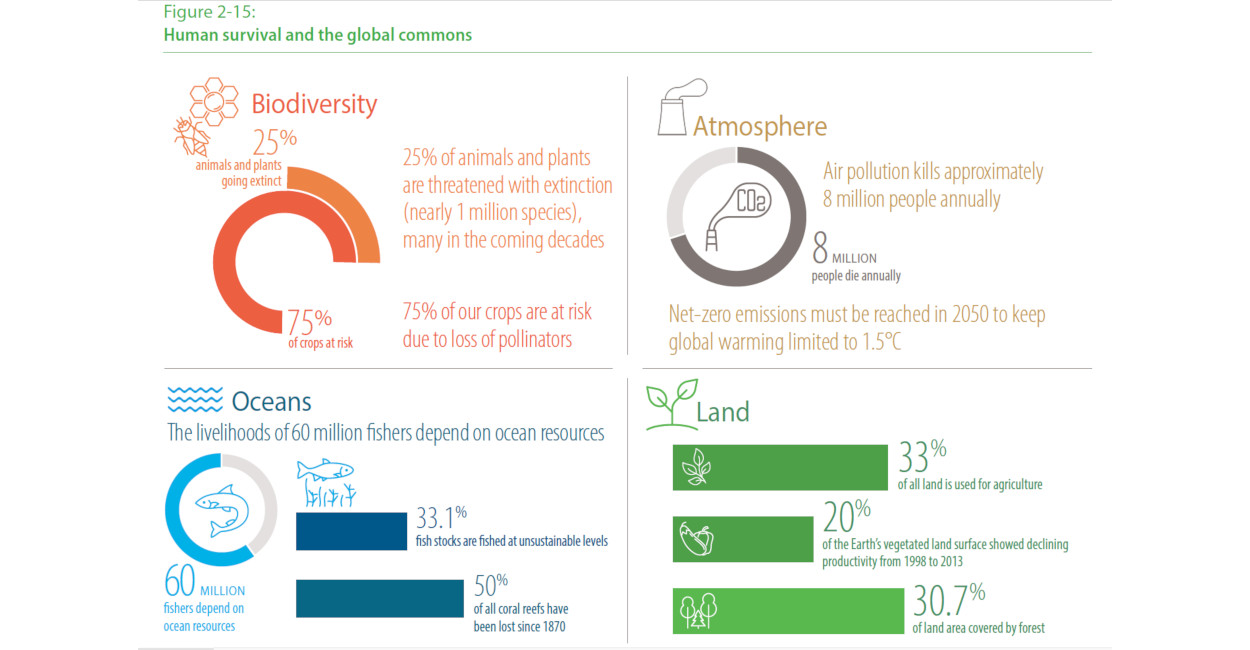 The governance of the global environmental commons is based (in principle) on results of basic science.

The sixth entry point determined by the authors of the report The Future is Now is about Global environmental commons. As science is, perhaps unexpectedly, present in different ways in this part, we will have four posts on this topic.

To begin, let’s have some definitions. What are we talking about when the topic is global environment commons ? The figure on top of this article may give an idea, but to be more precise, let’s just read what the authors write.

According to international law, global commons refers to four specific areas that fall outside of any national jurisdiction: the high seas, the atmosphere, Antarctica and outer space. Discussions of sustainable development and environmental protection have lately included other commons, which may lie within well-defined national or regional jurisdictions, but whose continuing existence confers benefits beyond them. Those include tropical rain forests, land, biodiversity and climate.

The current report focuses on the global environmental commons defined in that broader sense, comprising various large-scale biomes and systems that contribute directly or indirectly to the functioning of the Earth system and hence to supporting life, including biodiversity, the atmosphere, oceans, the cryosphere, forests and the hydrosphere.

Of much interest for us is that science is not only present in the Science and technology lever of transformation. Science is also at the base of the Governance lever related to the global commons.

Multilateral agreements and platforms, such as the United Nations Framework Convention on Climate Change, the Convention on Biological Diversity and the United Nations Convention to Combat Desertification, or the Strategic Approach to International Chemicals Management are mechanisms to protect the global commons and guarantee their global sustainable management. Importantly, each is supported by a formal scientific advisory body, the Intergovernmental Panel on Climate Change, the Intergovernmental Science-Policy Platform on Biodiversity and Ecosystem Services and the Committee on Science and Technology of the Convention.

All these advisory bodies gather scientists from the basic sciences. To give advices rooted in the better knowledge, as they are asked to, they must not only master the well established bases of science. They must also be among the ones who produce new knowledge. We cannot rely on past science to tackle the challenges of the present sustainable management of the global commons.

Of course the scientists themselves cannot take decisions on the sole basis of their advanced knowledge. They must explain the latests results, and help policy makers to understand the real consequences of different ways of actions.

… science diplomacy can improve the management of global commons and support partnerships to manage commons in conflicting contexts. Governments are likewise informed by science as they continue to work for the conservation and sustainable use of marine biological diversity of areas beyond national jurisdiction. Indeed, the Sustainable Development Goals themselves directly help regulate externalities felt beyond jurisdiction and scales.

The @USMF_Moldova is becoming a new supporter for @IYBSSD2022 . The mobilization is increasing worldwide!