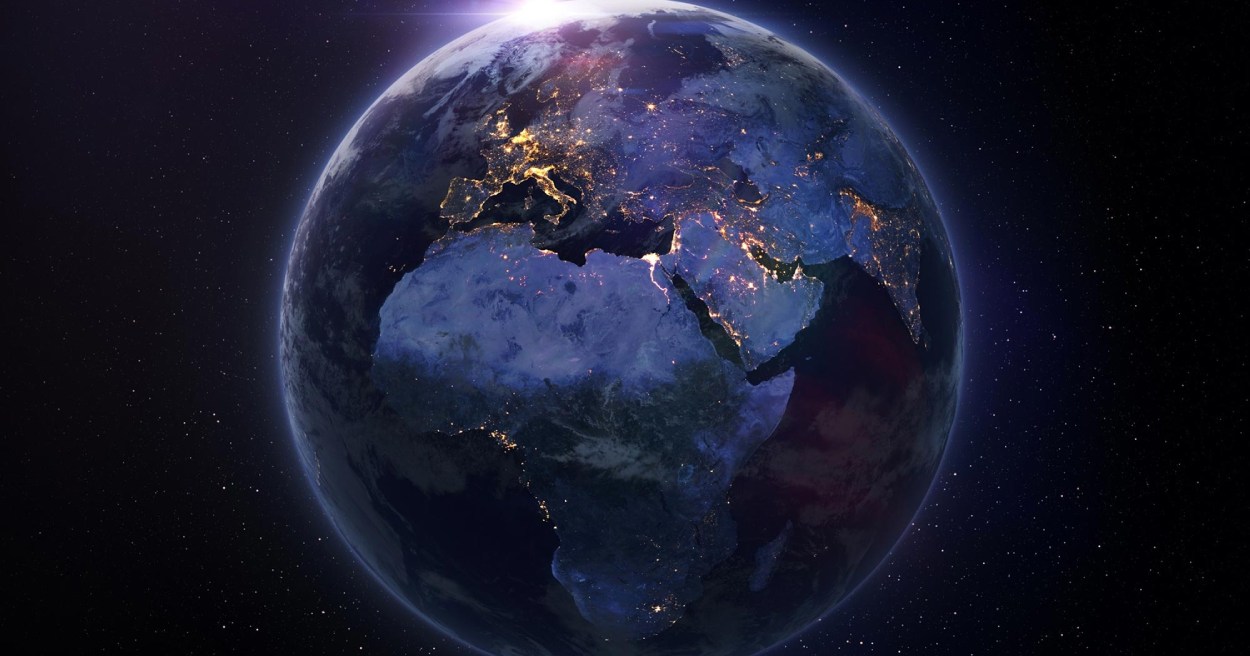 Researchers have been using satellite images of Earth at night to study human activity for almost 30 years and it is well established that these images – commonly referred to as nighttime radiance or nighttime lights – can help map issues like economic growth, poverty, and inequality, especially in places where data are lacking.

Traditionally, researchers have been more interested in using the data gathered from the lit areas with unlit areas typically being disregarded. In their study just published in Nature Communications, IIASA researchers and colleagues from several other institutions, however, specifically focused on the data from the unlit areas to estimate global economic wellbeing.

“Whereas previous work has focused more on the relationship between lit areas and economic development, we found that it actually also works the other way around and that unlit areas are a good indicator of poverty. By identifying those unlit areas we can target interventions for poverty alleviation and places to focus on to improve energy access,” explains study author and IIASA Strategic Initiatives Program Director, Steffen Fritz.

The researchers used a harmonized geo-spatial wealth index for households in various countries across Africa, Asia, and the Americas calculated by the Demographic and Health Surveys (DHS) program, which places individual households on a continuous scale of relative wealth from poorer to richer.

They then combined this data with data from satellite images of global nighttime lights in these countries and found that 19% of the planet’s total settlement footprint had no detectable artificial radiance associated with it. The majority of unlit settlement footprints were found in Africa (39%) and Asia (23%). If only rural unlit infrastructure is considered, these numbers rise to 65% for Africa and 40% for Asia.

In almost all countries, the results indicate a clear association between increasing percentages of unlit communities in a country and decreasing economic wellbeing levels.

“We were able to map and predict the wealth class of around 2.4 million households for 49 countries spread across Africa, Asia, and the Americas based on the percentage of unlit settlements detected using nighttime light satellite images with an overall accuracy of 87%. Surprisingly, there were also relatively large amounts of unlit settlements in developed countries, in particular Europe. There can be several reasons for this result, including the fact that the satellite overpass is after midnight, but it could also be due to conscientious energy and cost saving policies in Europe by homeowners, governments, and industry,” says IIASA Novel Data Ecosystems for Sustainability Research Group Leader, Ian McCallum, who led the study.

The researchers note that government agencies typically prioritize expanding electricity access for urban, rather than rural areas. Rural electrification however holds great promise for increasing wellbeing and can also have significant positive impacts in terms of household income, expenditure, health, and education.

The United Nations (UN) Sustainable Development Goals (SDGs) specifically include ‘access to affordable, reliable, sustainable and modern energy for all’ and while efforts are underway to achieve this goal, and substantial progress has been made over the past two decades, indications are that governments and industry will struggle to keep pace with expected population growth.

In sub-Saharan Africa in particular, projections indicate that over 300 million people will still be living in extreme poverty by 2030. The impacts of the COVID-19 pandemic are likely to push an additional 88 to 115 million people into extreme poverty in 2030, setting back the UN’s goals to reduce poverty by around three years. Studies like this one can however help track developing countries as they electrify and developed nations as they reduce their light-energy consumption.

“If applied over time, the method we used in our study could provide opportunities to track wellbeing and progress toward the SDGs. In terms of policy, it can help better inform energy policy around the globe and can also be helpful in shaping aid policy by ensuring that we are reaching those remote rural areas that are likely energy poor. In addition, it could be useful to detect signs of sustainable and environmental management of lighting in the developed world,” concludes Transformative Institutional and Social Solutions Research Group Leader, Shonali Pachauri.