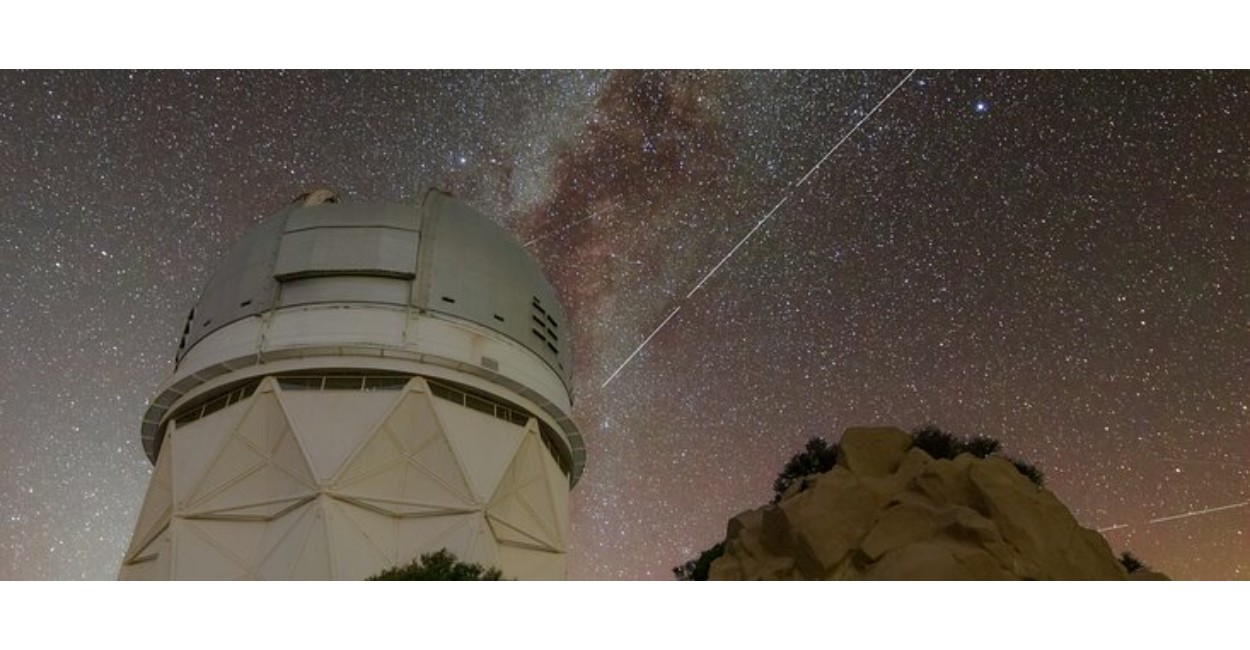 Measurements have revealed that BlueWalker 3, a low Earth orbiting satellite, is now one of the brightest objects in the night sky. But the satellite’s use of terrestrial frequencies poses a new challenge to radio astronomy.

The International Astronomical Union Center for the Protection of the Dark and Quiet Sky from Satellite Constellation Interference expresses concern about the recently launched prototype BlueWalker 3 satellite’s impact on astronomy. New measurements reveal that this low Earth orbiting satellite is now one of the brightest objects in the night sky, outshining all but the brightest stars. In addition, the satellite’s use of terrestrial radio frequencies poses a new challenge to radio astronomy.

One of the brightest objects

New measurements by observers worldwide, coordinated by the International Astronomical Union’s CPS (IAU Center for the Protection of the Dark and Quiet Sky from Satellite Constellation Interference), show that this satellite has become one of the brightest objects in the night sky — more so than other constellation satellites and at times as bright as some of the most recognizable stars [1].

Besides their visible brightness, these new satellites, which serve as “cell phone towers in space,” will transmit strong radio waves at frequencies currently reserved for terrestrial cell-phone communications. These orbiting transmitters, which are not subject to the same radio quiet zone restrictions [2] as ground-based cellular networks, have the potential to severely impact radio astronomy research as well as geodesy studies and space-physics experiments.

The IAU and its CPS co-hosts, NSF’s NOIRLab and the SKA Observatory (SKAO), are concerned about the impact these satellites will have on fundamental research and humanity’s ability to experience the natural night sky.

“Astronomers build radio telescopes as far away as possible from human activity, looking for places on the planet where there is limited or no cell phone coverage. Frequencies allocated to cell phones are already challenging to observe even in radio quiet zones we have created for our facilities. New satellites such as BlueWalker 3 have the potential to worsen this situation and compromise our ability to do science if not properly mitigated,” said SKAO Director-General Philip Diamond. “This is a key reason why the SKAO is deeply involved in the IAU CPS and promoting the equitable and sustainable use of space.”

The night sky is a unique laboratory that allows scientists to conduct experiments that cannot be done in terrestrial laboratories. Astronomical observations have provided insights into fundamental physics and other research at the boundaries of our knowledge and changed humanity’s view of our place in the cosmos. The pristine night sky is also an important part of humanity’s shared cultural heritage and should be protected for society at large and for future generations.

“BlueWalker 3 is a big shift in the constellation satellite issue and should give us all reason to pause,” said Piero Benvenuti, Director of the IAU CPS.

The IAU and CPS partners recognize that the new satellite constellations have an important role in improving worldwide communications. However, their interference with astronomical observations could severely hamper progress in our understanding of the cosmos. Their deployment should therefore be conducted with due consideration of their side effects and with efforts made to minimize their impact on astronomy.

The IAU recently wrote a letter on behalf of the global astronomy community to the U.S. Federal Communications Commission (FCC) urging them to seriously consider the potential impacts of satellite constellations on astronomy, the appearance of the night sky, and the environment. Earlier this month, the FCC announced its intention to create an office dedicated to space, to better deal with this rapidly emerging issue, an action that the IAU CPS applauds.

Conversations between the IAU CPS and AST SpaceMobile have started. The IAU CPS fosters dialogue and cooperation between satellite operators and scientists. Recent discussions with some operators have led to mitigation measures but much more work is needed.

[1] The measurements show that BlueWalker 3 is around apparent visual magnitude 1 at its brightest — almost as bright as Antares or Spica (the 15th and 16th brightest stars in the night sky). Apparent magnitude in astronomy is a measure of the brightness of a star or other astronomical object as observed from Earth. The scale is reverse logarithmic: the brighter an object is, the lower its magnitude number. The brightest astronomical objects have negative apparent magnitudes: for example, Venus at −4.2 or Sirius at −1.46. The faintest stars visible with the naked eye on the darkest night have apparent magnitudes of about +6.5.

[2] There are several areas around the globe that have special protections for radio astronomy that prescribe how fixed radio transmitters can be used so they do not interfere with astronomical observations. The United States National Radio Quiet Zone is a 13,000 square mile (34,000 square kilometer) region in which broadcast antennas must operate at reduced power and use highly directional antennas.