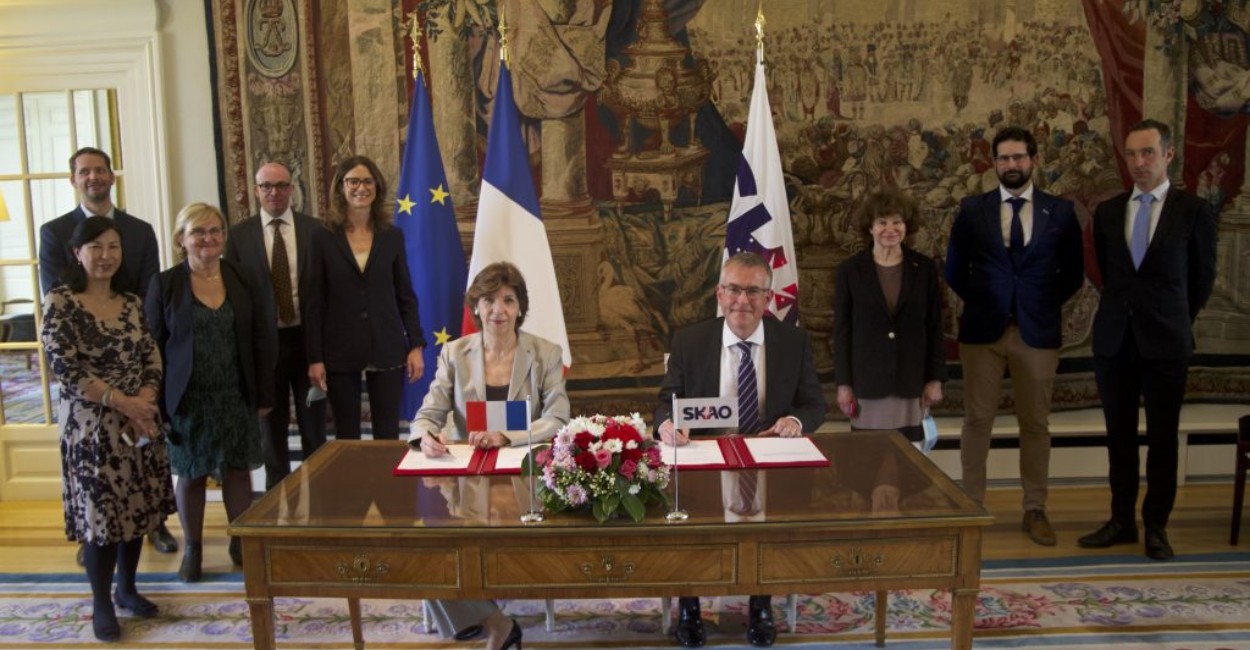 France will soon join the SKA Observatory (SKAO) as a full member. This is after the French government signed an accession agreement with the Observatory on Monday, 11 April 2022.

The signing ceremony took place at the French embassy in London with Her Excellency Ambassador Catherine Colonna doing the honours on behalf of the French Republic and the Head of the Director-General’s Office Dr Simon Berry signing for the Observatory.

In attendance was the Chair of the SKAO Council, Dr Catherine Cesarsky, representatives from the SKAO and the French Ministry of Higher Education, Research and Innovation, and the Director of Maison SKA-France, Dr Chiara Ferrari.

“I am delighted to sign this crucial scientific agreement which will allow France to join the SKAO,” said Ambassador Catherine Colonna. “This signature reflects the interest of my country to play a major role at the international and inter-governmental level not only to increase our basic knowledge in astrophysics but also to understand the origin and to follow the evolution of our planet.”

Following a decision by the SKAO Council and confirmation of intent by President Emmanuel Macron in 2021, the signature of the agreement means that France will now start the process of ratifying the Convention establishing the SKAO through its national processes. The resulting international instrument of accession will then be deposited at the British government’s Foreign, Commonwealth and Development Office in London, as the depositary of the Observatory Convention, to formally complete the membership process.

Until then, French participation in the Observatory is possible through the cooperation agreement that the National Centre for Scientific Research (CNRS) signed with the SKAO on 7 March 2022. French engineers helped design the SKA telescope dishes, low-frequency antennas, receivers, and signal processors during the project’s preconstruction phase while French scientists have been involved in each of the SKAO Science Working Groups.

“I am delighted that France has now initiated the process of joining the SKAO as a full member,” said the SKAO’s Director-General, Prof. Philip Diamond. “We have relied on the expertise of our French colleagues in radio astronomy, processing, and technology over the years and I look forward to their valued contributions in reaching the SKAO’s ambitious goals. To our French friends, I say bienvenue!”

Dr Cesarsky added: “The Council has always been keen to attract a wide international participation in the SKA project and so I’m delighted to see France realise the President’s intent and make a strong commitment to this growing intergovernmental observatory.”

SKAO membership is growing apace, with Switzerland having joined the Observatory’s seven founding members – Australia, China, Italy, the Netherlands, Portugal, South Africa, and the United Kingdom – at the end of 2021.