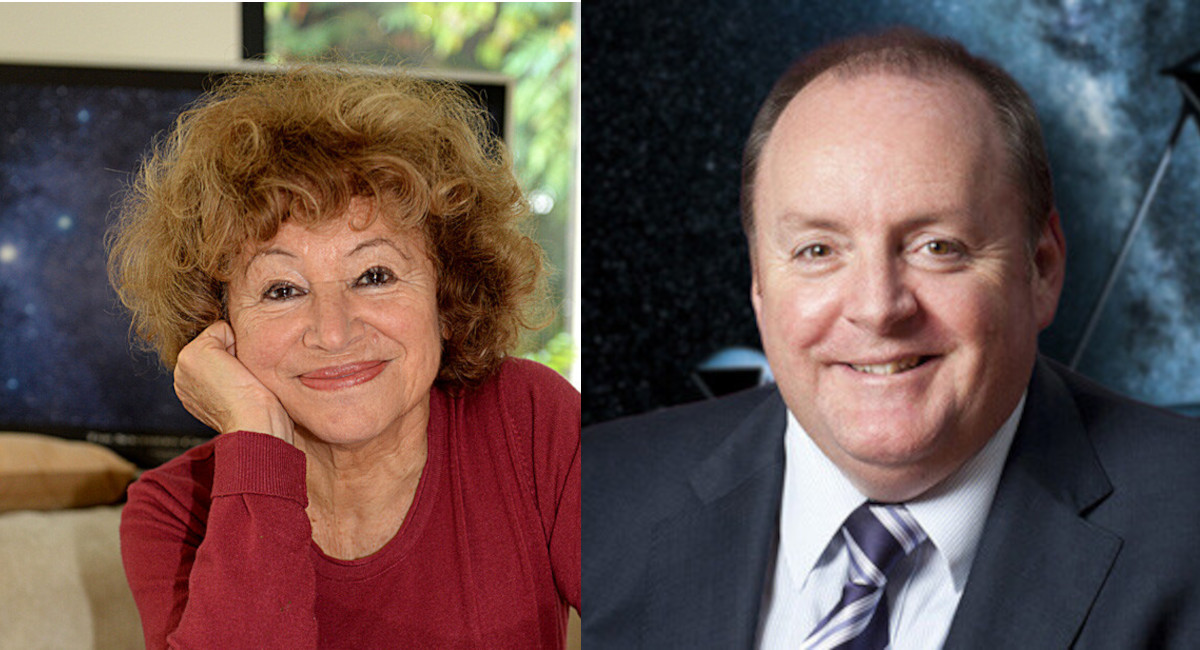 You both have a great deal of experience of major science projects and observatories. What does the start of SKAO mean for astronomy in your view?

Catherine: It’s a very special event. We are entering an era when giant telescopes will work together in the coming decades to try to understand the mysteries of the Universe – SKAO will be a key part of that.

Phil: From any angle at which you look at this, it’s a significant event for world astronomy. It’s the birth of a new observatory, and not just any observatory either. This is one of the mega-science facilities of the 21st century, so for our community, this is about participating in one of the great scientific adventures of the coming decades.

The SKAO Council has chosen you as the leaders who will guide us on this next phase of the journey towards construction and operations. What does that mean to you?

Catherine: We are indeed beginning a new phase, and I am delighted to have been asked to chair the SKAO Council. All I can say is that I’ll bring all the experience I’ve acquired over my career on large international projects and at large facilities in order to best serve the Council.

Phil: On a personal basis it’s wonderful – it’s the culmination of an almost 30-year long journey. It’s a privilege and an honour that the various governments, the Council and the members have that trust in me. I’m aware of the burden of responsibility to make sure we deliver on the promise and on the expectations of the members, the SKA community and the taxpayers.

It seems like it has been a long road to get us here, is this kind of timeline unusual?

Phil: No, it’s not unusual; space projects have similar gestation periods, as do sister projects on the ground. The ALMA Observatory in Chile took more than two decades from the early discussions until the start of operations, with the success that we know. Projects like the VLA may have gone a little more quickly, but that was designed and built by a single well-funded organisation in the US. The detailed design work on the SKA has only occurred in the last few years, since 2013.

Catherine: You have to have patience because these big international projects take time to bring it all together. Now we are celebrating the birth of the Observatory but behind it all there are many years of work by many people all over the world, as well as countries that had the vision to get deeply involved.

Phil: No and that’s really exemplified by the huge interest that we have in the 2021 SKA science meeting, where we are oversubscribed by a factor of eight for the number of talks we are able to accommodate. If that can translate in the future to an oversubscription in observing time, we’ll have done our job very well.

Catherine: As an outsider – before I got formally involved as Chair of the Board of the SKA Organisation –, I have also witnessed such interest growing over the last decade. The organisation did a good job in delivering on many fronts since the telescope site decision in 2012, cementing its place in policy-circles and garnering trust and confidence from governments and decisionmakers, in addition to the scientific and engineering community.

We’ve spoken about the significance of this moment for astronomy, but the wider impact of the SKA is a big focus as well and forms a significant part of the Construction Proposal.

Catherine: All major science facilities, in order to develop the cutting edge instrumentation that they require, make innovations and generate spin-offs. Many of those translate into innovations that benefit society as a whole. There are some excellent examples: CERN with the world wide web, radio astronomy with WiFi, those are both well known.

Phil: Here’s another one that people might not know so well: without radio astronomy GPS wouldn’t work because GPS requires the exact rotational parameters of the Earth, which are determined by radio astronomy. It’s part of our responsibility in spending taxpayers’ money to maximise the return to society. Within SKAO a lot of our partners are focused on translating their innovations into societal benefits and we’ve already seen some spinoff companies emerge out of their SKA design work. We also see benefits arriving in our telescope host countries, where governments are using radio astronomy to uplift human capital – people – to provide education and then employment opportunities.

Catherine: Then of course there are the intangible benefits – governments working together in a peaceful cooperative manner on a scientific project. That helps when there are tensions elsewhere in the world, that scientists and officials and even ministers can still connect over an endeavour like ours.

You mentioned SKAO’s visibility at high levels – what more can you tell us about that?

Catherine: SKAO is certainly visible at the very highest levels of government and has been for several years, because of the scale of the project, its international nature and its expected large science and socio-economic impact.

Phil: I’ve got several concrete examples in mind actually. For instance, I am the proud owner of a letter from then-UK Prime Minister David Cameron from the time of the bidding process for the HQ. Our French colleagues, who have recently announced their intention to seek membership of SKAO, had to seek such approval in the French prime minister’s office. And President Xi of China has mentioned the SKA and Chinese involvement in the Observatory in national addresses. It’s very gratifying that this visibility translates into strong support.

Looking ahead to this year, it’s going to be another busy one for everyone involved. What do you see as the highlights?

Phil: There will be many exciting steps in 2021. We’re planning the transition of staff from the Organisation to the Observatory to take place in May. That will be critical for the ability of the Observatory to function. The next major milestone we expect is the Council members agreeing to the start of SKA construction. So, the latter half of the year we will focus on going out to tender with contracts for construction activity, followed hopefully towards the end of this year or early next year by a big groundbreaking ceremony.

We’re also expecting more countries to seek membership of SKAO in the coming months and years. What’s in it for them?

Phil: A country that joins SKAO is joining one of the great scientific adventures of the 21st century. It’s science that drives us and that excites the communities in these countries, and of course there are all the side benefits that come with that.

Catherine: Governments of course are interested in fundamental science but also in new technologies and innovations and there is a lot of interest in industrial return on national investments. So, it is about skills and capacity building, technology, innovation, industrial return, knowledge transfer, and spin offs, but fundamentally it is about a wonderful scientific journey that we are now embarking on together.