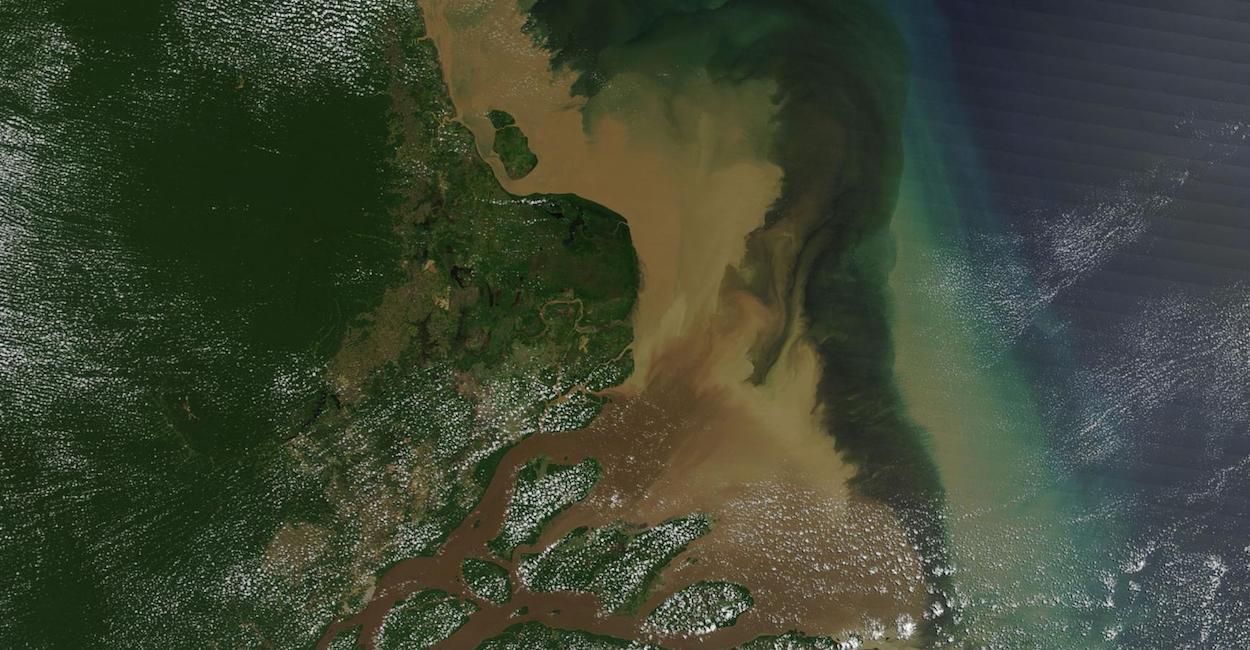 A new numerical model of the tropical Atlantic, integrating for the first time the significant role of tides on the Amazon plume, will provide a better understanding of the river’s impacts on oceanic circulation and on climate.

All sailors know that the effects of the tide should not be underestimated! Inspired by this ancient wisdom, and overcoming arduous mathematical complexities, scientists have developed a new model of the Amazon plume. “Our tool will provide a better understanding of the impact of global change or regional anthropogenic disturbances on the functioning of the Atlantic Ocean and the climate system,” says Fabien Durand, oceanographer-physicist at LEGOS. The discharge of the great river into the Atlantic Ocean contributes to the global climate balance and to the biological and physical mechanisms throughout the Atlantic basin.

The gigantic size of the world’s largest river means that a considerable amount of freshwater is discharged into the Atlantic. With a flow of 200,000 m3 per second, it provides 50% of all river inflows into the Atlantic Ocean and forms a plume that extends up to 3,000 kilometres off its mouth.

This long strip of warm, fresh water, arriving at the surface on the western edge of the ocean basin, becomes part of the ‘ocean conveyor belt’, the system of ocean currents through which heat from the tropics is transported to the poles. Similarly, by warming the surface of the tropical ocean, the plume could contribute to the intensification of tropical cyclones by providing them with energy.

Finally, it fertilizes the western tropical Atlantic, a region that would be particularly unproductive without these nutrient inputs from the continent, and it promotes the dispersion of pollutants from the Amazon basin. Although this has yet to be demonstrated, it could thus participate in the seasonal proliferation of sargasso, which has been invading the Caribbean coasts for several years.

Despite its importance, this plume has not been well represented in numerical modelling until now. As a result, its study, like that of the disturbances it can undergo, remained incomplete.

With winds and tides

“Until now, numerical models of the Amazon plume have only included current and wind action,” the scientist explains. These forcings are certainly important in the region, where there is a sustained northwestward coastal circulation and strong east-west trade winds. But they’re not enough to represent the situation in situ, since these models suggest that the plume is moving northwest along the South American coast, while observations show that it actually flows northward into the open ocean and then, for part of the year, retroflects due east towards the African coast.

Clearly, the tidal component was missing to adequately describe the oceanic mechanisms at work in the plume of the great river. “The ebb and flow due to the gravity of the Moon and the Sun generally helps to mix the river waters from the continent with those from the ocean,” says Julien Jouanno, also an oceanographer and physicist at LEGOS. “In this region, where the tides are of high amplitude due to the geography of the basin, their influence could be significant and we have been working to take them into account them into a new model.”

Different scales for time and space

In fact, once the numerical complexities of associating the fine temporal and spatial scale variations of tides – a few minutes and a few kilometres – with those of the longer currents of the general ocean circulation, winds and interannual ocean variability were resolved, the new model proved to be very efficient. It provides a numerical representation consistent with observations made by satellites, cruises and commercial vessels equipped with instruments for recording ocean conditions in the area.

“This new model could be used to assess the impact on the ocean and the climate of ongoing hydrological changes in the Amazon basin, particularly those associated with the 400 dams on the Amazon that are under construction or planned,” concludes Fabien Durand.