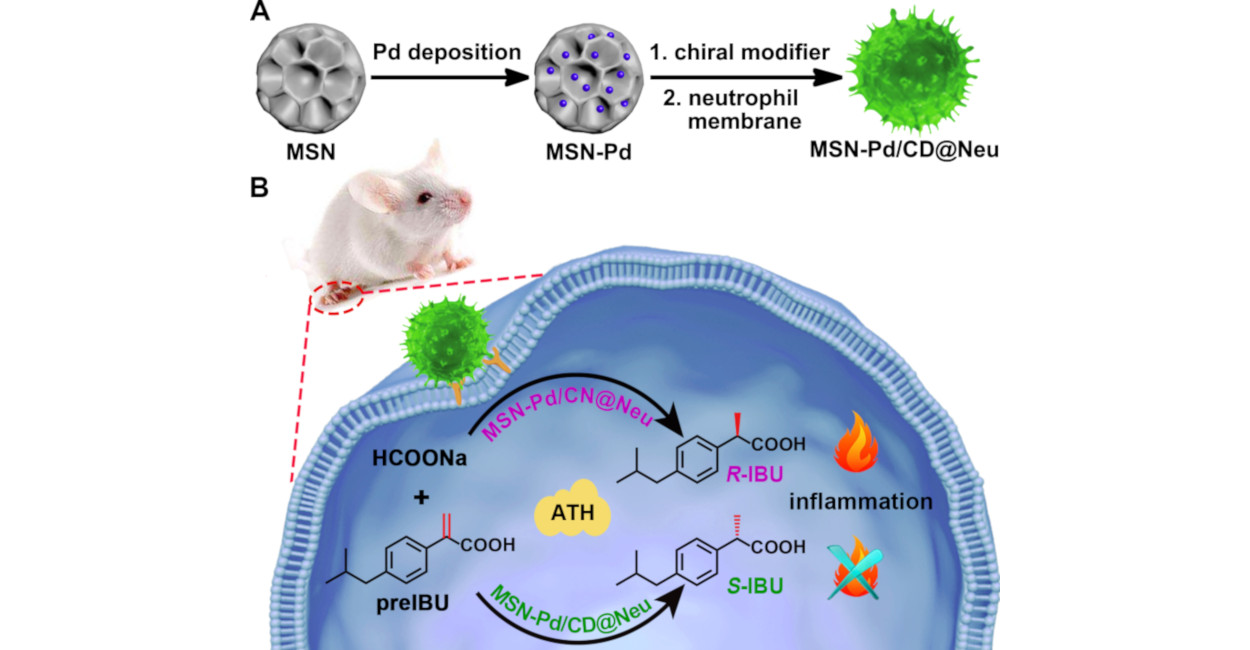 Why not producing drugs directly where it is needed in a living body, and with the right shape?

Enantioselectivity plays an important role in the pharmacological and toxicological processes of chiral drugs.

In chiral drug synthesis that uses bioorthogonal chemistry within complex biological milieu, asymmetric transfer hydrogenation (ATH), which utilizes safe hydrogen donors instead of high pressure H2, has been gaining popularity and has been performed in living cells.

Prof. Qu Xiaogang from the Changchun Institute of Applied Chemistry (CIAC) of the Chinese Academy of Sciences and his colleagues recently presented a novel strategy using a neutrophil-directed ATH reaction to achieve site-selective chiral drug synthesis in living systems.

The study was published in Chem on June 25.

Cinchona alkaloid enantiomers were individually adsorbed on the MSN-Pd catalyst to introduce enantioselectivity.

A neutrophil membrane was subsequently coated onto the MSN-Pd chiral catalysts, creating the MSN-Pd/CD@Neu catalyst, which possessed inflammation-targeting ability inherited from the neutrophils.

The next stage of research involved using MSN-Pd/CD@Neu to catalyze an intracellular conversion involving the precursors of Ibuprofen (IBU).

IBU is a drug well-known for relieving inflammation, fever and pain. The pharmacological activity of IBU is mainly attributed to the S-enantiomer while the R-enantiomer is thought to be potentially harmful. For this reason, it is important to be able to control the catalysis of IBU into its enantiomers.

In this study, the conversion of the precursor molecule of IBU (pre-IBU) to S-IBU was realized by using a targeted ATH bioorthogonal reaction in a mouse paw model, with HCOONa as the hydrogen donor.

Compared with the controls, the MSN-Pd/CD@Neu catalyst simultaneously exhibited inflammation-targeted capability and enantioselectivity as part of its anti-inflammatory action.