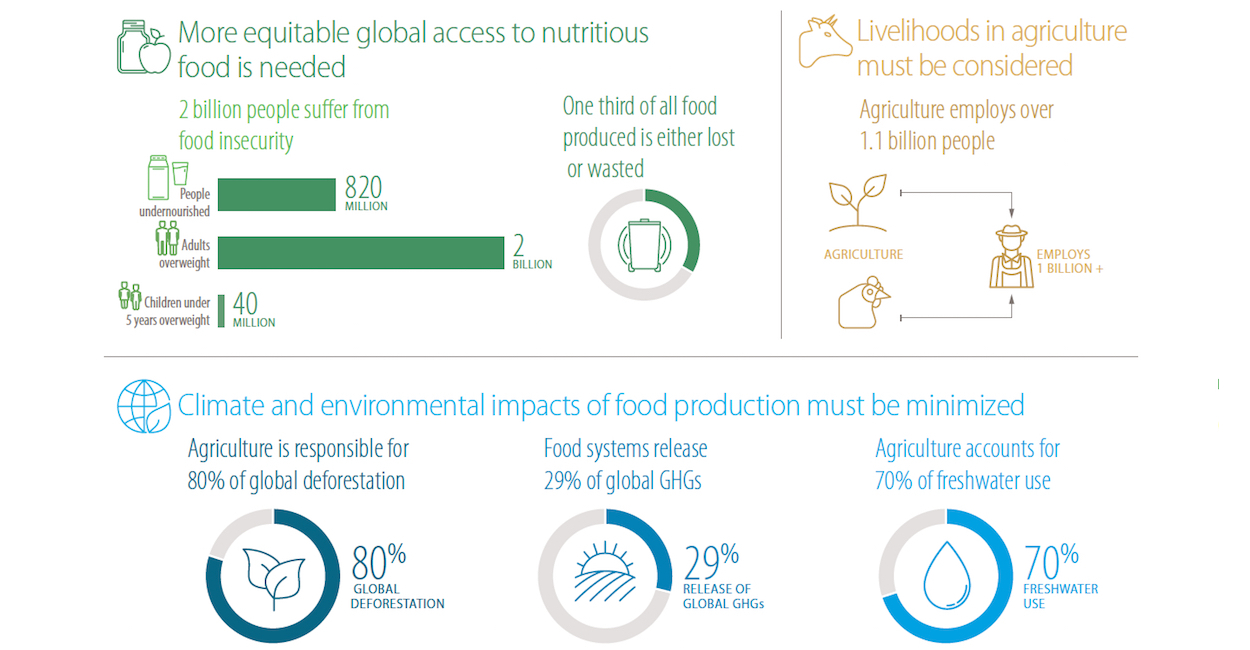 Can we produce enough food, in a sustainable way, at affordable prices? Agriculture is one of the nexus of SDGs.

The third entry point for Sustainable Development in the report The Future is Now is Food systems and nutrition patterns. On this topic, SDGs are particularly interconnected. With the help of the figure that introduces this post, it is rather easy to find quick facts that show how at least 11 of the 17 SDGs have something to do with food and agriculture.

So, what do the authors of the report say about science and technology as a lever to improve food systems and nutrition patterns ?

A smaller impact on environment

First, they propose to decrease the impact of agriculture on the environment. They promote organic farming as a transition possibility, insisting that more research must be done in this field (if we may write so!), to increase yields. Globally, more food production is needed.

A focus on technological development that can lead to maximizing the nutritional value of food produced with respect to environmental impact of production is a prerequisite for developing a sustainable global food system. That includes approaches that can increase production per unit land area, decrease water use and decrease or eliminate the release of both pesticides and reactive nitrogen and phosphorous into the environment. There is evidence that organic farming, which does not rely on the use of artificial fertilizers and pesticides, may be able to make significant contributions to the transition of some food systems. Abstention from the use of artificial fertilizers often leads to reduced yields compared with conventional farming practices. However, studies that compare yields between conventional and organic farming practices indicate that the performance of the two forms of farming is very context specific and that organic farming does not consistently underperform in comparison with conventional practices.

It can also be noted that research on maximizing yield in conventional agriculture has been carried out much longer than in organic farming and other forms of agroecology. Given the much-reduced environmental impacts associated with the later production forms, further research directed towards maximizing yields should be carried out.

In passing, they mention that changing agriculture systems could also help to solve the climate problem. The 4 per 1,000 initiative for instance aims to increase soil organic matter content and carbon sequestration through the implementation of agricultural practices adapted to local environmental, social and economic conditions.