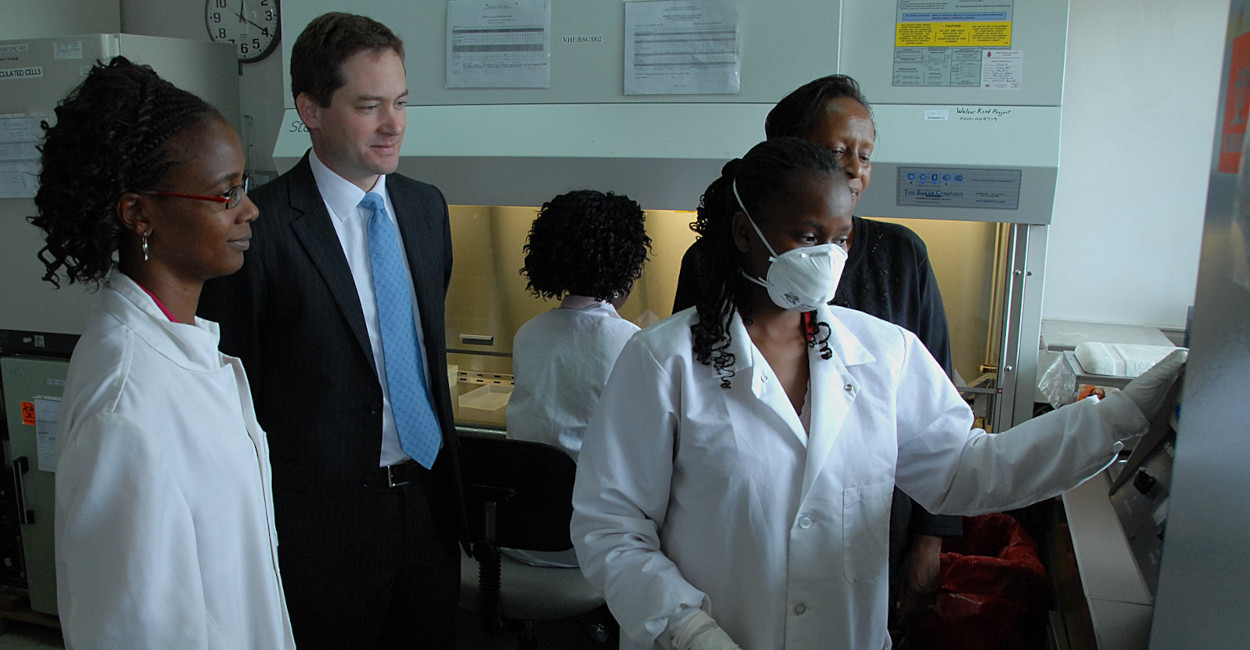 First part of this article

Second part of this article

However, a third of those surveyed said insufficient funding and poor infrastructure were obstacles in achieving that excellence.

Not enough funding by states

Despite African Union member countries committing to spend at least one per cent of their gross domestic product on research and development by 2010, none achieved the goal. In 2019, Africa accounted for just 0.9 per cent of global R&D spending, well behind North America at 27 per cent and Europe at 21 per cent.

Africa will then continue to rely on prosperous research partners from the global North. But Judy Omumbo, senior programme manager at the Kenya-based African Academy of Sciences (AAS), says this support should take the form of long-term, strategic funding that enables Africans to conduct globally competitive research and builds knowledge-based economies on the continent.

“We need funding that goes toward improving the practice of science in the South,” says Ombumbo.

It is a paradigm shift in collaborations the AAS is pushing with its Future Leaders – African Independent Research (FLAIR) Fellowship, a partnership with the Royal Society, supported by the UK’s Global Challenges Research Fund (GCRF).

“FLAIR is unique in the sense that it’s a fellowship that’s lucrative enough for a fellow to carry out independent research while developing research capacity,” says Ombumbo.

Money into the hands of young researchers

FLAIR is open to African early career researchers addressing global challenges faced by developing countries. Its inaugural cohort was announced in 2019, with Sarah Fawcett, an oceanographer and climatologist at UCT among them.

Fawcett praises the fellowship for getting money into the hands of young African researchers “rather than to a northern partner with trickle-down into Africa”. But she suspects tension between the UK funders and Kenya-based AAS.

“The northern hand is still there,” she says. “But the funders are coming in with a big investment and are making an attempt towards empowerment. That’s how we start to change things.”

Fawcett is one of an elite group of researchers under the age of 40 that make up the 2020 World Economic Forum Young Scientists Programme, which also includes Salome Maswime, head of global surgery at the University of Cape Town(UCT), South Africa.

Honoured for her contributions to ocean chemistry and biology in climate change, her work is firmly footed in South Africa. It is an example of local-led development research that is globally competitive.

“The Southern Ocean is the biggest lever we have in terms of the ocean’s response to rising carbon dioxide emissions and we have unfettered access to it from South Africa,” Fawcett says.

Global South to take the lead

For researchers such as Fawcett, BIOGRIP’s impact will be significant. “Not only can we collect our samples from an African research vessel in the middle of the Southern Ocean, but we can measure them in an African laboratory and publish an African-led study that has global implications,” she says.

The technical infrastructure expected from BIOGRIP will also make it possible for the global South to take the lead in international collaborations. But Fawcett says that power shift will only be possible through co-development.

“Framing objectives from the very beginning with all stakeholders at the table, and involving them in continual evaluation is the only way we’ll move closer to true collaboration,” she says.

South Africa is the third most biodiverse country in the world, and gives access to the Atlantic, Indian and Southern Oceans. It’s also the most economically prosperous country in Africa.

According to the 2019 South African Research Enterprise report, South Africa “punches above its weight” in research production, output and international research collaborations.

These advantages come with responsibility, says Salim Abdool Karim, director of the Centre for the AIDS Programme of Research in South Africa (CAPRISA).

Helping to ensure that is the Research Fairness Initiative (RFI). A self-reporting tool for institutions and funders, it helps them identify strengths and weaknesses in research collaboration policy and practice – and to develop them together.

With 36 indicators, it asks bodies to outline their approach to issues such as conflict management, contracts, financial management and intellectual property rights. The report that results can be used to develop and negotiate a strategy for fair partnerships. It’s a thorough and not uncomplicated process.

In fact, RFI has published only four reports since 2018, including one from the WHO’s Special Programme for Training and Research in Tropical Diseases and Senegal’s Université Alioune Diop. CAPRISA’s report has been put on hold as the centre deals with COVID-19.

“RFI needs early adopters who will pull in others. We don’t mind that its full of kinks. In fact, that’s part of how we work together to fix it and find better solutions,” he says. “What’s important is for all of us to work together in getting there, and RFI is helpful in that.”

Foundations for the future

Calling 2021 the Year of Equitable Research Partnerships, RFI is campaigning to recognise fairness in research collaborations and their potential for impact.

“The international research community moves from crisis to crisis,” says Carel IJsselmuiden, director of the Council on Health Research for Development, which set up the RFI. Whether it is malaria, climate change or COVID-19, he says, sustainable partnerships are never on the agenda.

“Let’s make developing partnerships an equal part of collaboration and develop agreements and benchmarks for the future,” he says.

Indeed, global collaboration and cooperation are in disarray, said the The Lancet ahead of the 75th session United Nations General Assembly held in September 2020.

“The need for global cooperation has never been more visible or more crucial,” it added. “But rather than expressing a shared vision for a common future, countries are now undermining global cooperation through rising nationalism, open hostility towards multilateral institutions, and a growing tendency to look after their own interests.”

They are issues that impact the global South the most, and to which those countries also contribute. But Karim, who is also co-chair of South Africa’s COVID-19 advisory committee, sees potential in this crisis.

“You should use every opportunity in a crisis to lay down good foundations for the future,” he says. “With COVID-19, I think things are changing for the better.”

This article is the third part, out of three, of an article published by SciDev.net that we publish along three weeks.