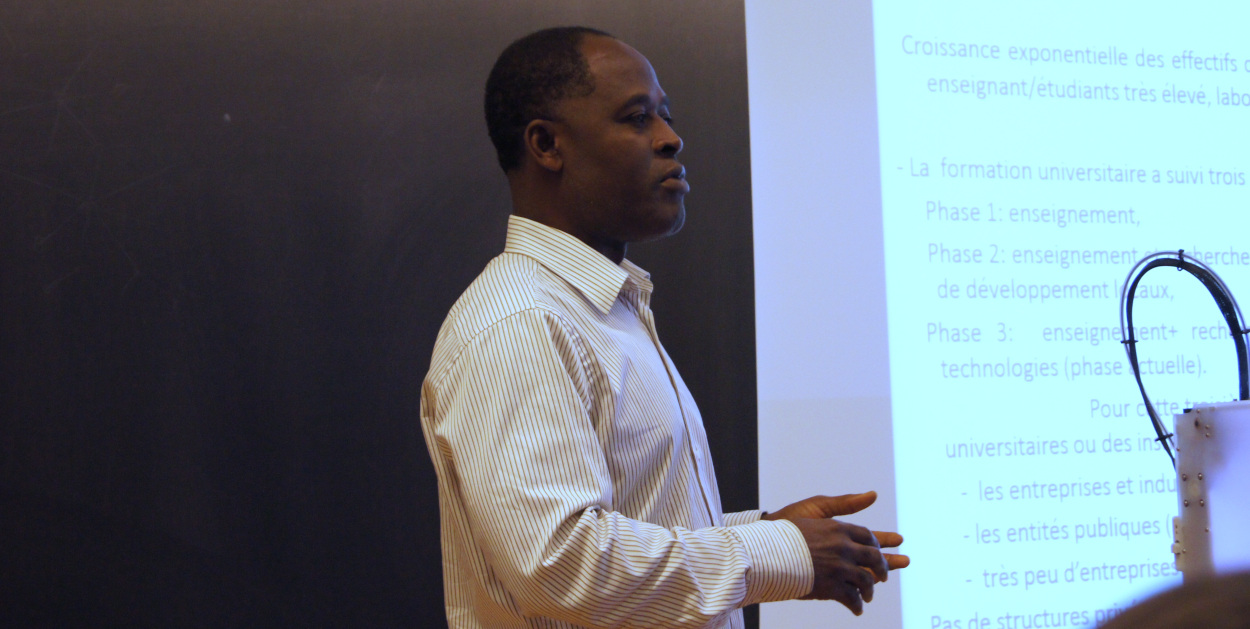 Paul Woafo, professor at the University of Yaounde 1, receives the 2020 IUPAP Medal for Outstanding Contributions to the Enhancement of Physics in Developing Countries.

For his many exceptional contributions to the development of physics in Cameroon and the African continent, including founding the Cameroon Physical Society, co-organizing several research collaborations between Cameroon and other countries, founding the Sci-Tech Service to facilitate research on topics of local development, and organizing a series of international conferences on applications of physics to real life problems in developing countries.

Paul Woafo was born on January 12, 1965, and is currently Professor of Physics and Director of the Laboratory of Modelling and Simulation in Engineering, Biomimetics and Prototypes at the University of Yaoundé I in Cameroon. All his school education took place in Cameroon, from the primary to the doctorate level. He defended his Doctorat de spécialité (3e cycle) in 1992 and his Doctorat d’Etat in 1997.

The dynamics of topological solitons

The excellence of his work was reflected in a large number of articles in prominent physics journals, including J. Physics: Condensed Matter of IOP-UK, Physical Review B of APS, Solid State Communications, and J. Physics and Chemistry of Solids. The main topic of his research for his two doctorates was the dynamics of short topological solitons in diverse materials, including ferroelectric materials, hydrogen-bonded materials, surface physics and biological systems.

After his recruitment as Lecturer at the University of Yaoundé in 1992, his hard work led to his promotion through the academic ranks, culminating in his appointment to the rank of full Professor in 2005.

A leading influence in Cameroonian physics

Woafo is one of the leading influences behind many Cameroonian physicists. He has successfully supervised 53 Ph.D. theses and a large number of Masters theses. This is indicative of the positive character of a class of scientists who always manage to facilitate work by younger researchers. This supervisory dimension of Woafo’s work has spread to Benin, the Central African Republic, and outside of Africa.

Most of his former Ph.D. students are respected physicists working in Cameroon and abroad, and many are full professors and directors of research, having benefited tremendously from the scientific opportunities offered by their Ph.D. supervisor.

Woafo presently manages a research group conducting both fundamental and applied research with a strong emphasis on modeling, numerical simulations, experimental investigations, and realization of prototypes of devices for industrial, domestic and health uses.

Woafo is the author of approximately 250 articles in international refereed journals in various fields of fundamental and applied physics. Due to his intensive and extensive scientific contributions, Woafo has played a major role in a number of scientific organizations and has received many special distinctions and prizes.

Besides his student mentoring and supervisory activities, Woafo has fostered special teaching topics that have had a strong impact on the development of physics research in Cameroon and the broader region. Especially significant are his engagements in training Masters and Ph.D. students on how to successfully conduct numerical simulations, experimental work, and recently, simulations through embedded technologies.

Most present and former Ph.D. students have benefited from the collaborations established by Woafo with colleagues in other countries in Africa (Benin, Nigeria, and South Africa), Europe (Belgium, France, Germany, Italy, Norway, and Spain), the Americas (Brazil, Canada, and United States) and Asia (India). These benefits have been through Ph.D. supervision, research visits, and postdoctoral appointments.

All these research activities have helped Woafo to be admitted to prestigious institutions, such as the Abdus Salam International Centre for Theoretical Physics, where he was awarded the position of Associate Member (junior, regular and senior ranks), and the Alexander von Humboldt Foundation in Germany, where Woafo was accepted as a Humboldtian in 2007. This has also given him the opportunity to collaborate on research with colleagues in a number of countries, and to be elected a member of IUPAP’s C3 Commission on Statistical Physics.

Woafo’s generosity in sharing scientific knowledge has been extended to the Cameroon community of physicists through his strong involvement in the creation and management of the Cameroon Physical Society. In 2006, with six other physicists, Woafo initiated the creation of the Society, which was finally legalized by the Cameroon government in 2007. During its initial years from 2006 to 2013, Woafo headed the Society, which now counts more than 150 members.

While managing the Society, Woafo engaged Cameroonian physicists in organising the first national conference in 2007 to improve the situation of physics in Cameroon. He then instituted a biennial International Conference on Low-Cost High-Level Physics and Solutions to Real Life Problems in Developing Countries. The main focus of this conference is to present results and initiate research activities on high-level topics that can be addressed using theory, experiments, and applications in countries with limited resources, and that can produce results that are publishable in excellent physics journals and/or have an impact on the technological, economic and social development in developing countries.

This conference, which has been the only permanent meeting for physicists in Cameroon, has attracted physicists from different parts of the world, including Africa, the Americas and Europe. The sixth edition of this International Conference took place in November 2019.

Parallel to the Cameroon Physical Society, Woafo initiated the creation of three Cameroonian Student Chapters related, respectively, to the Society for Photonics and Instrumentation Engineers (SPIE), the Optical Society of America (OSA), and the Institute of Electronic and Electrical Engineers-Photonics Society (IEEE). Through these chapters, Woafo has organized special training to empower graduate students and postdocs, not only in the main field of optics and applications, but also in embedded technologies, numerical simulations and career development.

As the Cameroon focal point of the International Year of Light (IYL) in 2015, Woafo, together with Professor Yanne Chembo Kouomou, organized a workshop on research in optoelectronics, optomechanics, optical materials, nonlinear optics, optical telecommunications, and solar cells. The workshop was attended by some 100 participants from Africa, Europe, and Oceania.

In other work, Woafo organized a meeting in 2017 entitled, Women in Photonics, to which more than 25 junior women physicists came from different Cameroonian universities gathered to discuss issues related to photonics education and research and the difficulties faced by women engaged in hard science studies.

Highly sensitive to the lack of experimental training in secondary schools and universities, in 2013, Woafo created a private scientific center called Sci-Tech Services to promote experimental science, reinforce the capacities of scientists in several fields, and conduct technological research activities. This center has provided several practical trainings for students, support to universities, support to the organization of specialized training for Masters and Ph.D. students, and opened its doors to young scientists eager to conduct experimental parts of their training and research activities.

Due to the lack of scientific equipment in most of Cameroon’s universities and high schools, Woafo became the local organizer of Challenge for Experimental Physics in Africa. This competition is supported by the French Association pour la Promotion Scientifique de l’Afrique, Cameroon Physical Society, Cameroon Academy of Sciences, French Physical Society, and European Physical Society.

The first edition culminated on December 8, 2017, with the awards presentation to four appropriate and inexpensive experimental instruments: a didactic bench for electricity and electronic experiments, physics lab incorporating the use of cell phone screens as oscilloscopes, special signal generator, and solar tracker. The second edition took place in 2019 and led to new instruments fabricated locally by young Africans: a smart farm that uses an embedded technology device to monitor and command the environmental parameters in a poultry farm through cell phones or computers, a didactic bench for experimental training in geometrical optics, didactic bench for experimental training on combinatory and sequential electronics, and an instrument for environmental monitoring of particles, dangerous gases, and gamma radiation.

At the continental level, Woafo was one the founders of the African Physical Society in Dakar in 2010 and was elected as one of its Vice-Presidents. In science policy, Woafo has acted in several roles at the Ministry of Higher Education, Ministry of Research and Scientific Innovation, and Cameroon Academy of Sciences. Finally, Paul Woafo is often interviewed in newspapers, radio, television, and conferences on ways to optimally organize scientific activities in Cameroon and in the rest of Africa.

This post has first been pubished by IUPAP Newsletter.