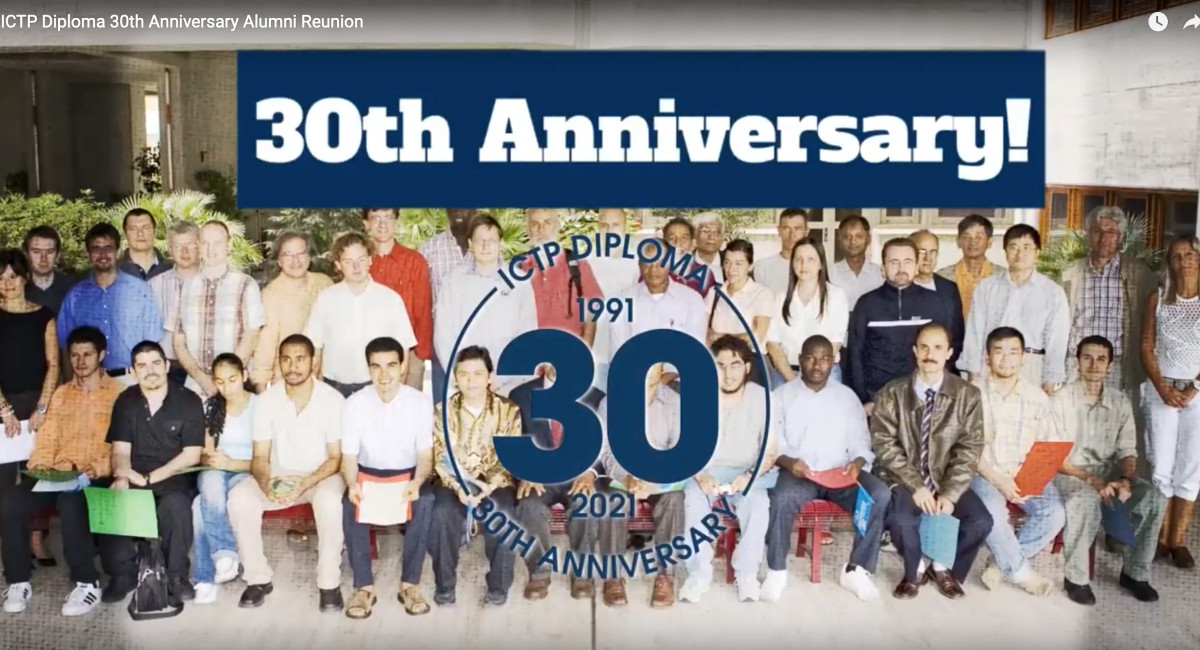 Kelsey Calhoun, writes on how the physics career of Surujhdeo Seunarine, a Professor at University of Wisconsin, in River Falls, USA, was launched by the ICTP Postgraduate Diploma Programme.

Often, the ICTP Postgraduate Diploma Programme can have a big impact on a scientist’s whole career and life. A member of the very first class of Diploma students thirty years ago, Surujhdeo Seunarine, can attest to this.

In a chat with ICTP’s Kesley Kalhoun, he narrates: “The ICTP Postgraduate Diploma Programme was the thing that got me started as a physicist. I was interested in particle physics in Trinidad and Tobago, when it was impossible to articulate to anyone what that was except to one professor, Frederick Campayne, who encouraged me to find a way to pursue it”.

Seunarine said: “It was really unaffordable to even apply to PhD programmes. One day I just saw this poster from ICTP, and I applied to the Diploma Programme without knowing anything about it.”

“Some months later my grandad got a telegram saying I got in,” Seunarine smiles as he remembers, adding that: “I went from not knowing how to take the next step and not being able to afford to apply to graduate programmes, to being taught by great professors and meeting Abdus Salam. I’m thankful to my parents who encouraged me to travel to Italy even though they were uncertain of what it was I was trying to pursue.”

“The first day of courses I remember thinking, this is going to be quite a challenge,” Seunarine says. But the professors and scientists leading the classes for this new programme wanted to make sure they filled in any holes in the students’ backgrounds.

“All of a sudden, we had a refresher course in relativistic quantum mechanics,” Seunarine remembers. “Right away it told us that our instructors were paying attention, and could shift gears so that none of us were left behind.”

‘ICTP did it for me’

After finishing that intense year and graduating from the Diploma Programme in 1992, Seunarine went back to Trinidad and Tobago. He returned to ICTP soon after for a summer school in 1993, when Professor Faheem Hussain introduced him to a professor at the University of Kansas in the US, Douglas McKay, who later became Seunarine’s doctoral advisor.

“ICTP did it for me again,” Seunarine says, “introducing me to my graduate school advisor. It is likely I would be still in Trinidad, and probably not doing particle physics or even physics at all, if it were not for ICTP.”

Today, Seunarine is Professor and Chair of the Physics Department at the University of Wisconsin, River Falls, USA. In between the Diploma Programme in Italy and his current position, Seunarine’s career has taken him to the University of Kansas for his PhD, to New Zealand for postdoctoral work, and to Barbados as a lecturer.

It’s even taken him into experimental physics from his theoretical physics roots: he now works on two astrophysics experiments, one that observes neutrinos, IceCube, and one that observes neutrons, CosRay, both located at the South Pole. Seuarine’s interest in astrophysical neutrino physics and phenomenology started during graduate school and grew such that he is now a member  of IceCube a large international collaboration of over 300 scientists at 50 institutions, that operate the IceCube Neutrino Observatory.

Between theorist and experimentalist

“Now, I’m something in between a theorist and an experimentalist. My colleagues here accuse me of  being a theorist,” Seunarine laughs, “but I’m somewhere in between, still a theorist but leaning towards experiments.”

Seunarine’s research, theoretical and experimental, would have been hard to pursue had he returned to work in the Caribbean. “Interest in theoretical physics, astrophysics and cosmology is not very strong in the Eastern Carribbean,” explains Seunarine.

“Every time I used to go back to Trinidad, I would give a presentation at the university, and the interest is mixed, sometimes the room would be  full, sometimes only two students. Recently I gave a presentation to the Astro Club of Trinidad and Tobago, mostly high school students.”

Seunarine explains that he does these presentations to let students know, that if they’re interested in this type of physics and no one else is, there are still ways they can pursue it. “It’s important to expose a larger number of students broadly to the field of particle physics, and it will have a significant impact on a small number of students who will be inspired to pursue it.”

Mirroring those of Abdus Salam, Seunarine’s efforts to make it easier for more students to get into physics are both local and global. “Even in the US, there are still a number of students who are being left behind,” says Seunarine. This is why his group hosts students every summer through  the National Science Foundation undergraduate research programme, REU.

“The students are recruited from all over the country, and the goal in the group is also to recruit people from backgrounds and identities underrepresented in physics.” Thinking about his own experience at ICTP, Seunarine is grateful. “I’ve never had an opportunity to say thanks to everyone,” he says.

“I don’t think the people there know how impactful the experience is for the Diploma students. I was inspired knowing our professors were top of their field and they were teaching us, I appreciated all of them and everyone there.”

This report was first shared by ICTP.