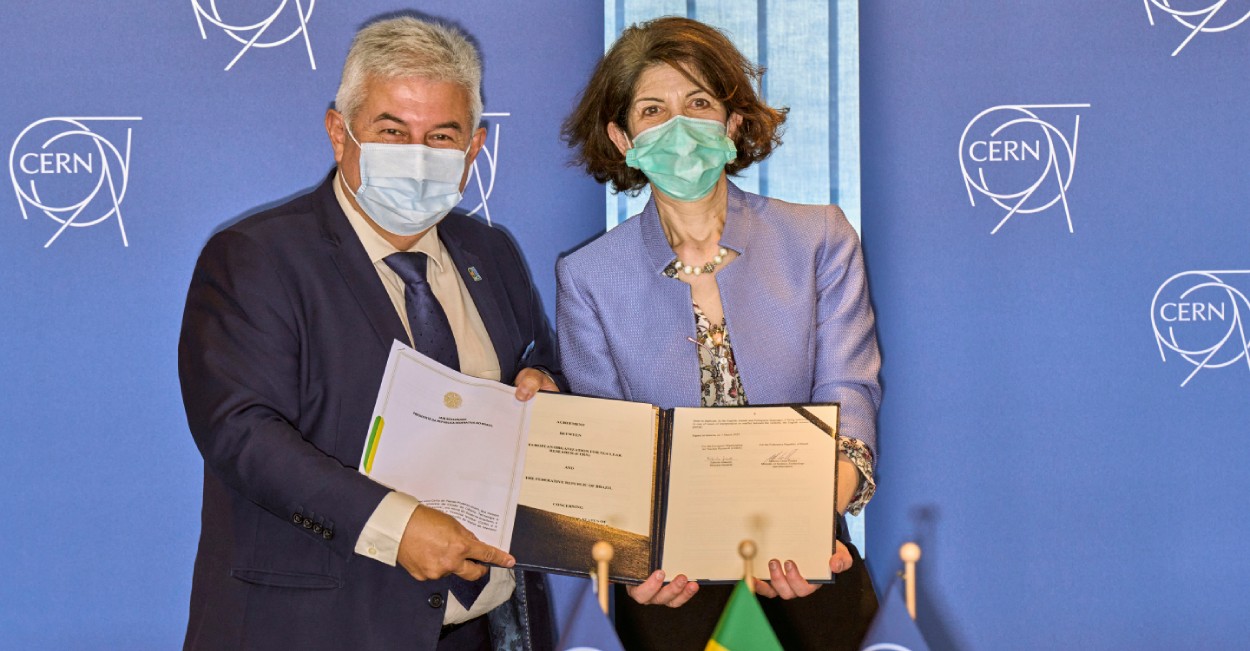 The Associate Membership will enter into force once Brazil has completed all necessary accession and ratification processes. Brazil will be the first country in Latin America to join CERN as an Associate Member State.

“We are very pleased to welcome Brazil as an Associate Member State. Over the past three decades, Brazilian scientists have contributed substantially to many CERN projects. This agreement enables Brazil and CERN to further strengthen our collaboration, opening up a broad range of new and mutually beneficial opportunities in fundamental research, technological developments and innovation, and education and training activities,” said Fabiola Gianotti, CERN Director-General.

“The accession of Brazil to CERN Associate Membership creates a robust framework for collaboration in research, technology development and innovation. The Brazilian scientific community has collaborated with CERN since its creation. Being an Associate Member State will foster novel opportunities for our scientists and engineers to participate in activities developed at CERN.

“Our industry will benefit as well through the participation in contract bids for both R&D and the supply of services and materials. I am certain that this partnership will take the Brazilian science, technology and innovation sector to a whole new level of development,” said Marcos Pontes, Brazilian Minister for Science, Technology and Innovation.

Cooperation between CERN and Brazil

Formal cooperation between CERN and Brazil started in 1990 with the signature of an International Cooperation Agreement, allowing Brazilian researchers to participate in the DELPHI experiment at the Large Electron–Positron Collider (LEP). Today, Brazilian institutes participate in all the main experiments at the Large Hadron Collider (LHC): ALICE, ATLAS, CMS and LHCb.

They are also involved in several other experiments and R&D programmes, such as ALPHA, ProtoDUNE at the Neutrino Platform, ISOLDE, Medipix and RD51. Brazilian nationals also participate very actively in CERN training and outreach programmes, including the Summer Student programme, the Portuguese-Language Teacher programme and the Beamline for Schools competition.

Over the past decade, Brazil’s experimental particle-physics community has doubled in size. At the four main LHC experiments alone, more than 180 Brazilian scientists, engineers and students collaborate in fields ranging from hardware and data processing to physics analysis. Beyond particle physics, CERN and Brazil’s National Centre for Research in Energy and Materials (CNPEM) have also been formally cooperating since December 2020 on accelerator technology R&D and its applications.

As an Associate Member State, Brazil will attend meetings of the CERN Council and the Finance Committee. Brazilian nationals will be eligible for limited-duration staff positions, fellowships and studentships. Brazilian companies will be able to bid for CERN contracts, increasing opportunities for industrial collaboration in advanced technologies.

This report was first published by CERN.