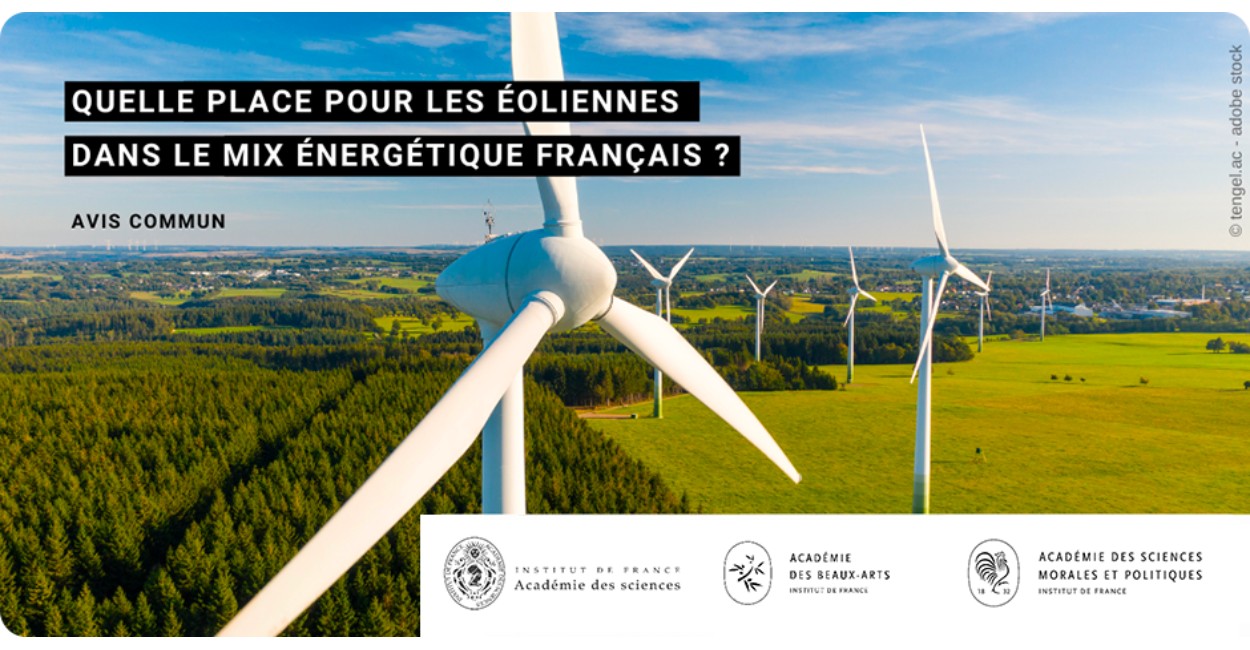 France produces 92% carbon-free electricity. However, this production is insufficient as soon as winter temperatures are low says Institut de France, which also questioned the place of wind turbines in French electricity mix.

The climate emergency requires rapidly replacing the use of fossil fuels, which are high emitters of greenhouse gases, by other means of energy production. Even in a context of energy sobriety, the decarbonization of transport and heat production will require giving a much greater place to low-carbon electricity in total energy consumption.

Thus, the objective of carbon neutrality set for 2050 imposes the use of renewable energy sources and nuclear power in proportions that should be defined without ideological preconceptions but in perfect coherence with the energy context of each country, its industrial strategies and its geographical, economic, social and ecological constraints.

The current questioning of the place of wind turbines in the French electricity mix has led the Academies of Sciences, Fine Arts and Moral and Political Sciences of the Institut de France to combine their assessments with the aim of establishing a state of locations and make recommendations.

France produces 92% carbon-free electricity, provided mainly by nuclear (71%), hydroelectricity (11%) and, to a lesser extent, by wind (6%) and photovoltaic (2%). This national production is insufficient as soon as the winter temperatures are low and, without wind, France can then only meet its needs by importing electricity from fossil sources.

The production of wind and photovoltaic electricity is characterized by intermittency which, in the current state of electricity storage capacities, prevents us from freeing ourselves from fossil fuels. The latter, when they are imported, weigh on the country’s trade balance and increase its energy dependence.

The installation of onshore and coastal wind turbines is coming up against increasing resistance because of the nuisances they cause: noise, denaturation and disfiguration of landscapes, loss of heritage value of real estate or tourist attraction of the regions. concerned. Wind turbines must be installed in territories where the wind is on average strong enough to be efficient and constant enough to be usable.

This leads to building them in large numbers and concentrating them in certain regions, independently of local energy needs, thus accentuating a feeling of territorial injustice.

—-> READ MORE OF THE JOINT NOTICE