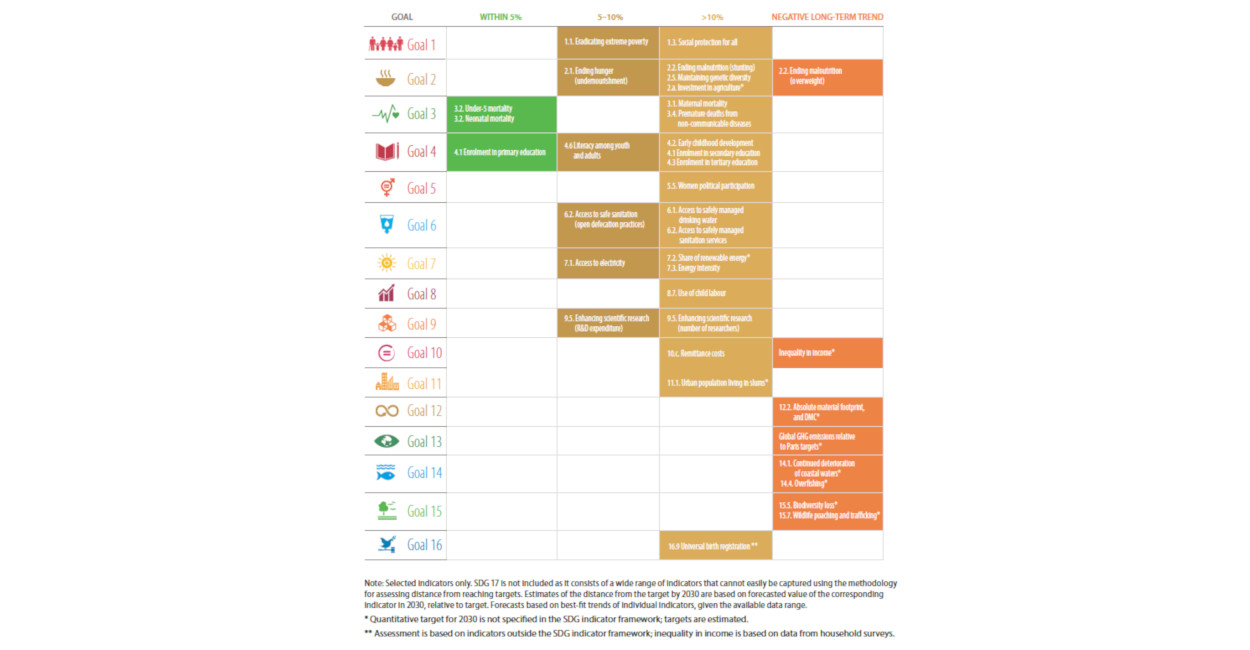 If we want to reach the 17 SDGs in 2030, as the UN General Assembly decided in 2015, we must know where we are regarding to the goals, and to the detailed targets, and on which trajectories we are. The report The future is now, published in september 2019 gives an evaluation. In some fields, it may be OK. But in others, current trends are bringing us backward. Read what the report says, with the help of the figure above (Table 1-1).

“A straightforward read suggests that, at current rates of progress, several of the objectives of the 2030 Agenda should be attainable by 2030 – those depicted in table 1-1 as being within 5 per cent of the target –, including reducing child mortality and full enrolment in primary school. Other goals may also be reached with some additional effort – those depicted as being within 5 to 10 per cent of the target –, such as eradicating extreme poverty, ending hunger, ensuring universal access to electricity, eliminating open defecation, literacy among youth and adults, and desirable levels of expenditure on scientific R&D.

A second group of targets are those where trends in the selected indicators are in the desired direction, but progress is too slow to meet the target. In table 1-1, for example, maternal mortality rates continue to fall, but progress is only at half the rate needed to achieve the target. The situation is similar for child malnutrition, access to safe drinking water and sanitation services, the share of renewables in the energy mix, early childhood development and enrolment in post-primary education. Other targets in that category include some of the necessary conditions for ending deprivations and reducing inequalities. For instance, the percentage of the population covered by social protection or birth registration is improving, but the rates of progress are clearly insufficient to meet the target of universal coverage.

Most worrisome, though, are the targets for which recent trends are not even in the right direction, either because implementation of the Goals has not yet been able to reverse pre-existing deterioration, or because world recovery from the 2008 economic crisis has brought back negative trends that had for the moment been stalled, such as obesity, inequality, greenhouse gas emissions, land degradation, biodiversity loss, wildlife trafficking, absolute material footprints, overfishing and deterioration of coastal waters. Several of those targets, for which even the direction of the trend is wrong, are of particular importance. Not only do they represent trends that are difficult to change, but they also make it harder to reach other Goals and targets, sometimes in ways that cascade across the entire 2030 Agenda.

Four trends, in particular, fall into that category: rising inequalities, climate change, biodiversity loss, and the increasing amount of waste from human activity that are overwhelming processing capacities. Critically, recent analysis suggests that some trends presage a move towards the crossing of negative tipping points, which would lead to dramatic changes in the conditions of the Earth system, in ways that are irreversible on time scales meaningful for society.”