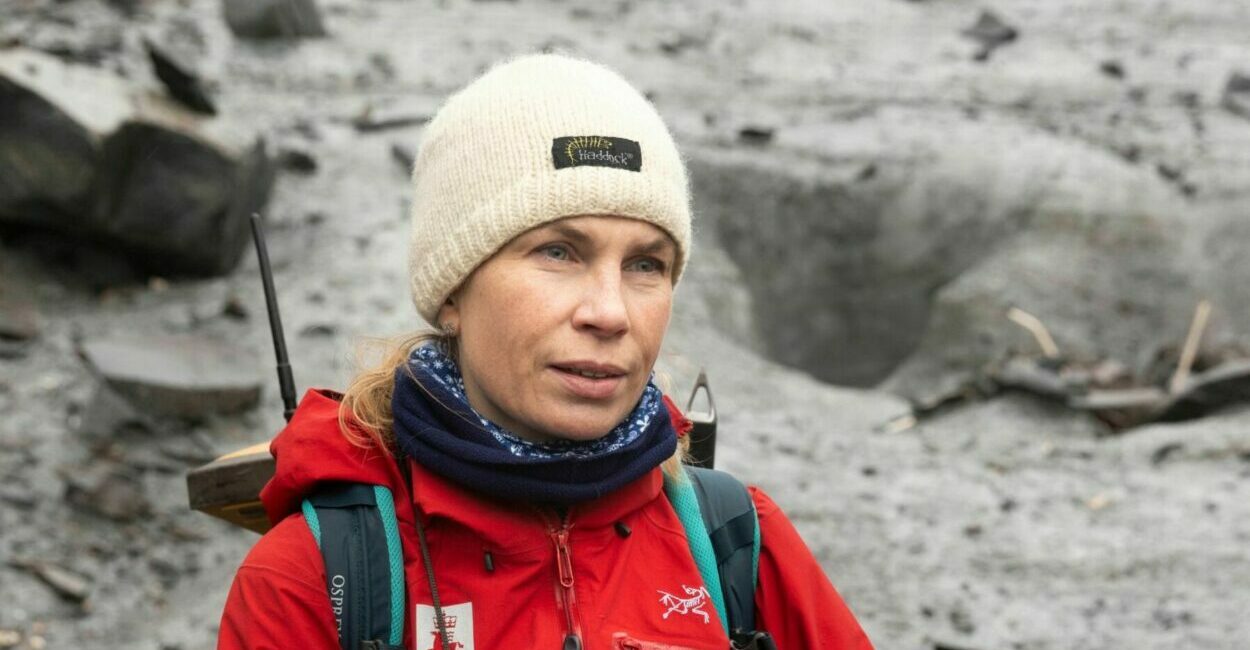 In her new role as President, International Association of Cryospheric Sciences (IACS), Liss Marie Andreassen, hopes to work with IUGG to reduce our carbon footprint and advance cryospheric sciences.

I grew up in Fredrikstad, Norway, 90 km southeast of Oslo, near the coastline close to the Swedish border. I liked skiing and every winter we had winter holidays in the Norwegian mountains, as skiing opportunities were rare around my hometown. I was an eager reader, using my doll’s pram to take my books for a stroll. Every summer we visited Denmark where my father comes from. My first direct meeting with a glacier was not until I was 20 years old, hiking over a glacier on the way to Norway’s highest peak, Galdhøpiggen.

At that time, I had started studies at the University of Oslo, initially planning for a degree in chemistry. After taking introductory classes in geophysics, however, I changed my mind, aiming for a degree in hydrology instead. I also took classes in geomatics and physical geography. During my studies, we went on several excursions and fieldwork courses to glaciers in mainland Norway and Svalbard. I got the chance to do a master’s project in glacier hydrology, studying water flow through a glacier using dye tracing, discharge and ice thickness measurements combined with modelling in geographic information systems (GIS).

It was a perfect choice combining my background in hydrology, glaciology and geomatics. I spent a total of seven weeks doing fieldwork on Midtdalsbreen, an outlet of Hardangerjøkulen, Norway’s sixth largest icecap. I was involved in many activities at the university: teaching, course activities and the geography student association, and it was hard to see myself somewhere else.

But two weeks before my master’s exam I found it timely to investigate job options and called the section for Glaciers, Ice and Snow at the Norwegian Water Resources and Energy Directorate (NVE), with whom I already had contact with – loaning equipment for my field work and receiving advice for my analyses. I was lucky and was granted a 6-month temporary engagement to start with, which after a few years was turned into a permanent position. I started off with database management, digitising glaciers maps and conducting GIS analyses.

I also wrote reports and my first two peer-reviewed papers. I joined the team undertaking glacier mass balance fieldwork and spent many days in the field. I also worked on several snow and remote sensing projects. After a few years I was asked to lead the glacier monitoring programme for Jotunheimen, including the long-term mass balance programmes of Storbreen (since 1949), Hellstugubreen and Gråsubreen (since 1962). Jotunheimen is the highest elevated area in Norway with many smaller valley and mountain glaciers.

I was thrilled to get this responsibility in such a beautiful area.
After a few years and having two kids, my then boss encouraged me to follow up my research by taking a PhD as part of my NVE work. At that time the University of Utrecht, Netherlands, had erected automatic weather stations on Midtdalsbreen and Storbreen. I did my PhD on glacier changes, surface energy balance and mass balance modelling, supervised by Hans Oerlemans.

I defended my PhD in 2008 at the University of Oslo. I have continued my work maintaining the NVE mass balance programme with fieldwork and analyses. My research also includes glacier changes using surface elevation surveys, aerial and satellite images both for detailed studies of individual glaciers and national inventories. Collecting as much data as possible to document the past and present changes of Norwegian glaciers is key to my work. Glaciers are landscape elements that are constantly changing. I find them very fascinating.

Although my work has been geographically restricted to glaciers in Norway, I have enjoyed international cooperation with many good colleagues and through international organisations such as IACS and the International Glaciological Society. My first IACS and IUGG related assembly was the MOCA-09 IAMAS/IAPSO/IACS Joint Assembly in Montreal 2009, where I convened a session. This turned out to be a great experience and a successful meeting. In 2011, I joined the newly established Advisory Board for the Global Terrestrial Network for Glaciers (GTN-G), which is chaired by IACS.

I am honoured and humbled to take over this responsibility from Regine Hock. I am blessed to work with such a skilled and efficient team in the IACS Bureau, with Richard Essery being a great support as Secretary General and Charles Fierz and Andrew Mackintosh with institutional memory as previous President and previous Secretary General respectively. We now have 15 members in the IACS Bureau, including three deputies; and have a good gender and age balance and wide geographical spread.

I hope we can work efficiently together on our goal to reduce our carbon footprint while supporting the advancement of cryospheric sciences.