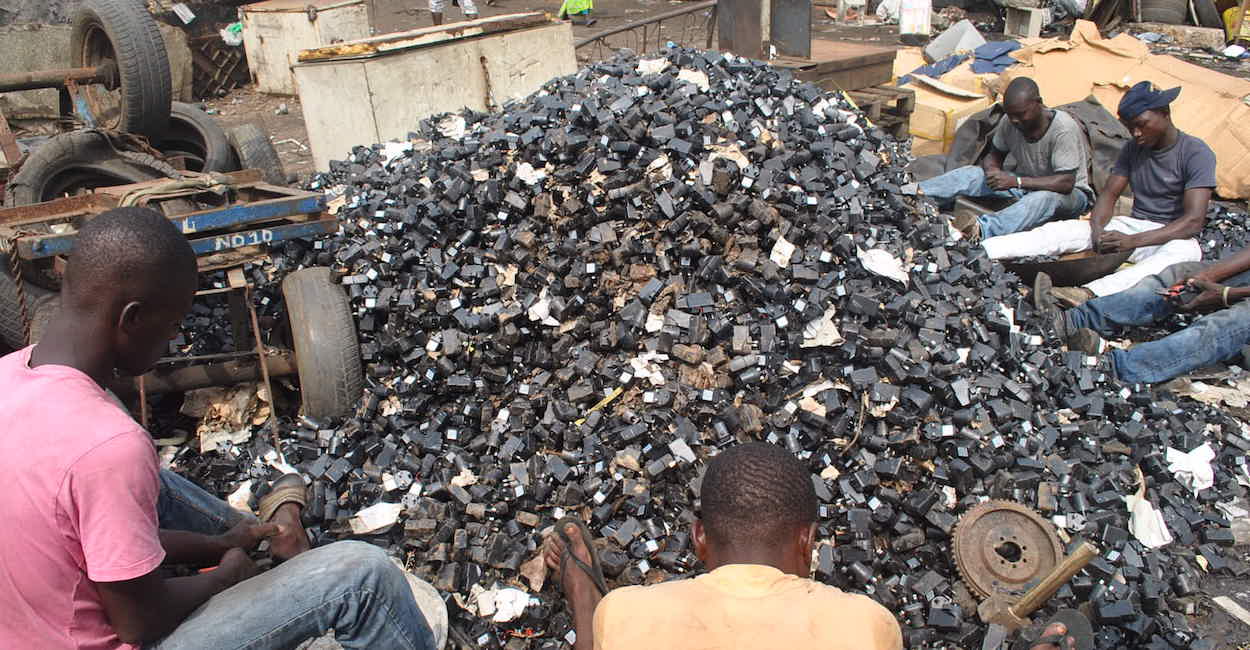 In Ghana, a huge amount of electronic waste is imported from the Global North. It is pollution, but it also can be used as a ressource for new devices.

Three poultry farmers in northern Ghana have found a new way to keep their eggs warm — by keeping them in a fridge.

A prototype incubator uses a repurposed fridge as a casing, while a mechanism inside turns the eggs when needed. The idea comes from a local company called Appcyclers, which developed the prototype when a team member complained about the scarcity and price of commercial incubators.

The prototype is just one way that innovators are making use of growing piles of hazardous electronic waste (e-waste).

“The long goal is actually to promote a greener, safer recycling environment in the Northern Region and in Ghana as a whole,” says engineering graduate Agudor Agabas, co-founder of Appcyclers.

He is part of a generation that is learning to ‘upcycle’ e-waste to further its business ambitions and reduce environmental degradation.

Waste from the Global North

E-waste has a poor reputation in Ghana. The Agbogbloshie waste site and neighbouring settlement Old Fadama — known locally as ‘Sodom and Gomorrah’ — near Ghana’s capital, Accra, has become a symbol of the global North’s wasteful electronics consumption.

Though official estimates vary, one 2017 study estimates about 215,000 metric tons of e-waste arrives in Ghana each year, a weight equivalent to more than 20 Eiffel Towers.

A new generation of e-waste

The site is expected to receive a new generation of e-waste as the global North develops new appliances to shift to a low-carbon economy.

Renewable energy associations note that solar panels installed in the early-2000s solar energy boom are now reaching the end of their 25- to 30-year lifespan. They estimate that by the 2050s up to six million metric tons of old solar panels will be thrown away annually. Global e-waste streams by that time will have doubled to 111 million metric tons per year.

A recent policy review paper noted that both Germany and the United Kingdom’s attempts to decarbonise their heating supply would most likely lead to further waste being generated.

Benjamin Sovacool, of the University of Sussex’s Science Policy Research Unit, describes how the developed world’s attempt to reduce its carbon footprint has led to environmental and public health risks, gender discrimination, child labour, and ethnic discrimination in the global South.

Sovacool calls this the ‘decarbonisation divide’ in a recently-published paper.

More pollutants in food and bodies

The effects of this divide are well documented. Last year, the waste export watchdog Basel Action Network revealed that a single egg sold at the Agbogbloshie camp was 220 times over the European Food Safety Authority’s acceptable level of chlorinated dioxins.

Women living at Agbogbloshie have higher blood levels of the toxic chemical PCB than the site’s scrap workers, and suffer high rates of endocrine disruption and pregnancy complications.

As part of his research into this decarbonisation divide Sovacool visited Agbogbloshie 20 times, where he encountered children as young as six collecting scrap without any protective equipment. “They’re doing it to endow us with the resources that we need to breathe clean air or stop emissions here in Europe,” he says.

From trash to treasure

However, in recent years, Agbogbloshie’s estimated €100 million annual e-waste business has been diversifying. Electronics can now be repaired and refurbished in a flourishing informal services market in outer Accra, often for a fraction of the price that official repair services charge.

Ebenezer Amankwaa, an urban geographer at the University of Ghana, explains these businesses are set up at ‘intermediary sites’ in Accra where e-waste workers can find customers beyond Agbogbloshie’s scrap dealers.

“These intermediary sites, for me, have become the game-changer,” he says.

He explains that years ago, wishing to emulate their successful Nigerian counterparts, Ghanaians at the site began to finely dismantle computer components to source more valuable parts, which they could then sell on to scrap dealers at a higher price.

Some now specialise in repairing certain electronics, often requesting components from dismantlers at Agbogbloshie. Some collaborate on projects with refurbishers in the formal sector. Apprenticeships pass repair skills on to new generations.

Other regions in Ghana are also capitalising on the e-waste economy. Alongside incubators, Appcyclers is developing an e-commerce platform to help others buy and sell second-hand electronic devices.

An eco-tax for imported waste

Initiatives throughout Ghana are trying to improve this upcycling value chain.

A law signed in 2016 requires producers and importers in Ghana to pay an eco-tax before importing new or waste electronics. Charges range from 15 US cents to US$15, depending on the product type. This will fund an e-waste management programme, which is expected to support e-waste treatment plants, training and education.

HOPin academy, an education charity which provided seed investment to Appcyclers, organised an e-waste ‘makerthon’ last year, while the Agbogbloshie Makerspace Platform provides a mobile workstation for entrepreneurs at the site.

Furthermore, the German Corporation for International Cooperation (GIZ) has set up a project to create new centres and training courses for e-waste recycling and disposal methods for recyclers and scrap collectors.

Alongside the environmental benefits, Markus Spitzbart, who coordinates the project, sees this training as helping to sustain the new upcycling economy.

He gives the example of neodymium magnets found in hard drives, which are extremely valuable but may not be spotted in a facility that simply recycles steel.

“It is crucial to link highly educated entrepreneurs — the guys who have the ideas — with the scrap workers on the ground, because they have the materials in their hands,” he says.

Spitzbart’s team produced an e-waste training manual aimed at developing best practice in waste handling, such as removing copper wiring from electronic cables using a cable stripper, instead of open burning. GIZ is now considering creating a workshop in which prototypes made from e-waste can be tested.

By working with the likes of the Meltwater Entrepreneurial School of Technology, a pan-African training programme, and the start-up workshop Impact Hub, GIZ could help entrepreneurs wanting to commercialise their upcycled innovations, he says.

The future of upcycling

Agbogbloshie’s ‘decarbonisation divide’ issues remain, however. “All that has been done is how to redevelop the place, and not the people,” says the urban geographer Amankwaa.

Past efforts to remediate the site have ignored the informal, specialised e-waste workers, refurbishers and recyclers who process up to 95 per cent of Ghana’s e-waste for recycling.

City officials want to reduce the threat of regular fires at the site — a fire in January gutted a section near the yam market — but structural demolitions at Old Fadama have displaced thousands of workers. Demolitions continued this month, causing some to become stranded even as Ghana enforced a partial lockdown of Accra in response to the COVID-19 pandemic.

Accra authorities justified a June 2015 demolition as a way to deepen and widen the nearby Korle Lagoon after flooding killed around 150 people earlier that month. E-waste processing sites were saved only after protests from locals.

Yet, the Agbogbloshie site continues to attract investment to improve the area. In February, the Ghanaian and German governments began the second phase of a €10 million e-waste programme that has already funded a new technical training centre and health clinic.

He argues that future developments of the site should be inclusive, taking advantage of people’s techniques and skills for collecting materials.

Doing so might just sustain the next generation of upcyclers and refurbishers.

“You can close Agbogbloshie, but you cannot [remove] the skills, the talents and the knowledge that these people have,” he says.

This paper has first been published by SciDev.net