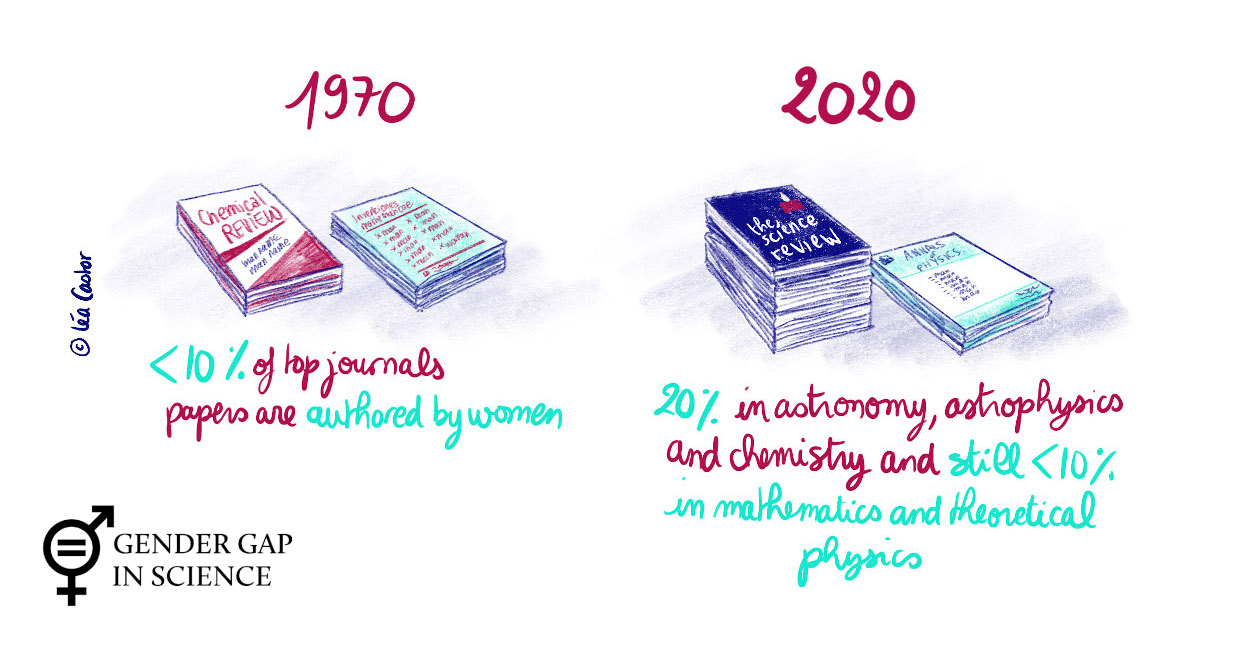 In the analyses of academic publications, did you observe any changes in authorships by women over time?

The answer is a clear yes. In Mathematics, it is remarkable to point out that the proportion of women among authors of scientific papers has increased steadily, growing from less than 10% for the 1970s cohorts to over 27% nowadays. And the evolution in Physics and Astronomy is similar.

Is there a reduction over time of the gender gap in publication patterns?

Drop-out rates, which used to be higher for women, are converging on similar values for both genders. For many years a “productivity gap” was observed: that is, there was a disparity in the academic performance of male and female researchers. The productivity gap is becoming narrower, although in recent cohorts this trend shows signs of stagnation. In Theoretical Physics and Mathematics, women from the cohorts 1995-2005 publish at a rate of 85-90% of the outputs of their male counterparts after 10 years of an active academic career. In Astronomy and Astrophysics the figures show an even more equal picture, with female astronomers publishing at a rate of 95% of the outputs men produce.

How does the publication gender gap look like in various disciplines?

It is noteworthy that the proportion of women authoring papers in top journals has been significantly increasing in Astronomy and Astrophysics as well as in Chemistry. However, it remained static in various top journals in Mathematics and Theoretical Physics and at a very low level, beneath 10%, which is significantly below the overall proportion of women authoring papers.

There seems to exist a pattern of fewer women authors in theoretical disciplines and subdisciplines while a larger presence is found in applied and collaborative fields. The question therefore arises as to what role is played by research collaborations and to which extent larger academic networks help women’s careers.

In which countries did you observe the highest proportions of women authors?

In Astronomy and Mathematics, the countries with the highest relative proportions of women are located in Europe. Germany and France have a significant scientific weight in both disciplines, in particular in Astronomy and Astrophysics. Countries in Eastern and Southeastern Europe are also relatively strong in terms of women’s presence. Particularly notable are Italy, Turkey, Romania, and Balkan countries like Bulgaria, Serbia and Croatia.

The USA enjoys a leading position in the production of scientific research as a whole, and interestingly, the contribution of its female mathematicians and astronomers does not greatly deviate from the average ignoring gender. In South America the most positive situation for women is found in Argentina.

There are only very few countries from other continents with a relatively good representation of women: specifically, for the participation from Africa there is either too little data to provide meaningful statistics or women are strongly underrepresented, especially in Astronomy and Astrophysics. In Iran, India and China women represent a minority in both disciplines, but especially in Astronomy. In most Asian countries the presence of women is very small. A positive exception in both fields appears to come from Pakistan.

Given the aim of project, your study of publication patterns has been mainly directed at obtaining information on the gender gap in science. What can you say about Publication Patterns more generally?

Our methods make it possible to observe the evolution of publication patterns globally: the role of collaborations and the proportion of single author papers, the geographical distribution of scientific networks, and the diversity of practices among various disciplines. They open up a fascinating collection of research problems.