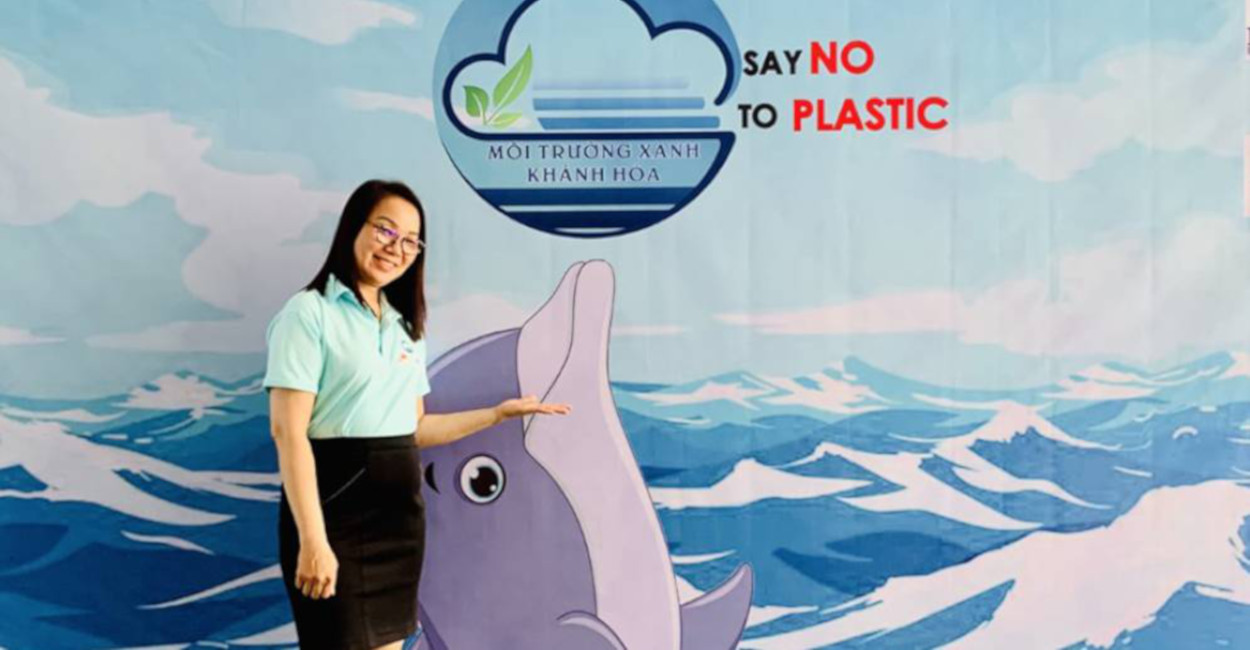 Dang Thuy Binh, a scientist who studies river biodiversity in Vietnam tells about her work, and being a woman in science.

The Mekong River, or simply Mekong, is the longest river in South-East Asia, connecting Cambodia, China, Laos, Myanmar, Thailand and Vietnam physically and economically. Considered as one of the richest areas of biodiversity in the world, Mekong is home to thousands of plant and animal species, with more being discovered.

However, the region now faces natural and man-made threats: besides climate change, pollution, agriculture and the building of dams, mainly for hydropower, and is threatening the ecological stability of the delta as well as the livelihoods of people living along the river.

Dang Thuy Binh is one of the scientists at the forefront of studying the decline of Mekong’s biodiversity. As the leader of the ‘Biodiversity and Conservation’ research group and senior researcher at the Institute of Biotechnology and Environment, Nha Trang University (NTU), Vietnam, she has led and participated in national and international research projects on marine biodiversity and the Mekong. Her research informs policies for biodiversity conservation, fisheries management and food security not only in Vietnam but in the other countries along the Mekong.

Binh, who once dreamt of becoming a journalist, is one of the few female scientists at the Institute, where she has previously served as the vice-director. She takes equal joy in doing research and in teaching her students, whom she credits for her energy and enthusiasm for work.

Binh talks to SciDev.Net about her research, the challenges women scientists face and the importance of passing on her knowledge of the richness of the Mekong to succeeding generations.

From dreaming of being a journalist, you became a scientist instead. What led to this shift in interest to science, particularly marine biodiversity and conservation?

From an early age, I loved literature very much and wanted to become a journalist in order to go and experience, to convey meaningful messages of life. The path to science is not accidental, but according to the wishes of my mother. She thinks that [a] literature career will bring a miserable life in the future because the salary is very low.

During the first two years of college, I still lost my soul with poems and have dreams of becoming a journalist. Only in the last two years in college did I really focus on studying and started to love biology and have a passion for understanding the world around me. I studied master’s in marine sciences and PhD in marine biodiversity, and since then, the path I chose to devote is aquatic biodiversity conservation.

What area are you concentrating on now? How does it compare to the previous work and projects you have been engaged in?

Currently, I work as a lecturer and senior researcher at the Institute of Biotechnology and Environment, Nha Trang University. I am the leader of ‘Biodiversity and Conservation’ research group, in charge of enrolment promotion, communication and external cooperation of the Institute. At the same time, I am a collaborator on foreign cooperation of NTU.

Compared to my previous job that focused more on management, now I have more space to do scientific research and to participate in community activities. I also partly satisfy my dream of becoming a journalist as administrator of two websites run by the Institute and our research team, and also that of the Institute’s fan page and the student fan page. The students have infused me with youth, enthusiasm and energy so that I can continue to serve the younger generation and the community.

Can you tell us about the work that you are doing on the Mekong River? What are the issues and challenges that you have come across in your studies there? How will your work affect the coastal communities and fisherfolk living along the river?

Our study of the Mekong is a long-term study. We started in 2013 (Project Peer 2—7) when studying freshwater fish biodiversity and population genetics of three fish species in the Mekong Delta. Our research soon received the attention of USAID and expanded the research to the lower Mekong countries (Cambodia, Laos, Thailand and Vietnam). In 2016, we partnered with NGO National Heritage Institute to conduct research focusing on the 3S (Sekong, Sesan and Srepok) Mekong river. In 2017, Myanmar was added to our network.

We have collected more than 20 species of Mekong fish in five-member countries, conducted research on conservation genetics, and published a number of articles in high-impact journals. We also raised our voices at several regional and international conferences.

In the progress of projects, we face many difficulties and challenges. First, we had to learn and master genetic methods and techniques, especially the next sequencing generation and the methods of analysing data. At that time, this technology was new not only to us but also to the world. With the support of USAID and our US partners, we have built a functional genetic lab, and through that, we have also assisted our network partners, gradually improving their capacity for research on biodiversity and conservation genetics.

Our finding results have shown the diminished resources or the potential loss of resources of exploited fish in the Mekong River, especially on the 3S river. Human impacts (environmental pollution, hydropower dam development) and climate change have changed the dynamics of Mekong fish populations, possibly leading to local extinction in the near future. We hope that our voice will reach policy makers and stakeholders in the region for solutions to minimise the impact of the above activities, thereby protecting fisheries resources, which is the livelihood of more than 18 million people living along the Mekong River.

The work that you are doing has an impact on the environmental management of the Mekong river. How important are biodiversity conservation and fisheries management in the Mekong region, particularly Vietnam?

As you know, we have always had a conflict between environmental protection and economic development, and the Mekong is no exception. Although not one of the longest rivers in the world, the Mekong is second in fish biodiversity, just behind the Amazon River. The decline in biodiversity due to human activity, especially the development of hydroelectric dams, is well documented. Our research helps strengthen the evidence and calls for practical solutions to mitigate and prevent undesirable consequences.

Biodiversity conservation and sustainable resource management are, more than ever, important. We are stealing the beautiful nature from future generations. To avoid that, we need to preserve the cradle of biodiversity, the Mekong River, and more specifically the Mekong Delta in Vietnam. The Mekong Delta is very important to food security in Vietnam and around the world and is a strategic area for Vietnam’s agricultural and aquaculture development.

Which type of work do you feel more in line with, being on the field or being in a classroom, teaching students?

I love the two. Being in the field sampling gives me a wonderful feeling, even though I sometimes get motion sickness, and when I see the beautiful nature and gain practical knowledge. I am fortunate to have the opportunity to convey my knowledge and practical experience to students as a lecturer. I hope that this stream of knowledge will continue to be passed on to the next generations through our young instructors and students.

What has been your experience like as a female scientist in Vietnam? What were the challenges that you faced and how did you overcome these?

In Vietnam, we have gender equality in education. However, it is undeniable that being a female scientist is more difficult and challenging than a male scientist. My experience is spending many nights staying up late learning English after my older son has fallen asleep; wandering nights while away because I am missing my boys; nights up at the laboratory and then walking back to the dormitory at 2 a.m. Besides those memorable experiences, I also have many sublime moments when I have interesting results, or feel warm when receiving the help of supervisors, partners and colleagues. As a female scientist, I am also a bit proud not only of the difficult journey I have had but also the achievements I got.

A challenge that every female scientist has to face is the balance between home and work. It takes us twice or even triple the time, compared to ordinary people, to be able to complete all the tasks and responsibilities. I often get motion sickness when traveling, so this is also a challenge that is not easy to overcome because I have to travel for sampling as well as participate in project activities.

You served as the Institute of Biotechnology and Environment’s Vice-Director, a leadership position. How important do you think it is for women to serve as leaders in science?

I used to hold a leadership position as Institute Vice-Director. I have left this position to focus on scientific research. However, I always support the young leaders of the institute, especially in scientific research and international cooperation. I think it’s very important for women to be leaders, and we need more women leaders in the future to speak up for feminism and to support women in their pursuit of dreams and passion.

What advice can you say to women, particularly those from Vietnam, who are interested in pursuing careers in science?

Wherever we are born, we are fortunate to be women. We need to cherish and love ourselves. Although gender inequality still exists somewhere in the world, wherever we are, we need to fight for the legitimate rights of women.

For young female scientists in Vietnam and around the world, do not give up your dreams and imagination – it will be the most beautiful luggage you will carry throughout your life. Challenges and difficulties are inevitable on the way to conquer the top of science. Just go and you will reach; if you fall, get up; if this door is closed, open other doors. The future is in your hands.