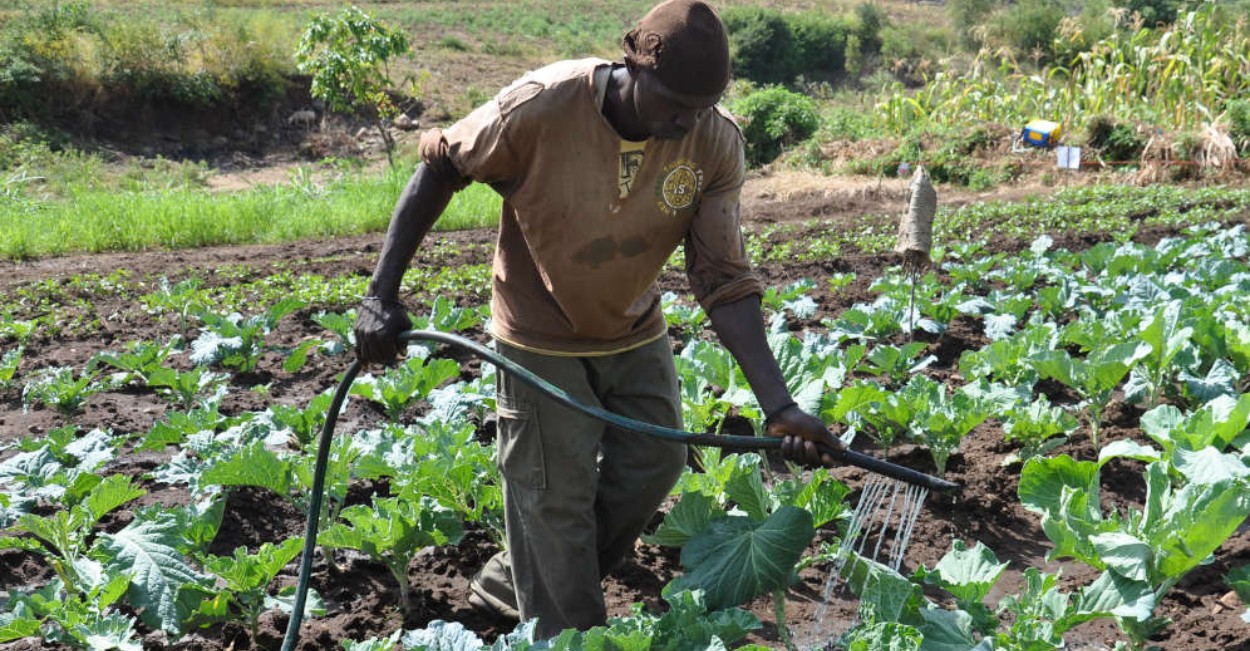 David Kitavi is a managing founder of Ushirika Children Centre, a school located in the heart of the Kibera informal settlement, on the outskirts of Kenya’s capital, Nairobi. His role puts him at the heart of life at the centre, regularly interacting with parents and students alike.

“Many children in this school are vulnerable and come from poor families,” Kitavi tells SciDev.Net during a visit to the centre. “Many of the parents struggling with financial challenges have migrated from rural areas in search of jobs to draw an income for their families.”

Many of these families migrated from rural areas after their primary occupation – farming – failed to provide enough income to meet their needs. These families, Kitavi says, have been hit by prolonged droughts that led to low crop yields, particularly of staple foods like maize and beans.

“We realised that there is a need to empower vulnerable families to adapt to climate change and enhance food security,” Kitavi says.

So, Kitavi linked up with the Nairobi-based Africa Research and Impact Network (ARIN), a network of over 200 researchers and policymakers drawn from 36 countries working to share research that can help communities adapt to climate change.

Through a micro-grant from the Adaptation Research Alliance (ARA), a global network of adaptation researchers and organisations, ARIN set up community adaptation laboratories in some of Nairobi’s informal settlements. The micro-grants are small sums of money designed to help drive country-level activities and increase communities’ climate resilience.

“Through the community labs, we wanted to get the understanding of climate risk at the community level to guide climate risk planning, especially for cities,” says Charles Tonui, a research fellow at ARIN and the African Centre for Technology Studies (ACTS).

“There is a lot of good work going on at the community level that could inform climate change adaptation strategies, but it is not well profiled at the policy level,” says Joanes Atela, ARIN’s convenor and head of the climate resilient economies programme at ACTS.

Tonui tells SciDev.Net that ARIN has consolidated the voices of more than 3,000 people, including 150 community-based organisations in Nairobi’s informal settlements, and government and civil society policymakers focused on climate change adaptation.

“We find that interpretation of climate risk among the urban poor is different from that of the policymakers and even the civil society,” says Tonui.

In the Mukuru informal settlement, Tonui says, climate risk was not considered in the area planning by the local government. “We have also realised that climate risk integration is missing in many cities across Africa,” says Tonui.

Jesse DeMaria-Kinney, head of the ARA secretariat, says that people at the grassroots level need to be equal partners with policy and research communities when it comes to generating and applying effective adaptation knowledge.

“What the ARA calls ‘radical collaboration’ will help researchers better understand the problem being faced in its full complexity, so that collaboration is more valuable and appropriate for the needs of communities or other end-users,” DeMaria-Kinney says.

Such collaborations need time to develop, he adds, as they are unlikely to spring up after a single workshop or meeting. Climate change adaptation solutions require new approaches, he adds.

Atela says there are plenty of opportunities to turn platforms that respond to emergencies into community-based, sustainable platforms that lead on climate risk learning. Tonui says that 14 current Africa-based ARA grantees hold weekly and monthly community-led conferences to share experiences and ideas on climate change adaptation. A total of 25 micro-grants were awarded by the ARA in Africa, Asia and Latin America.

According to DeMaria-Kinney, the community led adaptation approach involves putting into practice research principles that are focused on creating impact, with researchers building relationships with stakeholders from policy to practice.

These relationships, he says, are aimed at creating projects that are driven by the needs of communities responding to climate change, while supporting long-term capacity development and reducing structural inequalities. “Such collaboration requires an up-front investment in time to build and strengthen trust,” he says.

“Climate change is affecting communities at different rates across the globe, and we need to utilise evidence and expertise from the multiple knowledge types that exist in order to find appropriate responses.”

By galvanising radical collaborations, DeMaria-Kinney says, community members who will use adaptation tools become part of the research teams, while researchers are part of the implementation on the ground: “As a result, adaptation actions will have impacts that meet the needs of those most affected by climate change.”

According to Atela, climate change adaptation is highly context specific and should respond to the needs of a specific area. Atela says this should also factor in the diverse nature of vulnerable communities in the global South, which include children, women, marginalised communities and immigrants.

Albert Salamanca, a senior research fellow at the Stockholm Environment Institute’s Asia Centre, says that communities have their own knowledge and knowledge systems, which are particularly extensive among indigenous peoples, with many communities having collectively owned traditional ecological knowledge.

“As such, scientists – especially those trained in Western science – need to understand the existence of this form of knowledge and provide opportunities for them to be used in adaptation situations,” Salamanca tells SciDev.Net.

“In other words, what we need is for both parties to meet halfway and explore ways upon which their independent knowledge systems can reinforce each other, rather than negate each other.” If this happens, he says, employing adaptation practices on the ground will have greater impact and meaning.

“Adaptation is local,” adds Salamanca. “Groups and communities encounter situations that require them to adapt where they live and make a living.”

For DeMaria-Kinney, sustained collaborations between researchers, communities and policymakers could hold the key to developing the tools that communities need to adapt to climate change.