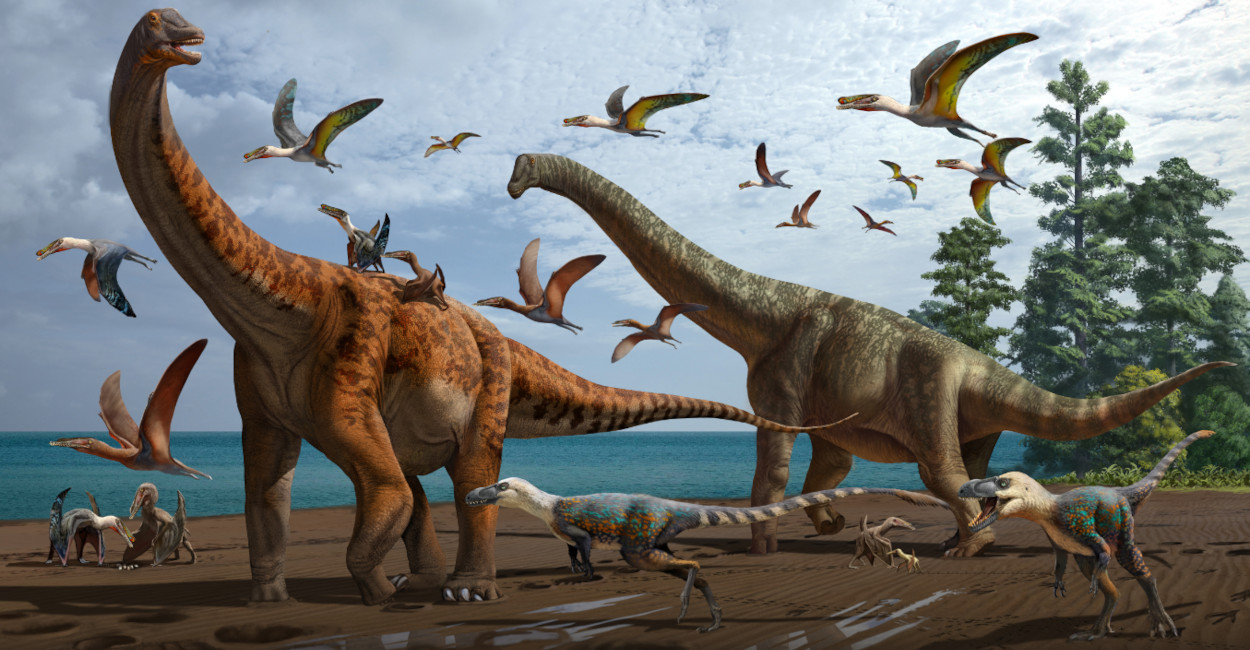 Two new species of herbivorous giant sauropods have been found in a place where only flying pterosaurs were known. They provide a new insight into the ecology of this Chinese region during the Early Cretaceous.

A joint Sino-Brazilian research team led by Dr. Wang Xiaolin from the Institute of Vertebrate Paleontology and Paleoanthropology (IVPP) of the Chinese Academy of Sciences has reported new dinosaur fossils from the Early Cretaceous Hami Pterosaur Fauna. All three of the newly reported dinosaurs are classified in the Somphospondyli of the Sauropoda.

The Somphospondyli, a group of large size sauropods, is a lineage of Titanosauriformes. Most somphospondylans are large-bodied herbivores.

This is the first time that somphospondylans have been reported from the Early Cretaceous of Xinjiang and they are also the first dinosaurs reported from the Hami Pterosaur Fauna. The Early Cretaceous Hami Pterosaur Fauna is the largest and most abundant pterosaur fossil locality in the world. A large number of three-dimensional preserved male and female pterosaurs and pterosaur eggs and embryos have been found there.

The dinosaur fossils reported in the new paper are the first non-pterosaur vertebrates from the Hami Pterosaur Fauna. They were collected from a horizon equivalent to that of the pterosaur fossils. The three specimens were found about 2-5 km apart.

The researchers identified the first specimen as a new euhelopodid taxon and named it Silutitan sinensis based on some characteristics of its cervical vertebrae. They named the second specimen Hamititan xinjiangensis; it is regarded as a new titanosaurid taxon.

Silutitan sinensis preserves an articulated series of six cervical vertebrae (from the 10th to 15th). The length of a single cervical vertebra is between 455–540 mm and the longest is 540 mm. Its body length is estimated at more than 20 m. An incomplete lower jaw of a pterosaur, Hamipterus tianshanensis, was recovered associated with the holotype of Silutitan sinensis.

A carnivorous dinosaur was there

A small theropod tooth was found associated with the holotype of Hamititan xinjiangensis. It is the first report of a theropod dinosaur discovered in this area.

Because no tooth mark was found on any of the vertebra of the holotype of Hamititan xinjiangensis, it is uncertain whether this theropod could have fed on sauropods’ carcasses. The herbivorous sauropods and carnivorous theropods provide new insight about the ecological diversity in the Hami Pterosaur Fauna.

Phylogenetic analysis shows that this taxon is the sister taxon of Euhelopus. However, this classification was only supported by the characteristics of the cervical vertebrae, and most of the clades were collapsed.

The researchers then scored Silutitan and Hamititan as separate taxa. In both results, Silutitan fell as sister-taxon of Euhelopus, supported by several characteristics. Both results show Hamititan is a member of Titanosauridae, though the positions of Hamititan were unstable among this clade.

This study increases the diversity of the Hami Pterosaur Fauna as well as information on Chinese sauropods, providing further evidence for the widespread diversification of somphospondylans during the Early Cretaceous of Asia.

This report was first published by the Chinese Academy of Sciences.