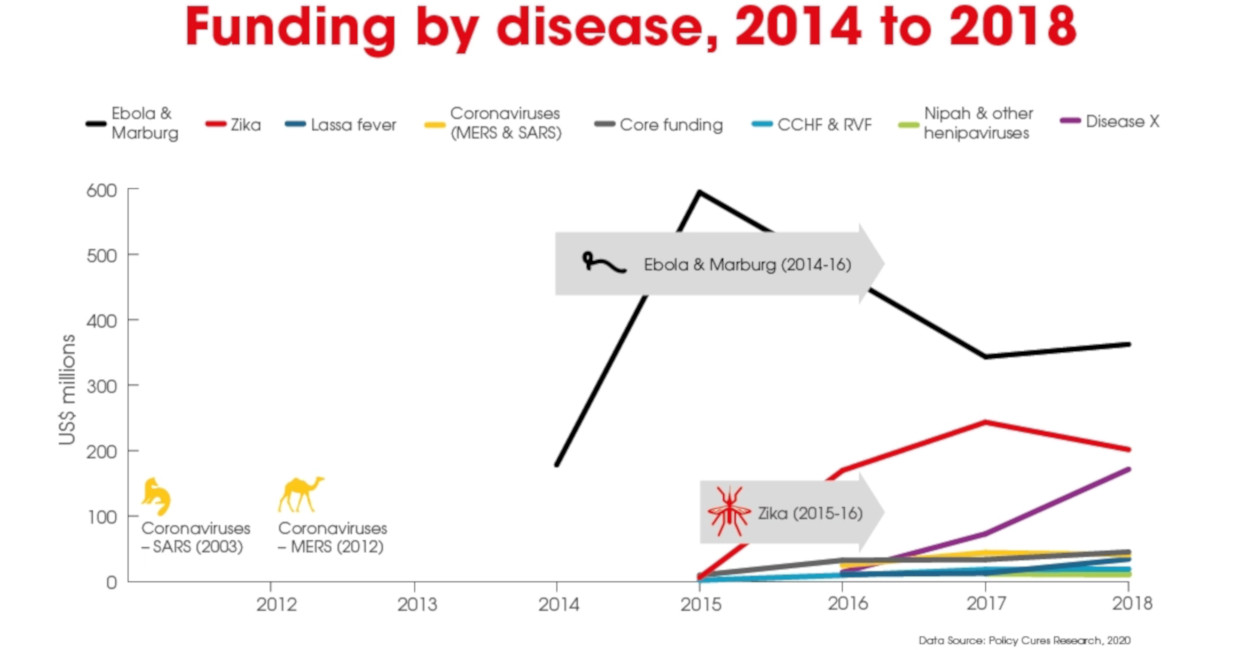 Research funding for emerging infectious diseases rarely reaches the countries where such diseases do the most harm.

Despite rapid growth of global spending to tackle emerging infectious diseases, which largely impact the developing world, much of the basic research and development takes place in industrial countries — usually those that provide the funding. This is according to the latest G-Finder report, compiled by global health think tank Policy Cures Research and published 17th September.

The United States was found to be the biggest emerging infectious disease research donor, but also the biggest funding recipient. Between 2014 and 2018, the country provided 80 per cent of global public funding for the priority diseases identified by the World Health Organization R&D Blueprint for action to prevent epidemics. These include Ebola, Zika, coronaviruses and the as-yet unknown Disease X.

Paul Barnsley, a senior analyst at Policy Cures Research and co-author of the report, tells SciDev.Net that the picture given by the data may be slightly skewed, as rich nations are better at providing numbers, whereas other major funders, such as China or Brazil, are less willing or able to share details of their spending. However, he agrees there is a “strong correlation” between who gives the money and who gets it.

“We do find that funders like to fund domestic organisations,” he says. “It is viewed as a perk of funding that you create local infrastructure and national champions.”

Attention of the public

Research and development funding between 2014 and 2018 was primarily funnelled towards diseases that had the attention of the public, rather than towards preventing future epidemics or addressing those diseases that cause the greatest health burden, the report found.

“The degree of imbalance between diseases is striking, and it impacts R&D,” Barnsley says. “Funding is very much driven by epidemics. It does not square with a forward-looking approach.”

The issue is best illustrated by data on coronavirus research in the years before the COVID-19 outbreak. Funding for coronaviruses — Middle East Respiratory Syndrome (MERS) and Severe Acute Respiratory Syndrome (SARS) — made up just 4.6 per cent of total basic research funding for emerging infectious diseases between 2016 and 2018 (no data was available for earlier years). Total annual funding for coronaviruses stood at US$41 million in 2018.

By comparison, funding for Ebola research skyrocketed from $178 million in 2014 to $594 million in 2015, the height of the West African outbreak. As of 2018, it was hovering around $360 million a year, but the report’s authors expect funding levels will drop sharply as Ebola fades from public consciousness.

Preparation for the next pandemic

Similarly, Zika research received just $6 million in 2015, but after Brazil declared a public health emergency in 2016, this amount was boosted to $243 million in 2017.

“[W]e’ll never be prepared for the next pandemic if we only invest in R&D targeting diseases grabbing headlines at the time,” says Policy Cures Research chief executive Nick Chapman.

The research world is on alert for Disease X — the name used to describe a previously unknown illness that becomes a pandemic. The mystery disease is seen as one of the greatest threats to humanity by many health policymakers.

In 2016, Disease X and ‘other’ research, including platform technologies and broad-spectrum antivirals, received about $14 million. Just two years later this was more than $171 million, according to the G-Finder data.

These trends were noted by Madhukar Pai, director of the McGill International Tuberculosis Centre at McGill University in Montreal, Canada. He predicts that future reports on 2020 and 2021 funding data will show “100 per cent covidisation” of infectious disease research funding.

“Every funder and government is now pulling money out of every other area and sinking them into COVID-19,” he tells SciDev.Net. “While this might make sense in the short run, I worry that such short-term, crisis-driven funding is neither strategic nor sustainable.”

One development highlighted in the report is a decline in the global dominance of the United States in disease funding. Its share of overall emerging infectious disease research funding was 85 per cent in 2014, but fell to 68 per cent in 2018.

Meanwhile, other countries such as the United Kingdom, France and Germany grew their share, as did Japan and Norway through participation in the Coalition for Epidemic Preparedness Innovations (CEPI), an organisation to pool vaccine research funding established in 2016.

No boundaries for global health

Barnsley, however, points out that the United States still shoulders the bulk of the funding burden for emerging infectious disease research. “It does play a dominant role in producing these public goods and deserves credit for that,” he says.

But Pai is more critical, saying that recent events, such as the United States announcing its withdrawal from the World Health Organization, have left the country’s image sullied.

“Extreme nationalism is the last thing the world needs now,” he says. “The coronavirus pandemic and climate change are proof that many threats in global health respect no boundaries.”