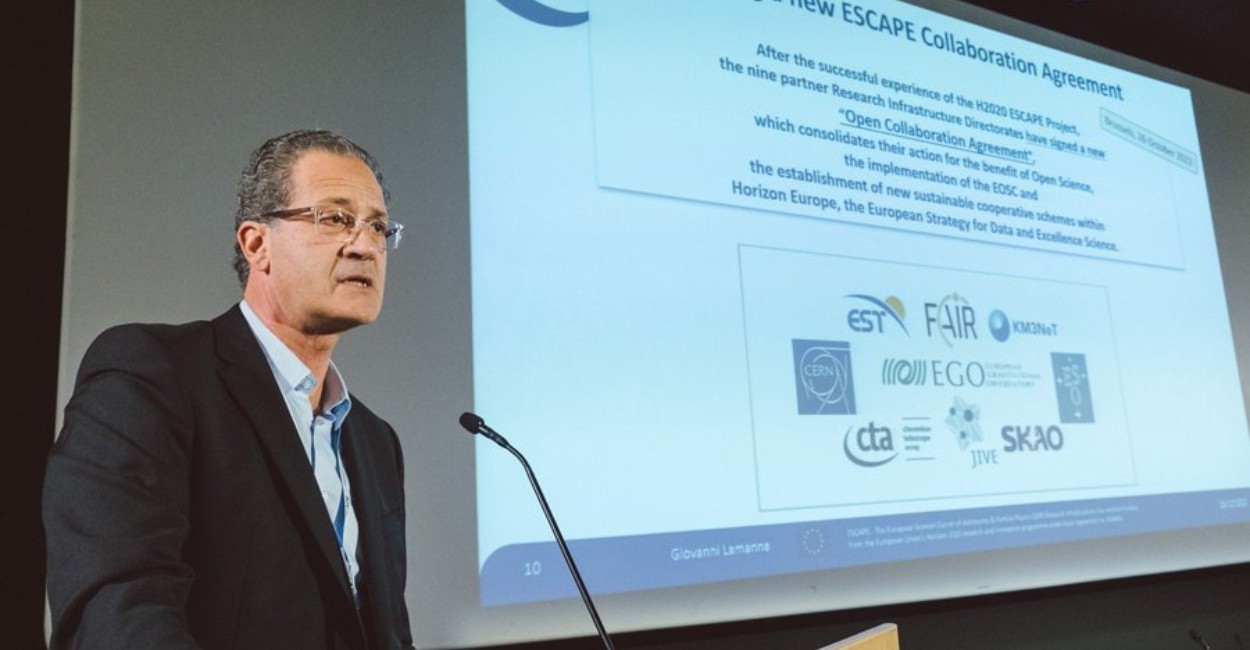 Many of Europe’s biggest facilities in physics-related disciplines have just cemented a long-term deal to commit to sharing and processing open data.

This agreement was signed at the “ESCAPE to the Future” conference on October 25-26, 2022, where partners of the European Science Cluster of Astronomy & Particle physics ESFRI research infrastructure (ESCAPE) project as well as members of the scientific community and the European Commission gathered at the Royal Belgian Institute of Natural Science in Brussels (Belgium).

ESCAPE, initiated in 2019, has brought together a cluster of ESFRI (European Strategy Forum on Research Infrastructures) projects and other world-class research organizations with the aim of implementing a section of a European Open Science Cloud (EOSC) to foster Open Science in astrophysics and particle physics. As the ESCAPE project, funded by the H2020 grant, is coming to its end, the members of the cluster shared their results and achievements, discussed the next challenges and presented an outlook for the future.

The event represented the starting point of a new era: after the successful experience of the ESCAPE project, the nine core ESCAPE Research Infrastructure partners have signed a new Open Collaboration Agreement, which consolidates their cross-border action for the benefit of Open Science, the implementation of the EOSC and the establishment of new sustainable cooperative schemes within Horizon Europe for the benefit of the European Strategy for data and excellence science.

During the implementation period of the ESCAPE project, partners from the astronomy, astroparticle, particle  and nuclear physics communities have worked together on the development of software for Open Data management, in a cross-border and multi-disciplinary open environment, according to FAIR (Findable, Accessible, Interoperable and Reusable) principles. The “ESCAPE to the Future” event serves as an end point of the H2020 funded project, where partners discussed the achieved goals and future work lines.

“Scientific Research is progressing towards the new paradigm of Open Science for more open, transparent, collaborative and inclusive scientific practices to enhance the impact of science in our society, fostered by the expansion of information and communication technologies. This is the fundamental motivation of the ESCAPE scientific community and it is also the challenge shared by pan-European Research Infrastructures (RIs) that are members of the ESCAPE science cluster,” explains Dr. Giovanni Lamanna, Coordinator of the ESCAPE project.

“The successful work programme, the achievements and the ability of ESCAPE RIs to cooperate in the context of open data intensive science to lead to new insights and innovation are widely recognised. The ESCAPE RIs are willing to continue cooperative actions by joining their efforts. Bottom-up demands of the involved scientists not to interrupt but to continue the cross-fertilisation in science and innovation that ESCAPE has been able to build, are strongly considered. For these reasons a new ESCAPE open collaboration agreement is established.”

The new Open Collaboration Agreement, publicly announced during the “ESCAPE for the Future” event and signed by all the Directors of all the research infrastructure partners, will take effect from January 2023, and will also help continue the synergies and joint work of all five domain-based Science Clusters (see paragraph “ESFRI Clusters” below) involved in the implementation of EOSC. The agreement is also open to further research infrastructures to join. This agreement is expected to maintain the collaborative and human experience represented by the Science Cluster and strengthen the role and impact of astronomy and nuclear/particle physics in the field of open science and, more broadly, in the European Research Area.

About Science Clusters and EOSC

European Open Science Cloud (EOSC) is a cloud for research data in Europe allowing for universal access to data; a single online platform where all European researchers will be able to: (i) find, access and re-use data produced by other scientists; (ii) deposit, analyse and share data they have been paid to produce. EOSC will help increase recognition of data intensive research and data science. Its architecture is developed as a data infrastructure common serving the needs of scientists, providing both common functions and localised services delegated to community level. EOSC will federate existing resources across national data centres, European e-infrastructures and research infrastructures by gradually opening up its user base to the public sector and industry.