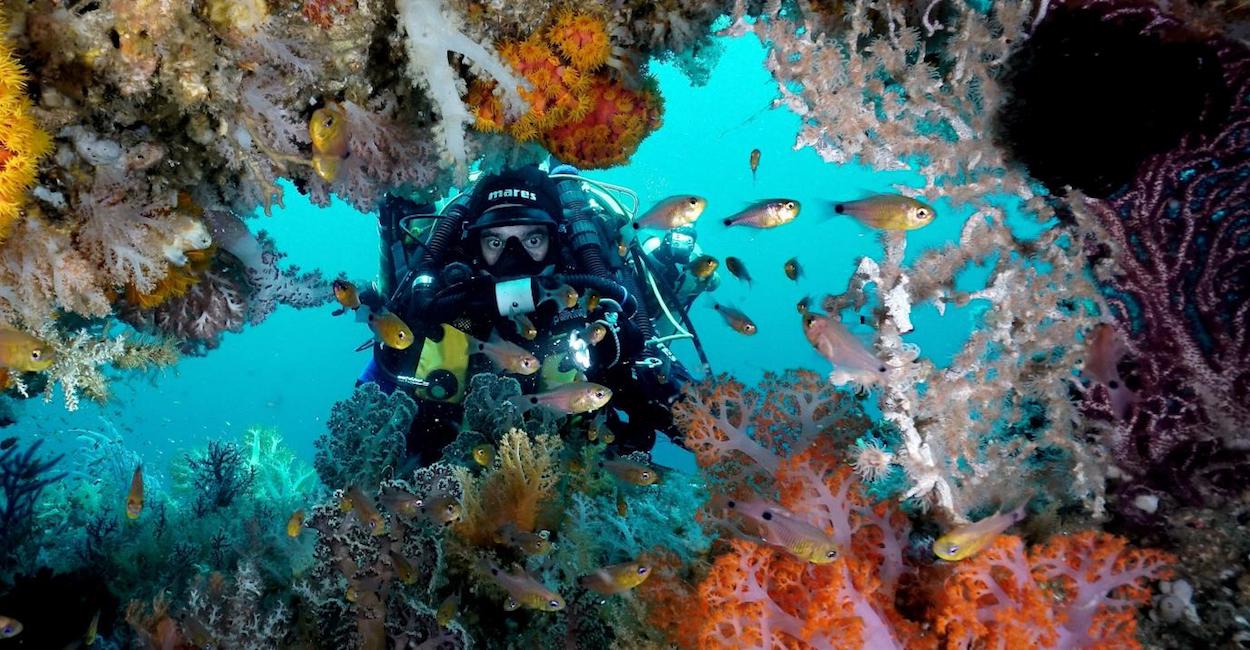 In 2019, the report of the Intergovernmental Platform on Biodiversity and Ecosystem Services (IPBES) recalled the extent of biodiversity loss worldwide. In this context, the improvement of biodiversity exploration techniques is essential to implement targeted actions to protect ecosystems.

Indonesia is the world’s largest archipelago, located between the Indian and Pacific Oceans. It encompasses the heart of the Coral Triangle, the region with the richest marine biodiversity on the planet, with nearly 20% of the world’s coral reefs.

West Papua is a region of Indonesia located at the north-western tip of the island of New Guinea, north of Australia. This region is one of the last remaining pristine areas in Southeast Asia.

The Lengguru limestone karsts evolved through complex tectonic uplift movements. Over the last 10 million years, they have formed ‘islands within islands’, including the Raja Ampat, and today constitute an important reservoir of biodiversity with very high levels of endemism.

In 2017, IRD, LIPI and the KP Polytechnic School of Sorong led the Lengguru scientific expedition. The aim: to assess the functional, genetic and morphological diversity of several groups of marine organisms (reef fish, echinoderms, hard corals and gorgonians), from the surface to the mesophotic (-100 meters deep) and even twilight zone of coral reefs.

Researchers deployed several techniques: observations, sampling with inventory and morphological description, characterization of individuals by DNA barcode, baited underwater video systems and environmental DNA (eDNA). The exploration and sampling effort focused on several reef slopes in front of the Kumawa and Lengguru Ranges, in and off Triton Bay (from -100 m to the surface), using closed circuit rebreather diving.

In this study, researchers collected seawater samples in the heart of the Coral Triangle. They encountered a problem: in order to accurately identify the species present in the area thanks to eDNA, it is necessary that their DNA barcode is already known.

However, for many species, this information is not available, making it impossible to determine the identity or number of species for which the DNA sequence has been found. An alternative to circumvent this limitation is therefore to extract a diversity of operational taxonomic units (OTUs) from the metabarcoding of the eDNA.

For example, the researchers modelled OTU accumulation curves on collected seawater samples. They obtained an asymptote of up to 1,531 OTUs of fish, with 1,611 species of fish recorded in the region.

They were also able to accurately predict the distribution of species diversity among fish families based on asymptotes from the ETOs. “Thanks to eDNA, we have very accurately estimated the diversity of fish species in the area, with a lag of less than 5% compared to historical observations.”, says David Mouillot, Professor of Marine Ecology at the University of Montpellier, co-author of the study.

“The technique inaugurated here in a biodiversity hotspot has been deployed and improved many times since this study, notably during missions supported by the Monaco Explorations,” explains Régis Hocdé, research engineer at IRD and head of the Lengguru 2017 expedition. “We hope that this technique will make it possible to unveil a new facet of the world’s marine biodiversity, with exciting discoveries!”

This article was first published by IRD.