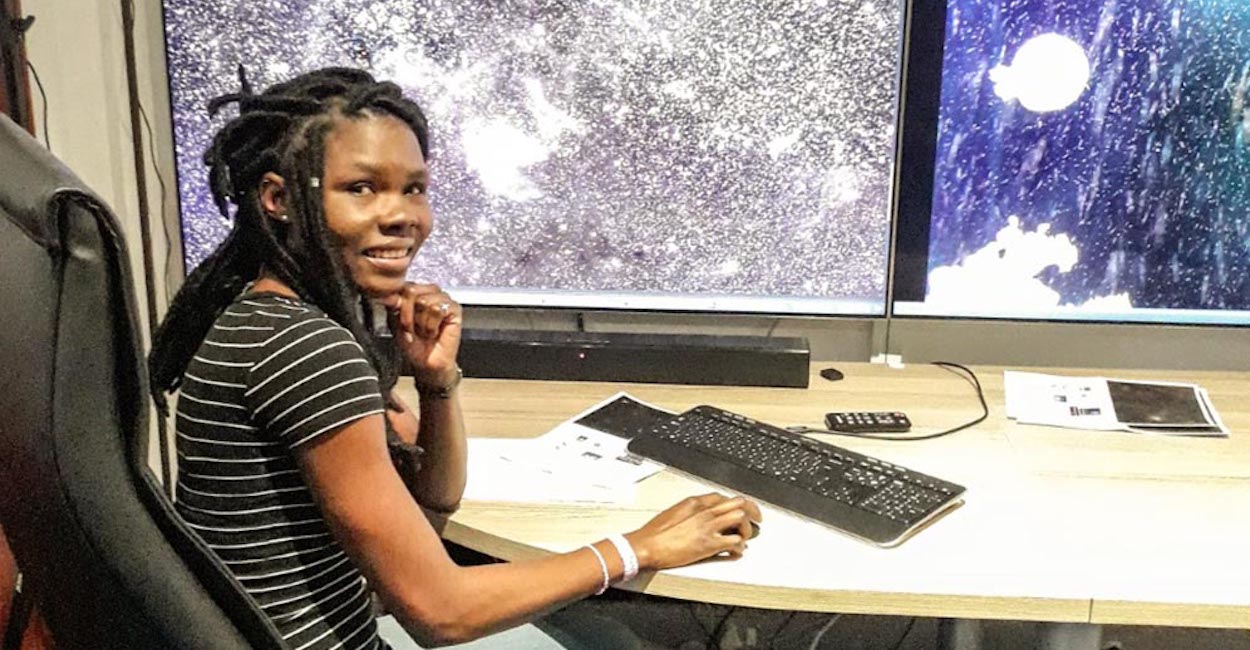 Last year, Marie Korsaga became the first female astrophysicist in West Africa after completing her PhD in astrophysics at South Africa’s University of Cape Town on the theme ‘The distribution of dark and visible matter in spiral and irregular galaxies’. It was the culmination of seven years of intense research.

The Burkinabe says she had always wanted to understand the phenomena of the universe, inspired as a girl by lunar missions. Now she hopes to share her knowledge with her fellow citizens, through projects aimed at breaking stereotypes and empowering girls to pursue studies and careers in science.

In an interview with SciDev.Net to mark the International Day of Women and Girls in Science on 11 February, Korsaga describes how she believes astrophysics can help boost infrastructure and jobs in Africa, and urges girls to fight to achieve their goals.

Where does your passion for astrophysics stem from?

From an early age, I have always been interested in the phenomena of the universe, such as the appearance of life on earth and shooting stars. I also enjoyed watching documentary films on astronomy, especially on the Apollo missions. But at the time, I never imagined that I would become an astrophysicist, because astronomy was an unknown domain in Burkina Faso. Besides, I had never met — let alone talked to — an astronomer in real life before my doing my degree.

Growing up, I intended to become a civil engineer because I also like construction. When I did my degree, astronomy had just been integrated as an optional subject in physics in Burkina Faso, and I seized this opportunity. My interest in scientific subjects allowed me to excel more easily in the subject and to pursue my postgraduate studies in astrophysics.

In Africa, girls are usually steered towards literary fields, and families do not always encourage them to do long studies. How did you cope with that?

It’s true that studying in a scientific field as a woman is a bit complicated. For example, during my career I faced comments such as “physics is too complicated for a woman, you will not be able to make a career in the field”, or even “you risk going crazy if you continue”.

These words did not influence my choice of career, because I liked scientific subjects and I also had the support of my family — especially my father, who always assured me that women can also have long studies and careers in sciences. That made me feel more confident.

How do you plan to put your know-how to good use in a country such as Burkina Faso where, like elsewhere in Africa, astrophysics is not a developed discipline?

Beyond research, I intend to contribute to the training of young people in science in Burkina Faso and in Africa generally by providing courses in universities. I also plan to take action to popularise science education in general, and astrophysics in particular, in countries where access to science is limited — to motivate young people to take up scientific studies, especially young girls.

Admittedly, efforts are being made by the government to break stereotypes, but a large part of society continues to think that girls should not undertake lengthy studies, especially in science. So I would like to help break down these stereotypes

In a continent where there is a lack of water, electricity and even food, does opting for astrophysics ignore the fundamental problems facing the region?

Since astronomy is a science that requires a vast field of knowledge, it enables skills to be developed at the local level. For example, if you take the telescope construction project in South Africa, which is one of the biggest projects in astronomy, it was established by engineers, computer scientists, technicians. So, in addition to strict astronomy, skills are developed that can be used effectively in other sectors.

An astrophysicist is someone who is almost a complete all-rounder in science — someone who has skills in physics, engineering, programming. All this is what makes people describe astronomy as the mother of all sciences. As well as being fascinating as a science, astronomy can be used as a development tool through, for example, education and tourism. The International Astronomical Union understands this and is trying hard to address the development component in developing countries, working to achieve the UN’s Sustainable Development Goals.

The typical example in Africa is the case of South Africa where the installation of telescopes has not only popularised science and created jobs for young people, but also boosted the local economy and infrastructure. Burkina Faso could well draw inspiration from these success stories and position itself as a centre of excellence in West Africa.

What difficulties have you encountered as a woman in your career in such a specialised and almost exclusive area?

My work went well, even though I encountered difficulties at one point and I felt that it was not progressing. I remember that while working on my thesis, my findings did not coincide with previous studies, and I needed to do rigorous work over a long period to ensure the reliability of my results. This revealed that the relationships between dark matter parameters and the brightness of galaxies were not standard as previously thought, but that they depended on the structure of the galaxy. I am very happy that I did not give up during these difficult times.

What are your most important projects now and how do you hope to help popularise astronomy in your country?

The plan is to build planetariums in Burkina Faso’s regions in order to give presentations on the universe to the general public. I would also like to install a research telescope, which will make it possible to develop research in astrophysics in Burkina Faso, to facilitate the training of students, forge links with researchers from other countries, and help the country and Africa to get ahead in astrophysics.

I would also like to work towards the establishment of scientific schools in Africa, specifically dedicated to women. This would encourage girls to take up scientific studies and contribute to the development of the continent. I will advocate for the establishment of high school astronomy and the creation of children’s astronomy clubs… to satisfy the curiosity of children about the universe and spawn an interest in science and technology.

I would tell them to fight to achieve their dreams because no one will do it for them; to choose sectors that they like, because doing something you love is always a pleasure and not a constraint. It is also very important to have self-confidence — it is the key to success. Maths and physics are difficult, of course, but if men can make a career out of it, why not women? Just because you’re a woman doesn’t mean you have to think that you can’t do things that are said to be difficult. There is nothing easy in life. I faced obstacles during my studies, but at no time did I use my status as a woman as an excuse to give up. You have to see beyond sex and make the issue of gender equality a reality.

This interview has first been published on SciDev.net