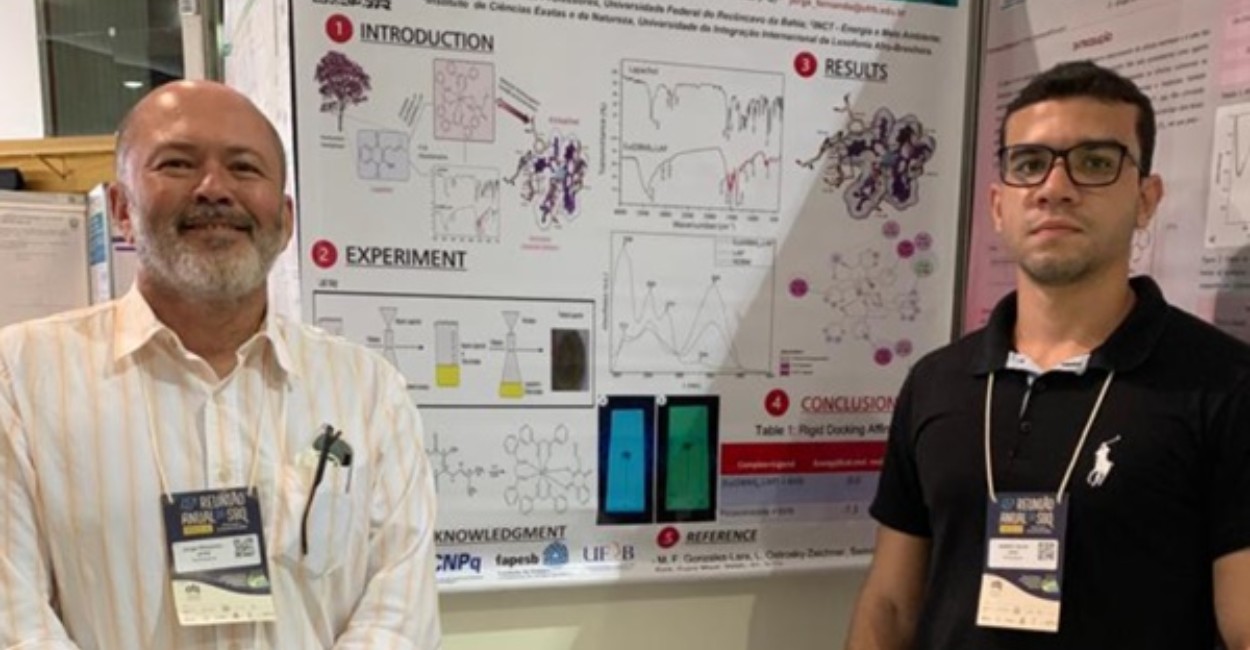 Andrei Marcelino Sá Pires Silva, who schools at Federal University of Recôncavo da Bahia, has been honoured at a meeting of the Brazilian Society of Chemistry, for carrying out a groundbreaking scientific research.

An undergraduate student in Chemistry, Andrei Marcelino Sá Pires Silva, who schools at the Federal University of Recôncavo da Bahia (UFRB), has bagged an award for his work, “Design of a new light-converting material based on Eu3+ combined with the natural binder lapachol and (EuDBM)3.2H2O”.

Silva received the honourific award at the main Chemistry event in Brazil and one of the largest in Latin America – the 45th Annual Meeting of the Chemical Society – held in Maceió (AL).

A Scientific Initiation student at the Photonic Materials Group, Andrei Silva was guided by Professor Jorge Fernando Silva de Menezes, and presented his work in an oral session in the Materials area (MAT), on June 1, 2022.

In the session on Materials, 108 works were accepted, of which 18 were nominated for oral presentation and three were awarded – one of them is the work of Andrei, a fellow of the Institutional Program for Scientific Initiation Scholarships (PIBIC), financed by the National Council of Scientific and Technological Development (CNPq).

Andrei’s work seeks to use low-cost materials (ipe sawdust) in the formation of a new material (EuDBM)3.2H2O, which will have its pharmacological properties tested in a new stage of scientific research. The novelty of the work is the combination of a low-cost material (lapachol) with a lanthanide-based system with the possibility of a pharmacological response as a fungicide or antitumor marker.

The 45th Annual Meeting of the Brazilian Society of Chemistry was held in the city of Maceió, bringing together, in a massive way, people from Brazil and abroad, including students, professors and researchers in the field of Chemistry and the like.

The Movement was conceived taking into account three points: the commemoration in 2022 of the bicentennial of the Independence of Brazil; the promulgation by the UN General Assembly of 2022 as the International Year of Basic Sciences for Sustainable Development (IYBSSD 2022); our country’s dependence on imported chemical inputs, as well as on various items and equipment, characterizing a flagrant lack of sovereignty in these matters, as clearly exposed by the health emergency caused by the Covid-19 pandemic.

The Movement, which will be part of the activities of the IYBSSD 2022 and the commemorations Brasil 200 Years, Towards Independence (coordinated by the Brazilian Society for the Progress of Science – SBPC), is composed of several fronts, which are being supervised by the SBQ board. .

One of these fronts is the production of a document of well-defined actions and goals to promote sustainability and Brazilian sovereignty through chemistry until 2050, taking into account the UN milestones for sustainable development (2030) and for zero carbon emissions ( 2050).