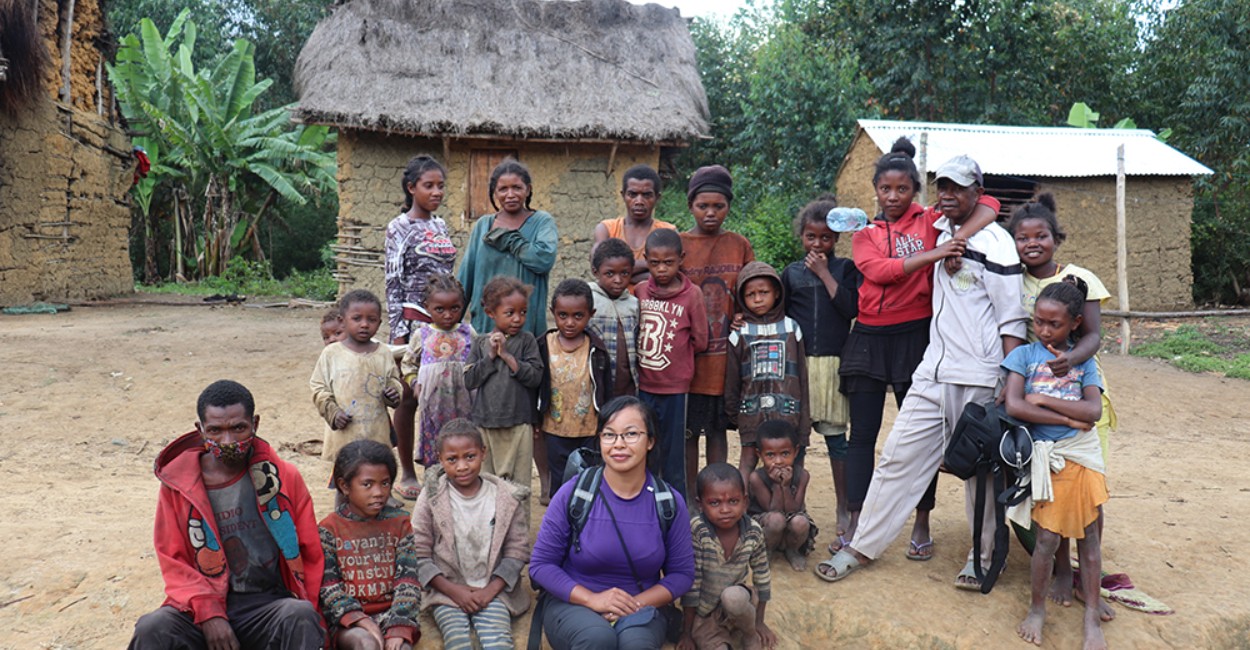 TWAS awardee, Sarobidy Rakotonarivo, is working to ensure that poor villagers in remote parts of Africa have their say in conservation measures that affect their lives.

Forestlands threatened by development need conservation policies to survive. But for such policies to be “humane”, they must account for the livelihoods of those who live in those remote areas, according to Malagasy socio-economist Sarobidy Rakotonarivo, the winner of the 2022 TWAS-Samira Omar Innovation for Sustainability Award. TWAS honoured her work combining research with policy engagement in Africa, including remote areas of Madagascar, Gabon and Kenya.

Rakotonarivo is a TWAS Young Affiliate and a researcher at University of Antananarivo in Madagascar. Her research focuses on remote forestland communities whose lives are deeply and directly affected by policies designed to protect natural lands, and her work helps rural people who might otherwise be ignored by such policies, advocates for their interests — and thus finds a proper balance between their well-being and the stability of nature.

The TWAS-Samira Omar Award is an annual honour sponsored by TWAS Fellow Samira Omar Asem of Kuwait, and carries a cash award of US$4,000. The prize honours scientists from Least Developed Countries who are working in a field tied to sustainability. Rakotonarivo is the sixth winner of the award, and past winners have been from Uganda, Sudan, Benin, Togo and Ethiopia.

“This award justifies the hundreds of hours of interviews I had with poor rural communities and the perseverance of engaging with busy policy-makers,” said Rakotonarivo. “It is a wonderful recognition and encourages me to work harder.”

Rakotonarivo’s work focused on the human dimension of forest conservation restrictions, particularly their impacts on people’s ability to live securely and well. Efforts to protect forestland through legal enforcement can shield endangered species from extinction and help stabilize the climate. But the same efforts can also damage people’s livelihoods, as forestland peoples often rely on wildlife hunting or the ability to convert forestlands to croplands to acquire food.

Ultimately, said Rakotonarivo, it is a matter of determining and respecting the trade-offs between the two often-competing needs of nature and development.

“If we restrict people’s access to forest resources, how does that impact their lives? What are the positives and negatives?” she said. “The narrative is always that conservation is good for people, if we keep the forest protected, people are going to be better off. But I’ve been trying to argue that it’s mostly about trade-offs between conservation and development activities.”

Rakotonarivo’s focus is to find ways that would make conservation beneficial to local people, so that they will have stronger reasons to support conservation activities, and so that conservation policies will be fairer to them.

“My aim was really to make policy recommendations, and design and implement interventions for conservation that are beneficial to both nature and people,” Rakotonarivo said. “That way we can lose less forest land and reduce biodiversity loss, without negative impacts to local people.”

The hard work of building trust

Rakotonarivo completed her PhD research at Bangor University in the UK in 2016, she then went on to do a postdoc at the University of Stirling. In late 2019, backed by a grant from the UK government, she returned to her home country of Madagascar and has since contributed to the reform of the protected-areas policies there. To reach these villages, it typically takes many hours of walking, she said — sometimes as much as two days’ worth.

Once in a remote village, she would begin the difficult work of identifying people who might be affected by the policies, usually farmers. She would then devise an evaluation method that could measure how forest conservation efforts affected their lives.

Part of her reform efforts were also to propose grievance mechanisms for local communities to report any issues or conflicts, and establishing trust is key, Rakotonarivo said. It’s hard to get people to talk openly about their perspective on the impacts of restrictions without that trust, and it takes time to build the necessary relationships.