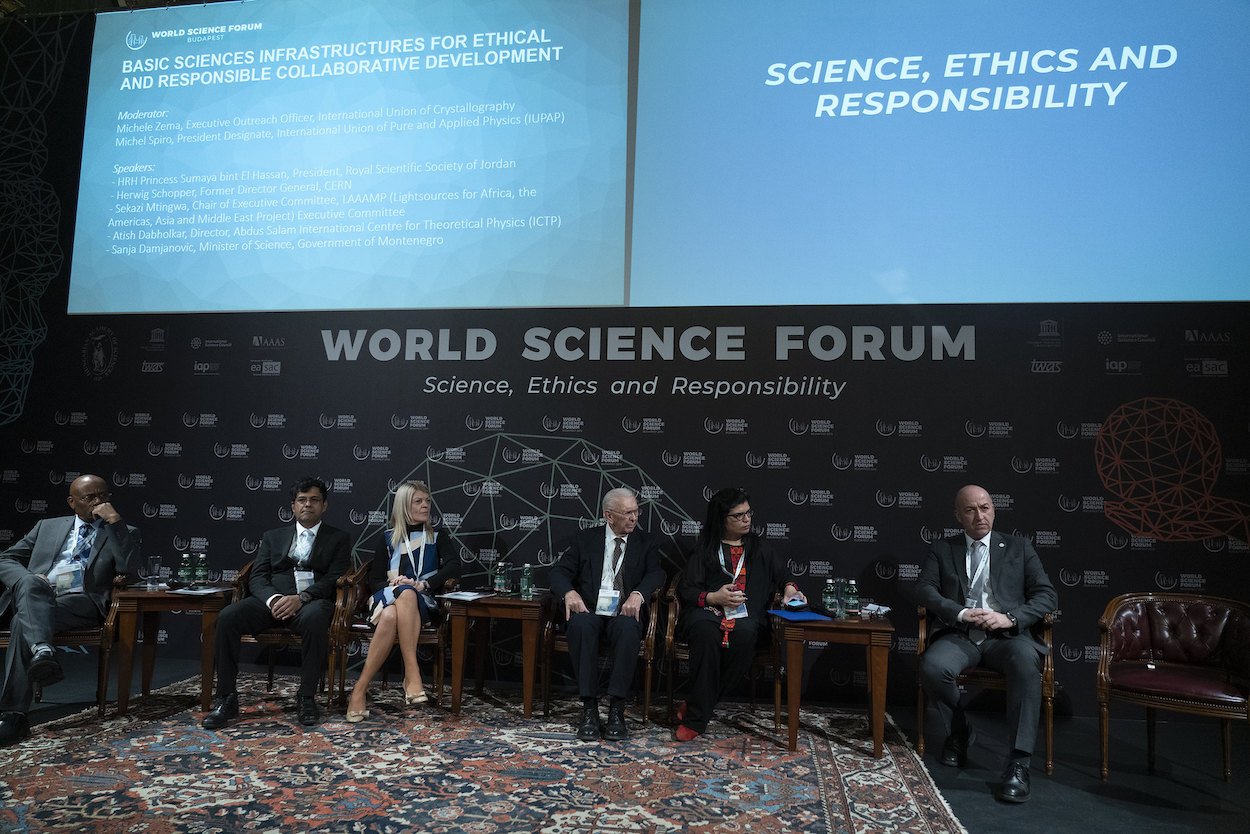 How can basic sciences infrastructures contribute to sustainable development? This question was at the center of what can be seen as the first pre-event of the International Year of Basic Sciences for Sustainable Development.

The exact title of the session organized and moderated by Michel Spiro, President of IUPAP and of IYBSSD steering committee, and Michele Zema, Executive Outreach Officer of IUCr, on Friday 22nd November 2019, at the World Science Forum in Budapest, Hungary was: “Basic Sciences Infrastructures for Ethical and Responsible Collaborative Development”.

Then, Herwig Schopper, former Director General of CERN, spoke about the benefits of science and politics collaboration, for both sides. He gave the example of CERN creation in 1954 as both a scientific and political tool after the Second World War and during the Cold War. In CERN council, every member country has two delegates, a scientific and a policy delegate.

He also told how CERN has been instrumental in the creation of SESAME, a light source built in Jordan, of which the country members list itself speaks about peace (Cyprus, Israel, Palestine, the Islamic Republic of Iran, Pakistan, Egypt and Turkey).

Sekazi Mtingwa, Chair of the Executive Committee of the Lightsources for Africa, the Americas, Asia and Middle East Project (LAAAMP) explained the strategy to implement this project, launched by the International Science Council, together with IUPAP and IUCr. The aim is to disseminate all over the world knowledge about advanced light sources. Especially, LAAAMP focuses on training of advanced light sources users in countries were there are no such sources, and on lobbying governments in order that they fund such instruments.

Atish Dabholkar, Director of the Abdus Salam International Centre for Theoretical Physics (ICTP) in Trieste explained how this teaching and research center founded by the Pakistani Physics Nobel Prize laureate Abdus Salam contributes to sharing science throughout the world. Dozens of students from the developing world have spent a year or more in ICTP, isolated scholars have been supported, and this effort is now expanded with affiliated centers in China, Brazil, Rwanda and Mexico.

Lastly, Sanja Damjanovic, Minister of Science of Montenegro, and a professional high energy physicist herself (she worked in CERn and at GSI), told about the South East European International Institute for Sustainable Technologies (SEEIIST), in the creation of which eight states from the Balkans are associated. A 4th generation synchrotron light source will be at the core of this research, technology and education center. It will provide a broad spectrum of research and industrial applications, and also a cancer therapy center based on the use of protons and heavy ions. Again, science, society and international politics are jointly improved in this project.