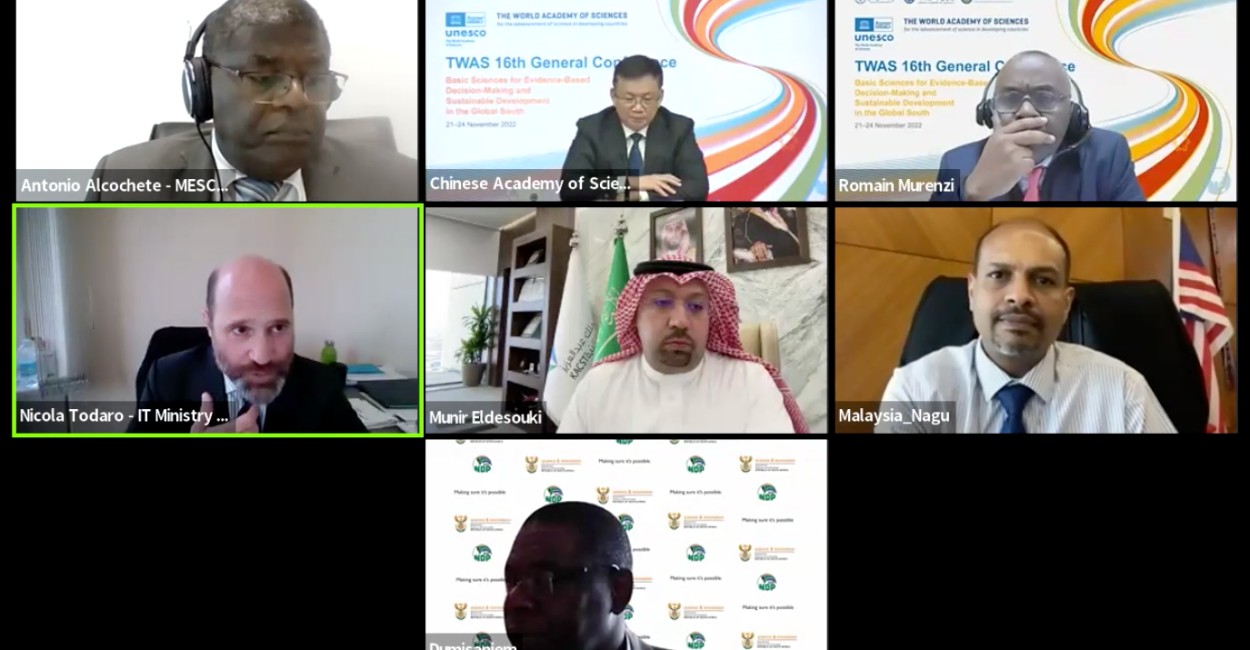 At the TWAS 16th General Conference, high-level speakers described how basic science has been indispensable in their own countries, and why support for it must be strong to achieve the Global Goals by 2030.

Basic sciences are the beating heart of the search for knowledge: without it, many of the key discoveries that paved the way for applied research and transformative technologies may never have happened. And with the numerous, global challenges facing the world today, basic research is more vital than ever.

This was the message conveyed by distinguished speakers at the traditional ministerial session at the TWAS 16th General Conference (held on 22 November, 2022). Messages delivered by dignitaries from Brazil, Senegal, Malaysia, Angola, Saudi Arabia, South Africa and Italy all united to support the fundamental practice of curiosity-driven science as a key means to enable sustainable development worldwide.

Basic sciences has long been a central focus for TWAS, which aims to strengthen science capacity across all disciplines in the developing world. Indeed, basic sciences in support of informed and sustainable development in the global South was the central theme of the Conference. UNESCO, which TWAS is a programme unit of, had even declared 2022 the International Year of Basic Sciences for Sustainable Development, with celebrations running from July 2022 to July 2023.

Hou Jianguo, President of the Chinese Academy of Sciences and co-chair of the session, called basic sciences the source of the whole science system as well as technology and innovation—an important way for human beings to explore the unknown world and a driving force for countries’ economic and social development.

“We are very delighted to see that many countries have been aware of the important role of basic sciences in enhancing decision-making capabilities and promoting sustainable development,” said Hou.

Shamila Nair-Bedouelle, UNESCO Assistant Director-General for Natural Sciences, said the theme of the session could not be more topical. The basic sciences, she highlighted, will play a vital role in discovering new materials such as for batteries that will drive important technologies such as wind turbines and electric cars.

“Basic science and basic research sometimes struggles to receive funding, largely because it is generally driven not by applicable goals, but rather by curiosity, learning and new knowledge,” said Nair-Bedouellle. “Yet we owe some of humanity’s greatest discoveries to curiosity—and these were often stumbled upon by accident.”

Ministers present and their representatives had a strong message in support of the basic sciences, including explanations of how curiosity-driven research had benefited their countries as well as advocacy for expanding resources for basic research and awareness of its impact.

Brazilian Minister of Science, Technology and Innovation Paulo Alvim noted that Brazil co-sponsored the resolution that proclaimed 2022 the International Year of Basic Sciences for Sustainable Development, and that the importance of basic science is even outlined in Brazil’s constitution. He said Brazil is planning to expand its commitment to basic sciences, and will diversify and consolidate its reach capabilities.

“Projects in the area of basic research are integrated with the efforts of entrepreneurial education, and applied human and social sciences,” Alvim said, “which contribute to efforts that impact on the production of science and technological knowledge, on the generation of wealth, but mainly on the improvement of the quality of life of our population”.

Senegal’s Minister of Higher Education, Research and Innovation Moussa Balde said the Emerging Senegal Plan, in its axis 2, focuses on human capital, social protection and sustainable development. He noted that the recent establishment of the Virtual University of Senegal has led to an open digital space network in his country.

“The important role of education as the main vector of development is recognized by the Sustainable Development Goals (SDGs),” Balde observed, “particularly SDG 4, which aims, among other things, for equitable and expanded access to higher education and research, as well as technical and vocational training.”

Secretary-General of Malaysia’s Ministry of Science, Technology and Innovation Dr. Haji Aminuddin bin Hassim—representing Malaysian Science, Technology and Innovation Minister Dr. Adham bin Baba—said that countries everywhere are pursuing concrete actions to achieve solidarity and sustainability through science diplomacy. Malaysia, he noted, is now developing a national planetary health action plan, and a key aspect is to ensure solutions for a future society that is people-centric and nature based.

“As basic science is driven by curiosity, it is important to nurture young minds to an inquiry-based science education approach to create collective and critical thinkers,” said bin Hassim.

“Basic sciences provide the essential means to face crucial challenges which are linked to SDGs, such as universal access to food, energy, health coverage, and communication technologies,” said Bragança, “playing a relevant role to ensure a balanced, sustainable, and increasing development of the planet.”

Munir M. Eldesouki, president of King Abdulaziz City for Science and Technology in Saudi Arabia, said that Saudi Arabia has seen a surge in scientific publications and recognition for advancements in innovation. Roughly 50 percent of public research and development funding in Saudi Arabia has gone to basic research, which resulted in these achievements.

“The Kingdom [of Saudi Arabia] will continue funding basic research,” Eldesouki noted, “but will also shift towards more applied and technology driven research to tackle its challenges and to achieve sustainable economic growth.”

The conference came at an opportune time when South Africa, he added, because its department of Science and Innovation is finalizing its plan to implement the White Paper on Science, Technology and Innovation that the nation adopted in 2019.

For Italy, Nicola Todaro Marescotti, Diplomatic Advisor at the Ministry of University and Research, welcomed participants and wished them a fruitful meeting on behalf of the Minister Anna Maria Bernini. He said it is important to make citizens aware of the key role of basic sciences and researchers are called on to cooperate in this “outreach effort”. In this respect, a quality higher education system is of paramount relevance.

“Basic sciences and basic research play a crucial role in helping to effectively achieve the Sustainable Development Goals,” Marescotti added, highlighting the role of TWAS which is financially supported and hosted by Italy in Miramare.