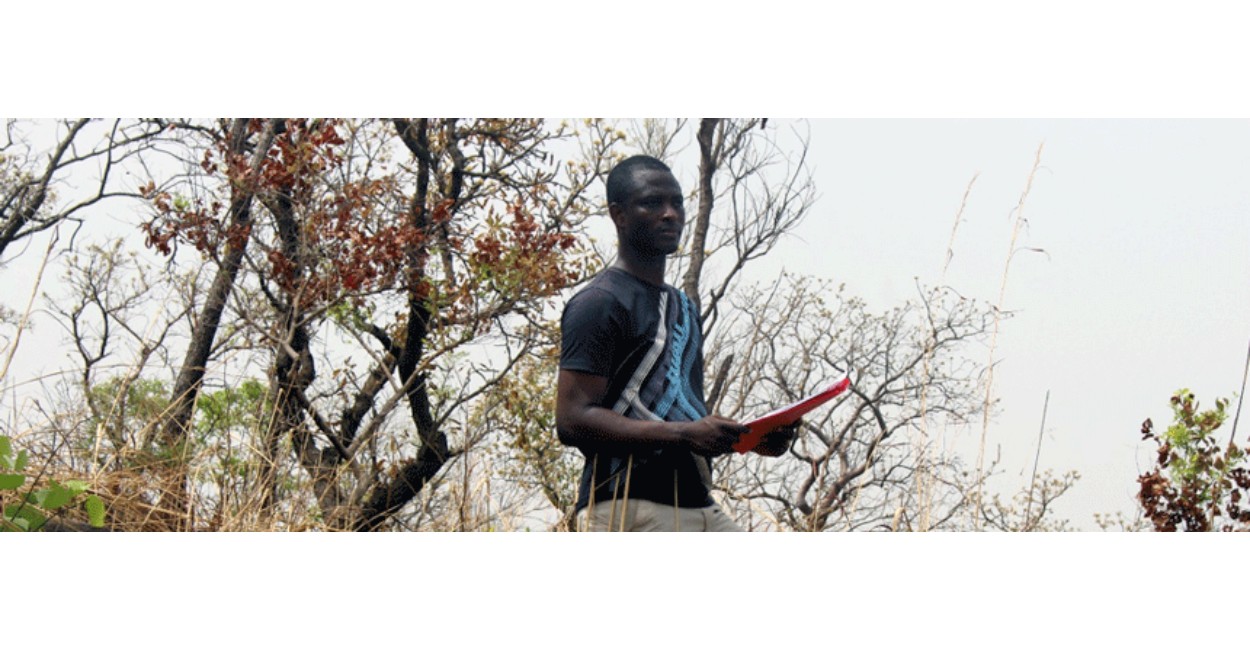 Conservation biologist and TYAN member, Kangbéni Dimobe of Burkina Faso, is engaging in the protection of local biodiversity and lands.

Burkinabé environmental scientist Kangbéni Dimobe’s career in forestry research may still be young, but it has been outstandingly productive. What drives it? An innate passion for the environment and botany, but also a commitment to social causes.

Dimobe is an assistant professor at the Institute of Environmental Science and Rural Development, University of Dédougou, in Burkina Faso. There, he teaches forestry, geographic information systems (GIS) and remote sensing, silviculture—the practice of woodland cultivation—and ethnobotany—the study of how regional populations make use of native plants. In 2020, Dimobe was elected as a TWAS Young Affiliate, a distinction that acknowledges his commitment to the environment and protecting biodiversity from the disruptions of climate change.

Burkina Faso is, in fact, a hotspot for diversity. According to The Convention on Biological Diversity, the country has 128 species of mammals, 516 species of birds, 1,515 species of insects, and almost 2,000 species of flora, but has been suffering from recurrent droughts since the 1970s. In addition, the country is often ravaged by bushfires and subject to overgrazing, which endanger the agricultural areas and the native flora.

“Human activities are affecting Burkina Faso in various ways,” he explained. “Land-use changes due to deforestation, for example, affect bee pollinator communities. In addition, we are recording water shortages over major West African river basins due to climate change, increased mortality or reduced growth of seedlings of valuable savanna trees due to specialized natural enemies such as fungi, herbivores (especially sheep and cow) and soil pathogens which often maintain biotic interactions with their hosts. As a scientist, and also as a TWAS Young Affiliate, I’m keen on finding ways out to these problems.”

TWAS Young Affiliates are outstanding young scientists under the age of 40, selected each year by TWAS in collaboration with the Academy’s five Regional Partners. After five years, in which they are encouraged to participate in Academy activities, they become Alumni. To date, there are more than 350 TWAS Young Affiliates and Young Alumni from 80 countries.

Dimobe earned his first master’s degree in botany in 2007 and his second in applied plant biology in 2010, both from the University of Lomé, in Togo. Then, he obtained a PhD scholarship to engage in the West African Science Service Centre on Climate Change and Adapted Land Use (WASCAL) programme on climate change and biodiversity, hosted by Joseph Ki-Zerbo University, in Burkina Faso, and Rostock University, in Germany, where he spent six months as a visiting scholar in the Department of Botany and Botanical Garden. In 2017, he obtained his PhD, and until 2020 he worked with WASCAL as a research scientist and member of the Earth Observation Applications Unit.

During these years, he acquired expertise in GIS technology and remote sensing techniques, which he is now using to map vast land areas in Burkina Faso and beyond. GIS is a computer-based tool for mapping and analysing things that exist and events that happen on earth.

“We used satellite data from the Landsat system (Earth-observing satellites) of the U.S. Geological Survey to explore the changes in land use and land cover induced by (also illegal) human activities,” he explained. “The study showed that, until 2001, land degradation was mainly due to the reduction of tree savannas and woodland, and the expansion of bare soil. But from 2001 until 2016, bushfires, wood harvesting, and, in general, the improper use of land were the leading direct causes of such changes.”

Further to these and other findings, he started organizing village workshops and activities targeting local communities, which were carried out in the local dialects—Mooré, Dioula, Gourmantchema, Kasséna and Dagara—to encourage local populations to adopt more environmentally sound habits.

In another study, Dimobe and co-authors assessed the impact of climate change on the distribution of the shea tree, an economically important fruit tree native to savanna regions. To investigate the impact of temperature, precipitation and humidity changes on the spatial distribution of shea trees, he used a combination of GIS and modelling techniques, which allowed him and his colleagues to forecast the current and future distribution of these trees across the landscape.

“We knew that overexploitation and changing land use were threatening this important resource, but we had no clear idea of the role of climate change,” he admitted. “The study showed that climate change will likely affect the tree habitat by 2050 and 2070. With this information at hand, we could provide policymakers and conservationists with valuable information for the conservation management of this important and endangered species.”