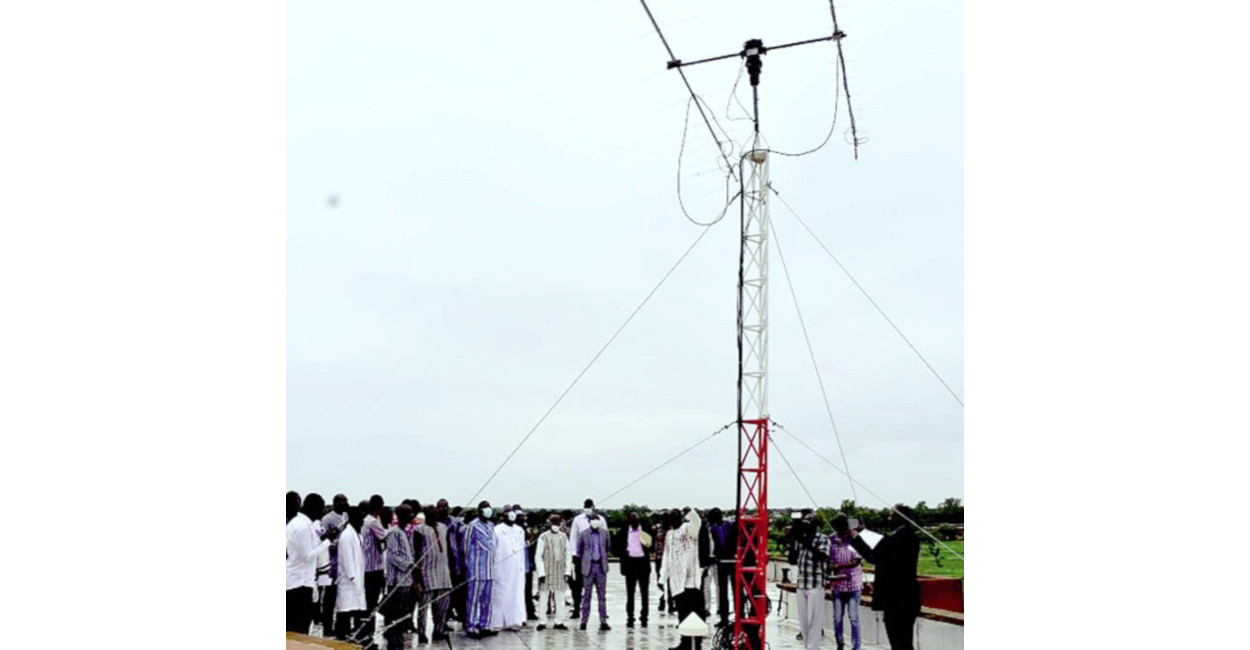 The reception of a satellite ground receiving station prefigures the mastery of space techniques for Earth observation.

The project of the first satellite “made in Burkina” called Burkina Sat-1, is further concretized with the reception on 27th August 2020 of the ground station of this device.

Located at the Norbert Zongo University in Koudougou, about a hundred kilometers from the capital Ouagadougou, the ground station is a UHF/VHF antenna attached to a five-meter high mast, a UHF/VHF radio transmitter and receiver module, a satellite control device, a computer, a display screen, etc.

The astrophysicist Fréderic Ouattara, designer of the project, explains that the antennas will allow communication with the satellites passing over the station. Specifying that the VHF antenna will be used for reception while the UHF will be used for the transmission of data from Burkina-Sat1.

The reception of the ground station marks the end of the first phase of the Burkina Sat-1 construction project. The second phase will involve the construction of the satellite cube.

According to Frédéric Ouattara’s explanations, they must now assemble the various elements necessary to obtain a functional satellite able to orbit around the earth and communicate with a ground station to transmit and receive data.

“The project is going well and is progressing normally according to our forecasts. We are in the process of acquiring the various components of the satellite. The control of space will enable us to solve the fundamental problems of the Burkinabè people. The priority of the Burkinabè is to have drinking water, health care and food. The satellite will meet these basic needs,” said the researcher, who was elected best African space physicist in 2018 by the American Geophysical Union.

Indeed, SciDev.Net learned from the design team that Burkina Sat-1 will be responsible for rainfall forecasting, building capacity for resilience to climate change and detecting available water resources. It will also enable agro-pastoralists who are transhumant to locate biomass and water wells.

This scientific observation satellite, for civilian use, will also eventually make it possible to measure plant cover, detect underground water resources, help combat the advance of the desert, and prevent diseases such as meningitis and other respiratory ailments.

Already, says geophysics PhD student Sibri Alphonse Sandwidi, who is a member of the design team, the ground station has recorded images from American satellites that have made it possible to monitor in real time the evolution, probability and intensity of precipitation and temperature in recent times.

For Alkassoum Maïga, Minister of Scientific Research, the conquest of space is of definite interest for the country. “If there is only one project that needs to be advanced, it is this one. It is of strategic interest, if only for our food security, to prevent disasters and certain diseases,” he said at the reception ceremony of the ground station.

As for Roch Kaboré, Head of State of Burkina Faso, he indicated in a tweet on September 3 at the end of his audience with the astrophysicist that “the Burkina Sat1 project, which is set to develop further in the years to come, reflects the spirit of boldness of our scientific and academic community. The government will ensure that they receive the necessary support”.

The Association for the Development of the Rural World (ADMR), is also aware that civilian satellite imagery is a real operational tool for decision support. Jean-Victor Ouédraogo, its Executive Secretary, illustrates this by recalling that images are used for a large number of agricultural applications.

He mentions in particular the monitoring of the evolution of cultivated land, the control of farmers’ declarations for the agricultural subsidy policy, early warning systems for food security, agricultural insurance, the creation of rural cadastres and precision agricultural services.

This initiative is also welcomed by researcher Sylvère Salga, designer of the Tensis System, a system that aims to bring about a second rainy season in Burkina Faso. He welcomes the project and reminds us that “science is not only for developed countries. We have to leave the school of knowledge consumption to that of knowledge creation”.

He is therefore convinced that with this space conquest, the short-sighted development of Burkina Faso will give way to a multidimensional development.

“Few African countries have a space agency. This absence has an impact on agriculture and livestock,” adds Jean-Victor Ouédraogo.

Indeed, with this program, Burkina is one of the first French-speaking African countries to embark on the space adventure.