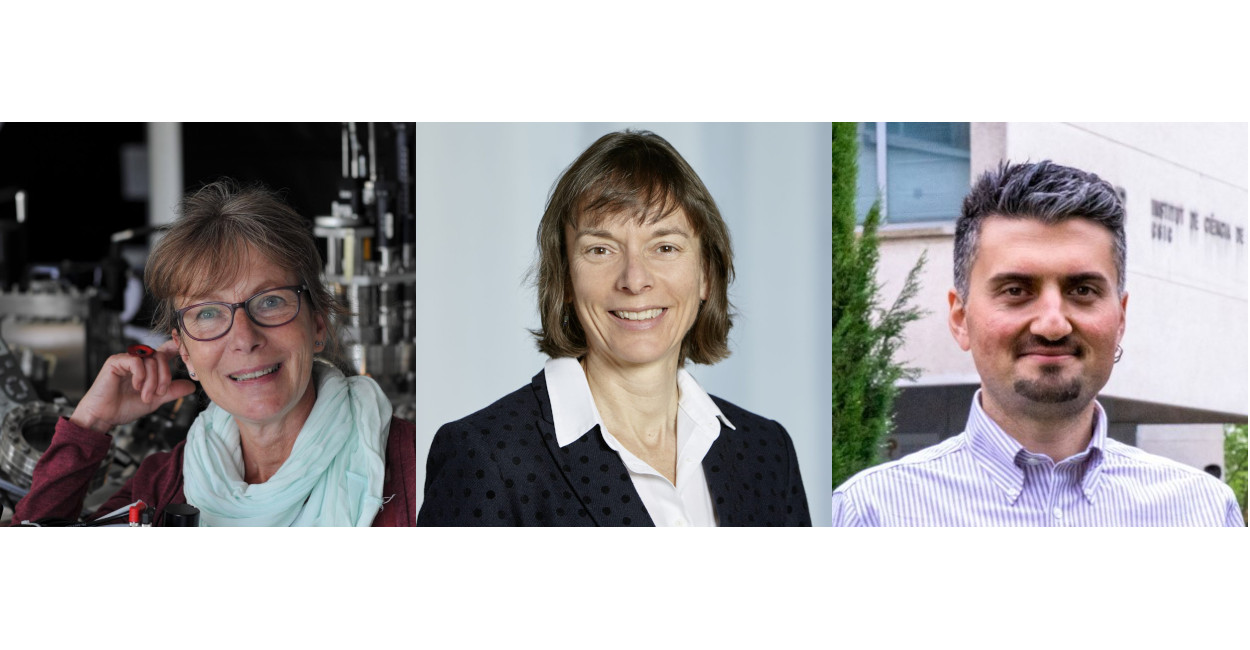 The IUPAP Commission on Magnetism annouced the laureates of its 2021 awards.

The IUPAP Commission on Magnetism is pleased to announce that the 2021 IUPAP Magnetism Award and Néel Medal will be awarded to: Agnès Barthélémy, University Paris-Saclay / Unité Mixte de Physique CNRS-Thales, France, and Nicola Spaldin, ETH Zürich, Switzerland, “For pioneering contributions to the fundamental and applied science of magnetic and ferroelectric materials, particularly multiferroics”.

Established in 1991, the IUPAP Magnetism Award is made in recognition of outstanding contributions to fundamental and applied magnetism. It is presented every three years at the International Conference on Magnetism (ICM). The Néel Medal is awarded together with the Magnetism Award, since 2003, sponsored by CNRS and Institut Néel.

A monetary award for the winner(s) is generously sponsored by Elsevier. This year’s award will be presented at the 2022 ICM, to be held in Shanghai, China, during July 3-8, 2022.

Agnès Barthélémy is a Professor at University Paris-Saclay and a researcher at Unité Mixte de Physique CNRS-Thales. After a PhD thesis on giant magnetoresistance and perpendicular anisotropy in magnetic metallic multilayers, she reoriented her research in 1998 and developed at Unité Mixte de Physique CNRS/Thales a new direction of research on “multifunctional oxides”.

This encompassed researches on magnetic tunnel junctions with record of tunnel magnetoresistance using half metallic manganite electrodes, ferroelectric tunnel junctions with demonstration of their potential for memory or neuromorphic computing, high mobility two-dimensional electron gases at oxide interfaces, multiferroic materials and heterostructures opening the way to electrical control of magnetic state. She was awarded the Louis Ancel prize of the French Physical Society in 2008, the Silver medal of CNRS in 2010, the Nikola Tesla prize of the Petrović Njegoš foundation in 2015 and the Lazare Carnot prize of the French Academy of Sciences in 2017.

The other one works in Switzerland

Nicola Spaldin is a Professor of Materials Theory at ETH Zürich and a Fellow of the Royal Society. She is best known for her development of multiferroic materials, which combine simultaneous ferromagnetism and ferroelectricity, for which she received the APS McGroddy Prize for New Materials, the Koerber European Science Prize, the L’Oréal-UNESCO For Women in Science Award and the Swiss Science Prize Marcel Benoist.

She is a passionate science educator, coordinator of her department’s curriculum revision project “The Materials Scientist 2030, Who is She?”, and holder of the ETH Golden Owl Award for excellence in teaching. When not trying to make a room-temperature superconductor, she can be found playing her clarinet, or skiing or climbing in the Alps.

The IUPAP Commission on Magnetism is pleased to announce that the recipient of the 2021 IUPAP Young Scientist Prize in the field of Magnetism is:

Can Onur Avci, Institute of Materials Science of Barcelona, Spain, “For outstanding contributions to understand current-induced spin-orbit torques and electrical control of the magnetization in magnetic insulators, and for the discovery of unidirectional spin Hall magnetoresistance.”

Established in 2016, the IUPAP Young Scientist Prize in the field of Magnetism is awarded every year to a young scientist for theoretical or experimental work in fields of fundamental or applied magnetism. This annual award replaces the two prior awards for theoretical/computational work and for experimental work established in 2006, which were awarded every three years at the International Conference on Magnetism (ICM).

A Spain based laureate

Can Onur Avci is a principal investigator at the Institute of Materials Science of Barcelona (ICMAB-CSIC) since February 2021. He received his Ph.D. degree from ETH Zürich in 2015 and was awarded the ETH Medal for outstanding doctoral thesis.

He was a postdoctoral researcher at the Massachusetts Institute of Technology between 2016-2018 and at ETH Zürich between 2018 and 2021. He recently received an ERC Starting Grant to develop spintronics devices based on magnetic insulators. His research focuses on spin-orbit-driven phenomena and spin currents in low dimensional systems, electrical control of magnetization, and spintronic memory and logic devices.

This article is based on a IUPAP publication.