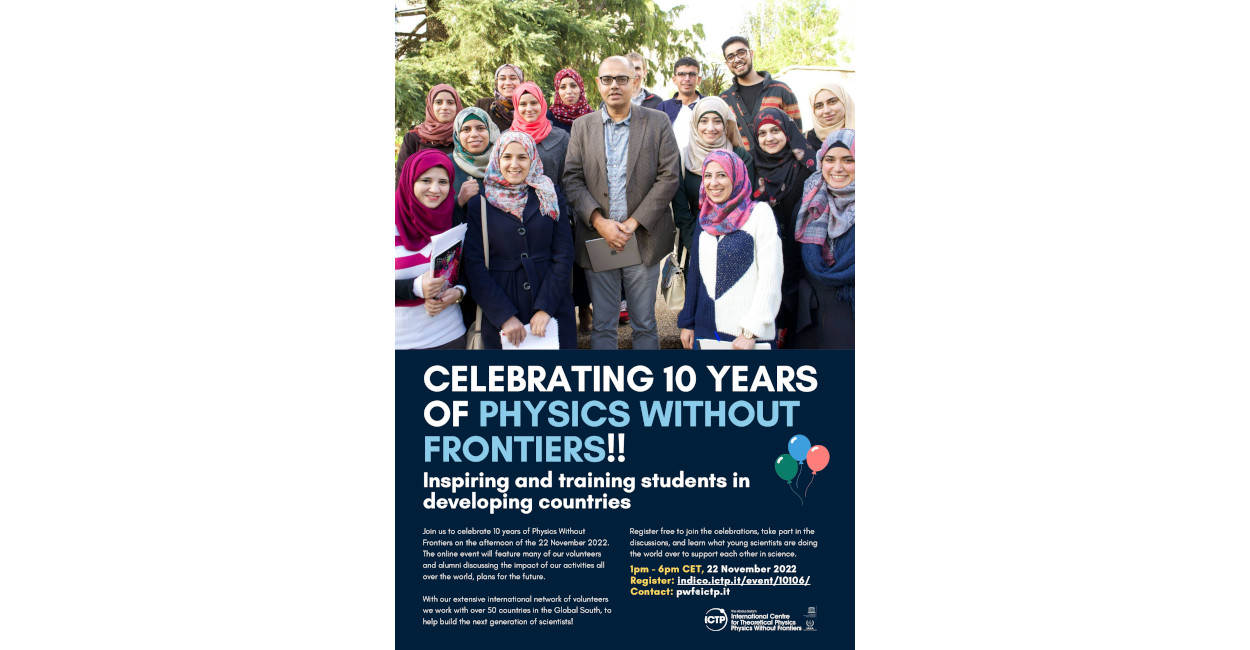 Physics Without Frontiers (PWF), ICTP’s flagship outreach programme for university students, is celebrating its 10th anniversary this year. What started as one physics master class roadshow by a small group of volunteer scientists from ICTP and CERN for university students in Palestine has blossomed into an international network of instructors catering to the science education needs of regions throughout the developing world.

The programme will celebrate its 10th anniversary with a hybrid event at ICTP on 22 November from 13:00 to 17:30 CET. The occasion is open to all and will include talks by guest speakers as well as panel discussions and case studies highlighting PWF activities that have taken place in far corners of the world. The full programme is available here.

PWF creators Bobby Acharya and Kate Shaw, both ICTP particle physicists and members of CERN’s ATLAS experiment, remain at the helm of the programme, which aims to inspire students in science- and technology-lagging regions to consider a career in scientific research. PWF achieves this by organising educational and training activities such as university courses, workshops or roadshows, working closely with local volunteer scientists to tailor the activities to a country’s needs.

“Many regions of the world are lagging behind in important areas of fundamental physics and mathematics education and research,” said Bobby Acharya, adding that as a result, young people from those regions simply lack the knowledge, skills, training and opportunities to become researchers in those areas of science. “PWF was created to address these problems,” he explained.

“Every student should have opportunity no matter their background,” said Kate Shaw. “PWF was created to bridge the education gap with its network of volunteers and provide resources to scientists wishing to run activities in their countries to help build the next generation of scientists.”

The dedication of Acharya and Shaw, along with that of PWF’s 100 volunteer instructors, to PWF’s mission has paid off: in its 10 years of existence, PWF has reached more than 10,000 students through more than 300 activities in at least 50 countries. Some 300 students have continued their science studies at the masters and PhD levels thanks to the programme.

The success of PWF has prompted Acharya and Shaw to dream of expanding the programme to inspire even more students. “I would like us to build on the existing strengths of the programme, reaching more regions and communities where PWF activities can have an impact,” explained Acharya. “As the global network of PWF participants and volunteers grows, so too will its impact. The global scientific community ideally should be as richly diverse as the global human population itself.”

“The alumni we keep in touch with are very much a key success of the project, each have inspiring stories,” said Shaw, “But I would say the success that I feel is many happy smiling faces at the ends of our activities. Hundreds of students receive a wonderful experience, getting the opportunity to talk to scientists and work on analyses or learn new fields of research; the feedback I get is heart-warming.”